With faces old and new, ‘Dallas’ makes a comeback

LOS ANGELES – It’s a good thing that J.R. Ewing only shot himself in a mirror in the final episode of “Dallas” back in 1991. Now he can rejoin the rest of the gang for a revival of the cult TV series. 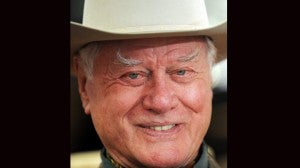 Larry Hagman, 80, who portrayed the greedy Texas oil baron from the outset, stars in the freshly-minted episodes that will start going out Wednesday on the TNT cable television channel.

And he’s not alone – Linda Gray, 71, is returning to play his alcoholic wife Sue Ellen, and Patrick Duffy, 63, will reprise his role as Bobby, J.R.’s altruistic kid brother.

“I feel so blessed, honestly,” said Gray in the production notes for the new series that will also introduce a new generation of the Ewing clan.

“It was surreal when they first announced it would return. We were just absolutely thrilled.”

Reaching back to the original talent pool makes “Dallas” a stand-out among other revivals of landmark US television series, such as “Melrose Place” and “Beverley Hills 90210,” that failed to make a deep impression on viewers.

The original Emmy-winning series of “Dallas” ran from April 1978 to May 1991, fascinating viewers across the United States and beyond with a soap-opera storyline rich in power, sex and intrigue.

“When ‘Dallas’ was on, we were in a major recession and people couldn’t go out because they couldn’t (afford to get) a babysitter, so they had to stay in on Friday night and watch something and we were it,” Hagman recalled.

“And here we are again.”

“Dallas” was famous for its season-ending cliffhangers, not least the “Who shot J.R.?” whodunnit that left “Dallas” fans in a state of high suspense in the summer of 1980. The shooter turned out to be his sister-in-law.

It wasn’t even clear when the series ended for good in 1991 whether a then-suicidal J.R. had shot and killed himself. Only in a reunion movie five years later did it emerge that he’d only shot his image in a mirror.

“The bitter rivalries and family power struggles within a Texas oil and cattle-ranching dynasty” remain at the heart of “Dallas” in its new incarnation, TNT said.

But fans can look forward to a new generation to keep up the drama.

John Ross Ewing, every bit as Machiavellian as his father, will be portrayed by Josh Henderson, while Jesse Metcalfe has the role of Christopher Ewing, the adopted son of Bobby and his wife Pamela.

Both will be familiar to those who watched “Desperate Housewives,” on which Henderson played the nephew of Nicollette Sheridan’s character Edie Britt and Metcalfe played the gardener who loved Eva Longoria’s Gabrielle.

Also written into the storyline is a girlfriend for Christopher, Rebecca Sutter (played by Julie Gonzalo), and the daughter of a former Ewing family cook, Elena Ramos (Jordana Brewster).

Penning the script is Cynthia Cidre, whose past screenwriting credits include the 1992 film “The Mambo Kings” starring Antonio Banderas.

It’s the first time that a woman is responsible for steering the plot – and Gray welcomed the move.

“The original Dallas was very male-focused,” she said.

“The script was really about the men, and the women were the victims, as in Sue Ellen’s case.

“We were the bookends and reactors; the men did something and we reacted,” she added.

“We had male producers, writers; everybody was male. When I saw Cynthia’s name on the cover of the script, I thought, ‘Isn’t this great!’ Women have come into their own empowerment. So for me, at this time in 2012, having a woman as the writer is extraordinary.”