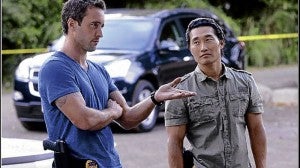 LOS ANGELES—“I’m doing great now,” said Alex O’Loughlin in an interview in LA last Wednesday. He spoke for the first time about his break from his TV show, “Hawaii Five-0,” after checking into rehab last March.

The actor, looking fit, tan and sporting a full beard, underwent supervised treatment for prescription pain medication due to injuries he sustained while doing the hit CBS series.

“I got hurt pretty bad on the show and I ended up taking painkillers to get to work,” said the actor who plays Steve McGarrett in the successful reboot of the show that originally starred Jack Lord. “I had trouble getting off them. That’s as complicated as it gets.”

Alex added that he “gets knocked around a lot on the show. I do a lot of my own stunts and I have done so from the beginning. I am not 20-something anymore as you can see from the dusting of grey on the sides of my head.”

The Australian actor admitted: “It was really difficult for me to be away. The hardest part was like when something is so enormous in your life—I’m at work 14 hours every day—and then all of a sudden, you’re not at work. I got a lot of letters and messages from people saying, ‘Where are you?’ or ‘It’s so weird not to see you in the show.’” 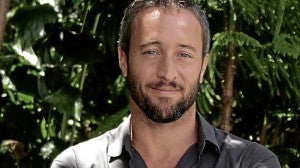 O’LOUGHLIN on the day of the Inquirer interview photo by Ruben V. Nepales

Being away from the set has made Alex realize a few things. “Probably the biggest thing is how responsible for the show I actually feel,” he said. “I don’t know if that’s my job to feel that way or whatever.”

He gushed: “Personally, I’m fantastic. It’s like nothing happened. I am still doing physical therapy three times a week. I’m back and doing lots of jiu jitsu. I’m surfing, running, doing all that stuff. I just have to say no to some of the stunts that I love doing so much. I enjoy doing that stuff but I’ve learned to let the stuntmen do those.”

Blessed with Aussie humor, Alex’s face lit up when asked about his fans. “I’ve got really fantastic fans from all over the world,” he said. “One of the errors of my career was doing a vampire show (‘Moonlight’). The fans that I got from that show are very committed. They will never ever see me as anything other than Mick St. John.”

Asked about the strange gifts he gets in his fan mail, Alex smiled as he revealed, “I receive underwear—some clean, some not. No joke. My assistant who helps me with my fan mail constantly threatens to quit because of what we get sent… More from the Europeans… avant-garde type Germans, French, Dutch…I see the Amsterdam postmark and I’m like… you know. I get the bras… ”

His kind of gal

As for the kind of woman he goes for, Alex said: “She has to be smart and funny. Funny is really important. If a day goes by and we haven’t been laughing, then I get really sad. Life is so ridiculous that if you can’t see the irony of it, you’re going to have a really hard time while you’re here. Brains and common interests are important, too. I need to be able to admire the woman I’m with and to look up to her. And for her to have the things that I want to have more of in myself, like integrity and dignity. I want to have an equal partner. I don’t want to be a boss and I don’t want to be too much like an underling, either. I want to be right there with her.”

For “Hawaii Five-0” fans, Alex offered some hints as to what to expect: “The final realization for McGarrett is enormous. It flips the whole game on its head. Everything’s changed. The nature of everything he thought about that had been going on, he’s got to go back and reevaluate not only how he feels about everything but also of the information that he’s had. All of the clues that he’s been following, this investigation that’s ongoing about the death of his parents, who’s behind it and who’s filtering the information.”

He cited that “McGarrett is such a strange character to play. Over the last couple of years, we’ve found, especially with his relationship to Danno (Scott Caan’s character), more comedy and bits of chemistry to break up that hard military kind of backbone. But McGarrett is still this guy who gets locked in on something. Nothing will stop him. This is going to complicate his world even more. He’s probably going to become even more paranoid and even more difficult for Danno and the other guys to work with, which also leads to more comedy. But I’m looking forward to it.”

Alex has no complaints about working in what many consider is paradise. “I think the reason I’m so comfortable in Hawaii is because I leave a lot,” he explained. “I love it there. I own a house there. My son (Saxon) is with me and he goes to school there. I don’t get island fever because, like I said, I leave a lot.”

His son, Saxon, is almost 15 and very athletic, said Alex. “I’ve been promising to take him snowboarding his whole life which essentially makes me a neglectful parent, doesn’t it? Because it took me 15 years to do it. I’ve taken him to do virtually everything else. He surfs every day. He does a lot of stuff but he’s like, ‘We got to go snowboarding.’ I thought, OK, since it has taken me so long, I’m going to take him somewhere really special, where the snow is really good. I took him to Charmonix (France). He did great. He snowboarded for four days. I snowboarded for about a day and a half and then spent the next two days with ice packs on my hips. I had a great time. I love Europe. I don’t speak a lick of French but I speak a bit of Italian. I can get through Italy better than I get through the rest of Europe.

“Hawaii Five-0” also stars Daniel Dae Kim, Grace Park and Masi Oka. “Scotty comes back to LA,” Alex replied when asked about how his costars spend their breaks from shooting. “He is doing a play here in LA. This is his home and I feel that he’s more comfortable in LA than he does over there. I think Grace might feel the same about Canada. She goes back when she gets the chance. Daniel lives in Hawaii and is building a house there at the moment. We’ve all managed to make it an interesting experience because each character has different arcs. We come together and work as a team.”

E-mail the columnist at rvnepales_