Rocking the ‘Rock of Ages’ 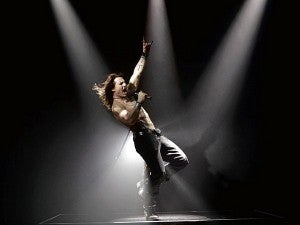 MANILA, Philippines—Director Adam Shankman’s vision for “Rock of Ages” was to make a new kind of musical, one that fuses together popular songs from the 1980s to tell a story about a handful of characters who come together to find—or rediscover—their passion and realize their dreams.

The filmmakers worked with screenwriters Justin Theroux, Chris D’Arienzo (who wrote the play) and Allan Loeb to adapt the play for the big screen.

Rock of Ages unfolds through the eyes of small town girl Sherrie (Hough), who travels by bus to the Sunset Strip from her home town of Enid, Oklahoma. Drew (Boneta), a young barback and aspiring singer, comes to her aid when her beloved records are stolen. Drew gets her a job at The Bourbon Room, and the two form an instant bond over their shared passion and rock ’n’ roll dreams.

Julianne Hough and Diego Boneta are the youngest actors in the core cast and, in the director’s mind, share one essential quality with their characters.  “What I love about Diego and Julianne is that they’re so authentic because they are living the life that these characters are,” he explains.

Hough (pronounced “Huff”) is an actress/singer/dancer who shot to fame as the two-time champion of the US TV series Dancing with the Stars before appearing in her first film, Burlesque, followed by Footloose.  As Sherrie, most of her scenes are with Boneta, who plays her soulmate Drew. 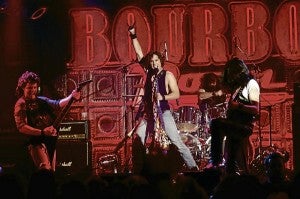 “Sherrie starts out in this movie very wide-eyed and excited,” Hough says, wearing her character’s mass of long, blond waves.  “She’s in LA and she’s seeing dangerous people and getting mugged, but she’s optimistic.  And then, over the course of the film, you see her change.  Her arc in the movie goes from, ‘It must be like living in paradise’ to ‘I’m going to harden my heart,’” she says.

Diego Boneta was chosen amid hundreds of hopefuls for the role of Drew.  When he got the call from Shankman that he’d been cast, “It took a while to sink in,” says the 22-year-old with a powerful singing voice and boyish good looks. He identifies with his character.  “First, he has his love of music,” he says. “And second, he doesn’t give up. He has his dream and any sacrifice, any obstacle that’s thrown at him, he will overcome. I think a lot of people can relate to that hunger and that passion.  When he sings, it comes from the heart. That’s what I think defines a rock star—the performance comes from within, not outside of yourself.”

Both characters have been drawn to The Bourbon Room-a high altar to rock ’n’ roll run for years by a man who is in it for the music, not the money:  Dennis Dupree, played by Alec Baldwin. “Rock ’n’ roll is his life,” Baldwin says.  “To him, this is like a church in a way.  It’s a place where people come for the music.  It’s a religion to them, so I guess in that way he’s a minister.  And even though the music of that style and that time was very wild, it’s still music; it’s their music and that’s really their belief.” 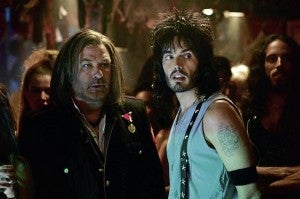 Russell Brand plays his partner-in-crime and cohort Lonny Barnett—a friendship Brand calls a “double act.”  “In comedic tradition, double-acts exist forever on the precipice of never talking to each other again, but it’s a kind of tension between them because they have a great deal of affection for each other,” Brand describes.

“I’ve done comedies before, but nothing in the world could have prepared me for what an incredibly clever, brilliant, funny, alive person Russell is,” Baldwin raves.

Threatening The Bourbon Room is ambitious politician Mayor Mike Whitmore, played by Bryan Cranston (TV’s Breaking Bad) in a cameo role, and his crusading wife, Patricia Whitmore, played by Catherine Zeta-Jones, who leads a brigade of women bent on ridding the streets of all things rock ’n’ roll.

Zeta-Jones says she leapt at the chance to sing and dance again after her Oscar-winning turn in Chicago.  “When Adam Shankman called me, I said yes without even looking at the script,” she recalls.  “And then I read the script and thought, ‘Wow, what a fun character. I thought I could have so much fun with her, and I have. The whole experience is so much fun.’” 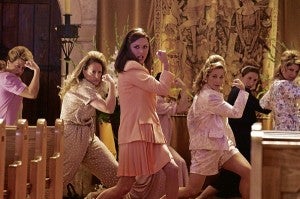 In one sequence, Tom Cruise, as rock god Stacee Jaxx, takes the stage to belt out a whiskey-soaked rendition of Def Leppard’s anthem Pour Some Sugar on Me in front of hundreds of screaming locals packed into the club.

All night, Shankman tells us, through take after take, the crowd acted like fans at a rock concert rather than movie extras clocking in a day’s work.  “I’ve been reading online and all over the Internet people were posting that this was the best rock concert they’d ever seen,” he marvels.  “And I’m thinking, ‘But you weren’t at a rock concert.  You were shooting a movie.  You had to sit and watch it over and over again, with somebody nobody even knew could sing before this.’”

Wearing his character’s leather pants with a big western belt, no shirt over his tattooed chest and back, and a battered cowboy hat over hair that extends down to his shoulders, Cruise is transformed.

Cruise took the crowd by surprise with his vocal chops, but not the director.  “The joy at having discovered that he can sing was a huge relief,” Shankman admits, recalling that both he and the actor had long wanted to collaborate on a project when Rock of Ages came along.  “There was a moment when we were looking at each other and Tom said, ‘Well, what if I can’t sell this?  Because I won’t do it if it’s not me singing.’ With everything he does, from stunts to performing in front of an audience, it has to be him doing it.  He believes his audience has come to expect that, and why bother doing it otherwise?  But this is what he loves.  He loves making movies and he wants to be really good, so he works harder than anybody at it.”

But where he’s usually jumping off buildings or brawling with stuntmen, for Rock of Ages, his task was to convincingly play guitar, sing and move like a rock star.  “His work ethic is an unbelievable learning experience,” Shankman notes.  “He works so hard that he ends up really selling it.  There is no sign of Tom Cruise there; there is only the character.”

Malin Akerman plays the Constance Sack, the reporter whose attempt to interview Stacee results in the confessional song. Swedish-born and raised in Toronto, Canada, the tall, blond actress had a unique perspective on the film, having been a singer in a band that played in clubs not that different from The Bourbon Room.  She gets to revisit her singing chops in the film, in a duet with Cruise of Foreigner’s 1984 power ballad “I Wanna Know What Love Is.” “Our love scene is a mix of funny and true,” she says.

Stacee Jaxx’s devious manager Paul Gill is played by Paul Giamatti.  “I basically play a scumbag,” Giamatti laughs in a break before cameras roll.  “He’s kind of a goofy villain, and Adam has just let me have fun with him, which is really nice.  He keeps saying, ‘It’s a musical; you can do that.  Don’t worry about it.’ He’s a lovely guy and very funny.  I really am enjoying it.”

The final member of the core cast is platinum-selling musical artist Mary J. Blige as Justice, who takes Sherrie in when her dreams begin to fray.  Justice runs the Venus Club—a gentlemen’s club on the Strip—where she gives Sherrie a job. “I believe what Justice sees in Sherrie is herself,” Blige says.  “She’s been down that road, so she understands where Sherrie is with her self-esteem.  She’s there to show Sherrie how to take her power back.”

For all her accomplishments in music, Blige’s dedication and humility in the face of her first onscreen role is striking.  “Just like in my day job, which is as a singer, I have to learn routines,” she explains.  “And when I have to cover a song that another artist performed, I have to study very, very hard and practice very, very hard.  So, for this film, I rehearsed day and night, as long as we had to get it right.”

Blige even got a vote of confidence from her veteran cast-mate.  “I never thought in a million years when I was growing up that I’d be working next to Tom Cruise, whom I loved in Risky Business,” she laughs.  “The first piece of advice he gave me was when we did the table read.  I said, ‘Should I be worried?’ He said, “‘No, it’s not worry time, you’re gonna rock this.’”

Opening across the Philippines in June 14, “Rock of Ages” will be distributed worldwide by Warner Bros. Pictures, a Warner Bros. Entertainment Company.