Althea Ablan and Bruce Roeland, the young onscreen tandem that is based on real life, are one of the brightest examples of what happens when you have two actors that in many ways are truly meant to be together both onscreen and offscreen. Plus, they clearly bring the best out of each other.

I was able to conduct an exclusive interview with the two GMA Network actors and they had a lot to say. Despite being still relatively young, and being that both of them are only in their late teens, the both of them have known each other for years and that has paid off for them in many ways because each time they are together on television, there is magic.

The newest episode of “Regal Studio Presents: My Boss, My Love” which is directed by Joel Ferrer (director of “Elise” starring Janine Gutierrez from Regal Entertainment, Inc. which was released in 2018) and written by Micaela Rodriguez, will be shown today at 4:35 p.m. on GMA Network. In it we will see the very popular love team of Ablan and Roeland show its magic. 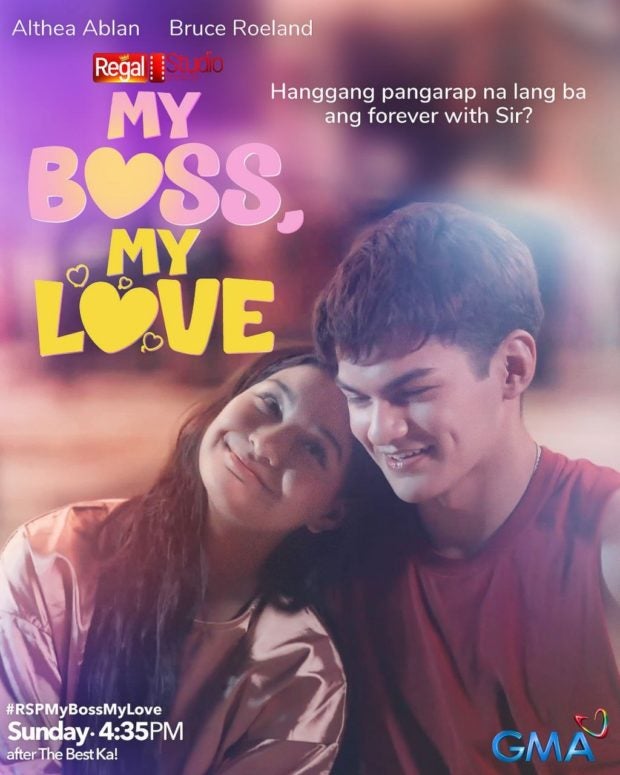 Here are their answers to my questions:

Do you remember your age when you began imagining when you wanted to join showbiz? Who inspired or encouraged you to try your luck in showbiz?

Althea Ablan: I never thought I would join showbiz. I started in commercials when I was six years old. My mom took me to some casting and there I tried to do VTR. I was able to do it. After that came along other commercials. I got used to those and found myself falling in love with that career. So, I would have to say it’s my family and myself that inspired me to join showbiz. Since then, I feel so proud of myself because I am able to manage my time between work and studies… I somehow found myself in showbiz without my planning it. But let me share how I got into showbiz. I auditioned twice when a director asked me if I wanted to be an actor. He helped me get into GMA. I was very young then; I sang and danced and all. Then, I received a text informing me I was with GMA already. Whenever I had a show, I would be so happy because it made me realize I was really in the showbiz world already.

Bruce Roeland: Just like Althea, I never thought I would find myself in showbiz. I grew up in Belgium and lived there for ten years. When we flew back to Manila, I had to learn English. I had to learn Tagalog. I tried auditions because my mom said I had the looks so she was very supportive of me. My mom inspired and encouraged me to choose this path. So, I attended workshops. Fast forward, I feel very thankful I chose this path because I fell in love with this craft. I love the world of showbiz and the supportive people around me. I feel very blessed.

What can you say are those qualities both of you have together that differentiate you the most from all the other tandems/love teams we now have in showbiz? Not only in GMA, but in all the other channels as well.

Althea Ablan: Our first on cam work as a team [with Bruce] was in “Prima Donnas.” We had a scene there where Bruce handed me a towel and asked me to help him put it on his back. Director Gina Alajar noted that we had a spark and chemistry between us. She has also mentioned the same in some interviews… So Bruce and I stand by that spark and chemistry between us. That renews and strengthens our relationship with one another.

Bruce Roeland: What differentiates us from other love teams is that Althea and I have been together as friends for more than five years now, so we know each other very well. And what we realize is that we are opposites. Althea is more on the bubbly side while I am more on the serious side. We are proof that opposites do really attract. That chemistry we have translates onscreen.

What stood out to you the most about being an actor for this episode of “Regal Studio Presents: My Boss, My Love”?

Althea Ablan: It is the same with Bruce. Because the story was made in a way that the characters in this episode are not too far off from our true personalities. My character here is one who is super bubbly. What the public may not know is that I am a bubbly person. I may appear to them as quiet and ladylike. But in reality, I am talkative and rambunctious. Bruce knows that very well. So in this episode, I am able to play myself and be more open.

Bruce Roeland: What stood out the most in this episode was that I could relate so much to this character. My character is half Belgian, half Filipino. I am exactly that in real life. I had the chance to speak Dutch and I do speak Dutch. So that is what stands out most for me here, the reliability to me of the character I played.

What was the biggest prank you played on anyone? Who do you prank on April Fool’s Day? Your family members? Your friends?

Althea Ablan: I am usually the one pranked. And when I realize I had just been pranked, I cry. It makes me wonder why they like picking on me because I am a person of simple joys. One time when we were in a restaurant, Bruce and his two friends pranked me. When I came out of the ladies’ lounge, I saw that Bruce and his friends were having a fight. It was so embarrassing and I was telling them to stop. A restaurant member told them to settle their argument outside instead, because such commotions are not allowed.

Bruce Roeland: I remember that. My accomplices were my two friends. We pretended we were having a bad argument, which was leading to a fist fight. The end result of that was it made Althea cry.

Is there a dream role you want to play one day? What genre of television series, or movie would you want it to be?

Althea Ablan: I am quite versatile. Any character, I would like to play. But what I would really like to play is a character with a disability. To play the same role over and over again is boring. People will think that’s the only one I am capable of. I would like to explore and look into different characters. And with Bruce, I want it to be action/comedy with more comedy in it. Or maybe, action/drama. Why not?

Bruce Roeland: I think I want to take on challenging roles like one who has mental problems. So that I can promote the importance of mental health and bring out problems of mental illness. I like challenging roles that will make me step out of my comfort zone. With Althea, I really want dramas. And romantic dramas where we will have fights. We are open to anything.