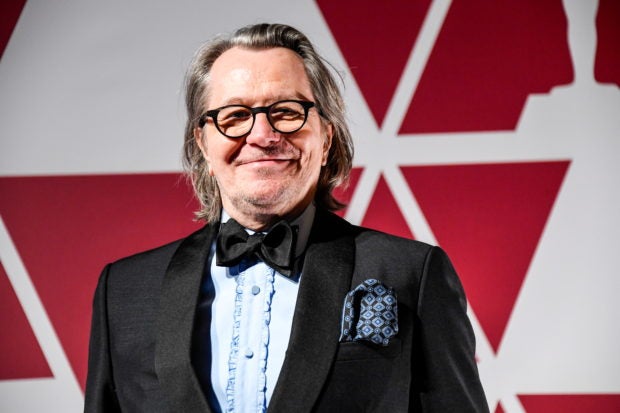 Gary Oldman arrives to the Oscars red carpet for a screening of the 93rd Academy Awards, in London, Britain, April 25, 2021. Image: Reuters/Alberto Pezzali

The show stars Oscar-winner Gary Oldman in the role of Jackson Lamb, a quick-witted but ill-mannered head of a team of intelligence officers who have been relegated to MI5’s agent graveyard “Slough House” after committing public slip-ups such as leaving classified documents on a train or sleeping with an ambassador’s wife.

Among them is River Cartwright (Jack Lowden), the grandson of a revered and now retired agent (Jonathan Pryce), who recently bungled a high-profile training exercise. Eager to redeem himself and return to the Regent’s Park headquarters, Cartwright sees his chance when a young Muslim student is kidnapped and a washed-up journalist leads him on the abductors’ tracks.

But first he must get the mission past his unkempt, flatulent boss, who seems more interested in getting drunk and insulting his staff than doing any work.

“I don’t know if I like Jackson Lamb but I certainly really love playing him,” Oldman told Reuters as he attended the series’ premiere in London.

“He is slovenly. He’s a chain smoker, alcoholic, I would imagine he probably smells a bit like an ashtray. Sticky, sweaty, greasy hair. Yeah, playing Jackson Lamb’s like easing yourself into dirty bath water.”

“I laugh. I just laugh, and we hope that we get a take where I don’t laugh,” said Lowden of acting opposite the 64-year-old.

Based on Mick Herron’s first novel in the series of “Slough House” books, the six-part show follows the failed spies carrying out monotonous daily tasks and dodging offers for after-work drinks.

“It’s a character piece set in an office … it’s not the sort of fantastical world of James Bond,” said Oldman.

“At its essence it’s a sort of office workplace drama that happens to be in the world of espionage. It’s probably as close as you get to what it’s actually like to work for the services,” added Lowden.