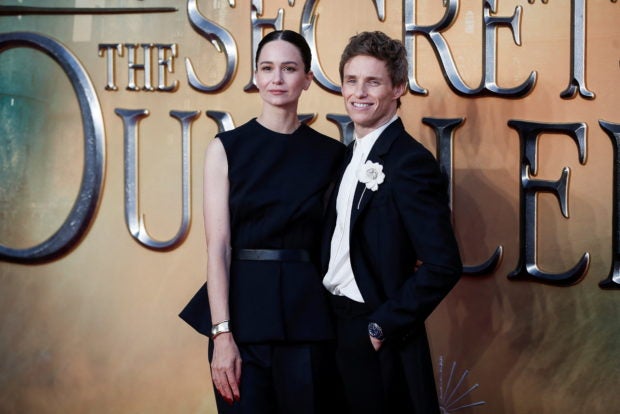 LONDON — Eddie Redmayne returns for his third outing as magizoologist Newt Scamander in “Fantastic Beasts: The Secrets of Dumbledore,” a highly-anticipated movie the Oscar winner said he feared would not be released at one point due to the COVID-19 pandemic.

At the film’s premiere in London on Tuesday night, Redmayne posed for photos and signed autographs, delighting fans of the “Harry Potter” spin-off, which is set some 60 years before J.K. Rowling’s books but features younger versions of some of the same key characters, like Hogwarts headmaster Albus Dumbledore.

“It always feels incredibly surreal but particularly euphoric this time because the making of this movie during COVID, it was incredibly stressful and hugely enjoyable,” Redmayne said on the red carpet.

“But there were moments when I wasn’t even sure it would make it out into the world and so I’m thrilled that it has. It’s filled with the whimsy and the magic that I loved in the Potter films.”

Trailers for “Fantastic Beasts: The Secrets of Dumbledore,” which is released next week, show a brewing wizard war with Scamander and Dumbledore, played by Jude Law, teaming up against villainous wizard Gellert Grindelwald.

“There are a lot of wonderfully familiar characters who evolve, reveal. There are new fantastic beasts. They’re really fantastic, some scary, some cute,” Law said.

“There’s an extraordinary heart at the center of this film. It’s a sort of broken heart and it reveals an awful lot about the empathy that Dumbledore builds on his sort of wound, his regrets and it culminates in an extraordinary battle that I think has a wonderful emotional physicality at its heart.”

Danish actor Mads Mikkelsen plays Grindelwald, taking over from Johnny Depp. The Hollywood star was forced to exit the role in late 2020 after losing a libel case in Britain against a tabloid newspaper that branded him a “wife beater.”

Mikkelsen was also at the premiere alongside co-stars Katherine Waterstone, Dan Fogler and Alison Sudol, who reprise their roles from previous “Fantastic Beasts” films, as well as Rowling, a writer and producer on the movie. JB

WATCH: First trailer of ‘Fantastic Beasts: The Secrets of Dumbledore’ out now

Read Next
Will Smith refused to leave Oscars, academy says as it weighs disciplinary action
EDITORS' PICK
House energy committee chair Arroyo bats for cheap electricity
Karding damage to infrastructure at P23M
Bongbong Marcos says PH ‘open for business’ with new Clark Airport terminal
Individuals affected by ‘Karding’ now over 157,000
Reignite your passion with the vivo Y35
Newbie gamers are in for a treat with the power-packed feature of vivo Y16
MOST READ
Angelica Panganiban ‘duguan, sugatang mom’ one week into breastfeeding
LPA enters PAR, may develop into tropical depression
Badoy not with Office of the President, NTF-Elcac, under Marcos admin — solon
Charges readied vs gov’t guard with P290-M deposits
Don't miss out on the latest news and information.