Jessica Sanchez basks in the limelight, gets mobbed in New York 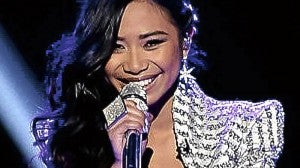 NEW YORK—It has been a whirlwind week for American Idol runner-up Jessica Sanchez.

Days after the successful finale, she has found herself performing before thousands of people at the PBS Memorial Day Concert in Washington, DC. Then, here in New York, she has been making the rounds of the various TV shows — from Live with Kelly to Good Day New York to the Today Show.

We caught up with the bubbly teen after her appearance at the Today Show, where she was interviewed by host Matt Lauer.

“It has not sunk in yet, I still can’t believe I am here,” she exclaimed, visibly excited from a high of performing a couple of songs inside the famed NBC studios of the Today Show.

Asked how American Idol has changed her life, Jessica revealed that now-classic toothy grin, and replied, “It has changed dramatically. This (pointing to the growing mob of fans) is not normal. It gave me another step to succeeding in my career, it is very exciting.”

Jessica has been mobbed everywhere she went, from the ABC studios for the Live with Kelly show to the NBC headquarters in the Rockefeller Center.

“I’m exhausted but I’m also excited to do everything. It’s the adrenaline rush every single second,” she said smiling. “I never envisioned it to be like this but I knew that I was going to be very busy and always working. I don’t regret it.”

The singer remains thankful to her loyal fans who stuck with her through thick and thin and supported her dream of becoming an American Idol. She even made a special shout out to Filipino fans across the globe.

“I love you guys! Hopefully, on tour we can stop by (the Philippines), we’ll see about that. Definitely, one day, I would really want to visit myself,” she shared.

The events today brought in fans from across the nation, ranging from San Diego locals who are in New York for a conference to visitors from Texas and Washington, DC to local, New York-based fans.

“We are staying in a hotel near the Rockefeller Center when we heard that she was on the Today Show. We’re big fans and we’re so proud of her,” said Daisy Rodriguez Patel.

During our interview, a group of fans screamed ‘We love you, Jessica!’ and she nodded with a big smile.

“She is so sweet. She’s my crush!” said Inno Espiritu, a Filipino tourist visiting the Big Apple.

While waiting for Jessica to come out for the interview, Michael Orland, pianist, arranger and associate musical director of American Idol, was spotted. He has nothing but high praise for the teen singing phenom.

“She is a star. She’s very talented. She opens her mouth and she’s perfection. Jessica is such a joy to work with, she has such a strong work ethic,” Orland said. “There’s nobody in the market today that does what she does. She’s going to be huge because of her insane talent.”

As for the now infamous finale song, which many believe caused the singer’s defeat, Orland had this to say.

“If you listen to the whole recording of the song, you can hear the part specially in the second verse where there was an urban sound to it. We were under time constraint in the finale and we can only do a two-minute version of it, which had the feel of a vanilla pop ballad,” Orland said.

As to what kind of songs Jessica needs to record, Orland is very hopeful and optimistic that there are bigger things in store for the singer.

“She’s gonna do way bigger and better songs,” he said.

Some of Jessica’s fans may still be bitter about the loss, but many of them have moved on.

“I still think she should have won, but she made it so far and I know she’ll go even farther throughout the years. And knowing that makes me smile and be even happier. She’s happy and proud of where she is now, even after being runner up. I guess, I’ve moved on,” said Tara Talaue, from the Bronx. Tara was one of the first people in line to watch her perform on The Today Show.

“Jessica has a very bright future ahead of her. Besides, we all know that being runner-up on American Idol doesn’t necessarily put you in the backseat. Many of the past finalists who didn’t win are now successful and some have really made a name for themselves greater than that of past winners,” Talaue added.