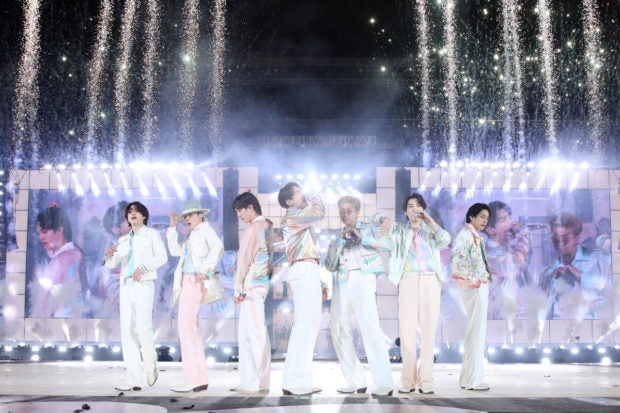 SEOUL — Masks on at all times, no shouting, no jumping, only clapping — never before had there been a K-pop concert with such rules, but even with these regulations in place, BTS’ Seoul concert on Thursday rocked Jamsil Olympic Stadium louder than ever.

The band on Thursday kicked off the BTS Permission To Dance On Stage – Seoul concert series at the sports complex in southern Seoul, the same venue they had last held a domestic in-person concert in October 2019. Olympic Stadium was where the septet also performed without an audience for a concert that was broadcast in October last year. 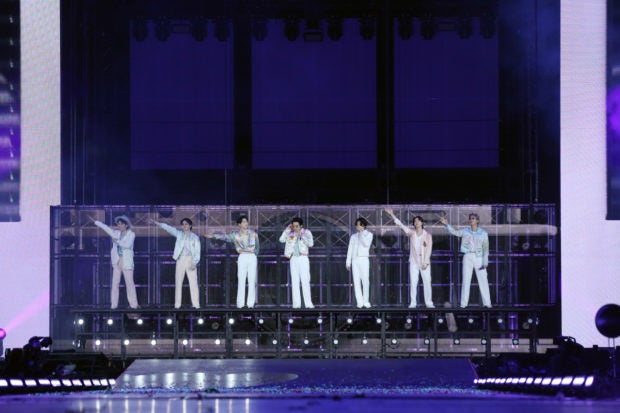 Opening the night with “On,” a song the band has long-awaited to showcase live in front of Korean fans, and dressed in red and white, the band went on to perform timeless hits “Fire” and “Dope.” During “Dope,” the bandmates also played with a camera on the stage that streamed live to the massive LED screens behind them, as well as to the screens of fans watching online.

“We’re finally here together at Olympic Stadium. We came here five months and performed in front of cameras, but just having you guys in the seats seems to make everything feel different,” RM said. “When will we ever do a concert with only claps allowed? This show will go down in history.”

“It’s a shame shouts are banned, but what’s more important is that we are finally here together in the same space,” Suga said. Jungkook added, “I’m really going to pour my everything out today so that I have no regrets. Please enjoy the moment with us!” 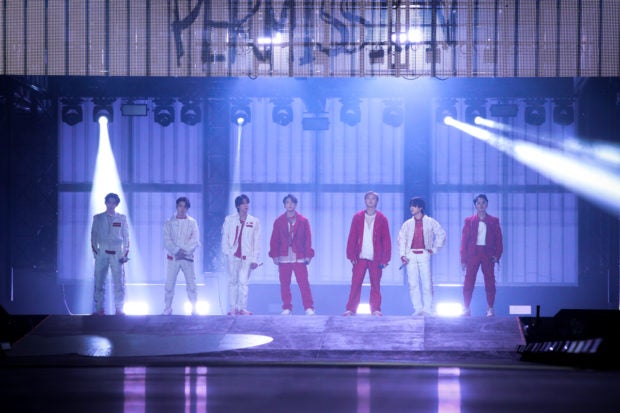 V, who had to stay seated during the October concert due to a leg injury, shouted, “I had to stay seated in the last concert here and I’d felt so outraged that I had said then that I will be back with steel legs next time! How do my legs look guys?”

As the band had announced ahead of the show, the night was made up only of performances where all seven could participate, including “DNA,” “Blue & Grey,” “Blood, Sweat and Tears,” “Fake Love,” “Boy With Luv” and “Black Swan,” the last of which the septet had waited long to show live on stage.

After performing “Life Goes On,” a song that held a special place in the hearts of many “Army,” the band’s official fandom, as the global pandemic still persists, J-Hope, his eyes glistening, said, “It’s touching that we actually sang ‘Life Goes On’ in front of Armys at the Olympic Stadium.”

Performed them for the first time live in front of Korean fans, the act’s record-setting hits “Dynamite” and “Butter” shared the climax of the festivities, as the band danced to the vibrant, disco-pop tunes. B-side tracks included “Telepathy,” “Dis-ease” and “Stay,” from their fifth LP, “Be.”

Unable to hear fans’ voices, the band tried harder to catch fans’ emotions through their masked expressions, and what moves they could make while sitting down.

“I was really worried that you guys couldn’t make noise, but I saw some people hitting their laps like this (with the clappers) real hard, and that just made all the worry go away,” Jimin said, acting hitting his legs and laughing. 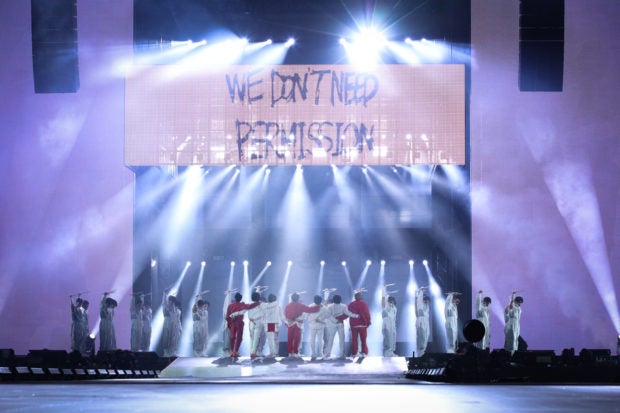 The 70,000-capacity venue was far less than half empty, with attendees limited to 15,000 due to social distancing restrictions, but the bandmates seemed to be having more fun than ever. During the talk sessions, they spoke with each other and fans comfortably, throwing jokes around and teasing each other.

“It felt really weird earlier during the sound rehearsal. I felt that I was finally back home,” Jimin said. “It feels like we’re seeing an old friend after a long time.“

Songs from their earlier days, “Wings,” “So What,” “Idol,” “Airplane,” “Home” and “Bapsae” were a blast from the past for the band and fans alike. For “Wings,” the bandmates were able to come up closer to the fans as they performed on a two-story moving stage that was pushed around the stadium ground by staff.

As a special event for fans who had to sit in silence, they were invited to join in for “Mikrokosmos” by clapping along to directions given on the big screen.

Jungkook said: “It’s a concert after two years and five months that felt like 23 years. I’ve thought hard about what I should say today, but I won’t make it long. I’ve missed you very much, and I’m just so happy right now. Although we can’t see your faces or hear your voices, we hope you’ve had a great time with us.”

“We prepared a lot for this concert. The members, we discussed a lot about whether we should change the whole cue sheet that we’d used in the US. But as most Korean Armys have not seen it yet, we decided we shouldn’t make big changes. Did you guys enjoy it?” Jin posed. The band previously held the tour in Los Angeles in November and December ahead of the Seoul concerts.

J-Hope, the bubbliest of the group, stared into the audience with glistening eyes. 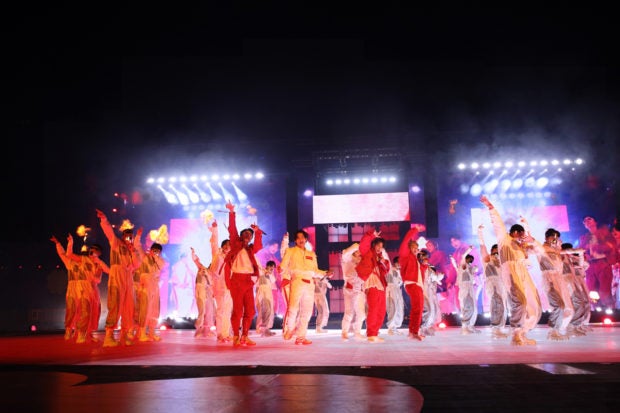 “How have you been, guys? To be honest, I don’t think I’ve been so well in the past two years. We had to wait indefinitely for the end of the pandemic, and all I could do was miss you guys. I realized this today. Although we’ve done so many things to continue the show without an audience, it became clear to me today that a concert becomes whole when the artist and audience come together in one place,” J-Hope said. “Thank you for coming today and ridding me of all the worries. I can’t express with words how grateful I am. I will try harder in the next concerts with this energy I got today. This first day means so much to me.”

“We are done with the damn ‘untact’ (contactless concerts)! We really didn’t know when we had it all. The physical interaction, the exchange of energy, the noise, the jumps — what all this meant. We really ground everything into this concert, and although I can’t say I wasn’t discouraged at all (by all the restrictions), after all it was much better than a virtual concert,” RM said. “Singing ‘Home’ earlier was really significant. This is our real home. We’re really happy to be back home. All this will be just a good memory, a moment that I would tell my future children that we even had this kind of concert a long time ago. Thank you for making this historic show.”

Ahead of the night’s finale of “Permission to Dance,” RM shouted, “Until we can see each other on better terms, when we can jump up and shout out loud, until we can keep that promise, I hope this song fills you with energy. Guys, this song is completed by you wherever you are.”