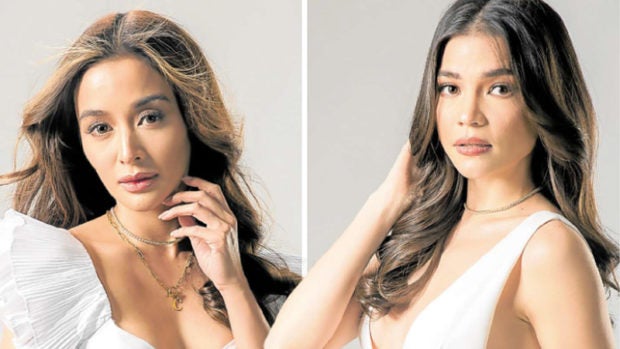 Because of the pandemic, Rhian Ramos has gotten used to limiting physical contact with other people in real life, so much so that she had to unlearn the habit while shooting television shows before the pandemic.

“Sometimes, what we do on the set is part of our daily habits. But we try to erase those for the characters we play, because they live in a different world or reality. Like right now, we rarely even shake hands. But in the show, there’s no pandemic. So sometimes you hesitate before you hug someone, things like that,” she said in a recent virtual conference for the GMA 7 soap “Artikulo 247.”

But because of the safety protocols and systems in place in their taping bubble, Rhian was able to ease up and became comfortable enough to shoot intimate scenes. “We were tested and we underwent a 10-day hotel quarantine. Before and after kissing scenes, we even had antiseptic gargles and things like that,” she said, laughing. “So all those things helped us… We trusted the system.”

“The choice was still ours,” she stressed. Besides, the intimate scenes weren’t gratuitous, because the afternoon legal drama series is premised on the controversial Article 247 of The Revised Penal Code, which states that a married person who catches his spouse having sexual intercourse with another person may be exempt from punishment, should he or she inflict physical harm on them.

“The scenes weren’t there because trip lang or for the sake of being sexy,” Rhian pointed out. “They were crucial because they will start the domino effect in the plot.”

Rhian’s fellow lead star, Kris Bernal, on the other hand, joked that her inhibitions had nothing to do with the pandemic but more about the fact that she had just gotten married to businessman Perry Choi.

“You know, I was keeping count, and I think I have kissed my coactors (Mark Herras, Jome Silayan and Mike Tan) more than I have kissed my husband, because of the locked-in setup,” she said, laughing. “Lahat sila hinalikan ko. My goodness!

But seriously, she said, her husband understands the nature of her work. “He doesn’t meddle with what I do on set. If you have to do this or that, then go for it. And he sends me things I need while taping. I’m very spoiled,” she said.

“I just follow what the director says and what the script requires. And if the production approves the scenes, I do it. Mabilis akong kausap. The production made sure we were safe and our coworkers were responsible,” Kris added.

In “Artikulo 247,” which airs weekday afternoons starting March 7, Rhian plays Jane Ortega, a career woman who has an affair with her boss, Alfred (Jome), who’s married to Klaire Almazan (Kris). One night, Klaire catches the two in bed and, in blind rage, kills her husband.

Klaire is penalized with destierro or banishment as Article 247 prescribes. Years later, she returns and assumes the identity Carmen Villarama. Fueled by vengeance, she sets out to torment Jane, who’s trying to start anew and pick-up the pieces with Noah Borromeo (Benjamin Alves). Noah’s brother, Elijah Borromeo (Mark), on the other hand, ends up falling in love with Carmen.

“The Article 247 is the jump-off point of the series. We see how the law, and its loopholes, work for the aggrieved and the suspect,” director Jorron Lee Monroy said. “And then we explore what happens to the lives of the people involved in the case. The case was resolved in court, but how does it affect the people after? That’s where the drama starts.”

The material is heavy and challenging, Rhian said, but she’s always up for any challenge. “It was very difficult… But I’m not afraid of challenges, because that’s how you learn more,” she said. “Any feeling or emotion required by the script is always fun to get into or achieve, whether it’s a negative emotion or not.”

“As an actor, you’re not doing it alone. Even if it’s a solo scene, you have the director and the production with you,” she added. “It was a very enjoyable experience.”

While she has done dual roles in the past, like in “Impostora,” Kris has never done full-blown contravida until now. She feels that “Artikulo 247” put her acting skills to test.

“It’s difficult because you have to portray a wider range of emotions. There were emotions I had never tapped before, because I’m used to being the goody-goody character, ‘yung inaapi. This is all new to me, so my acting was tested. I had to explore my acting,” she related. “But because my coactors were all good, I was able to dig deep for the emotions being asked of me.”

“For a while, I thought I would be stuck doing sweet or cute roles. But now I know I can do contravida roles, and I’m open to trying other types of characters in the future,” she added. INQ