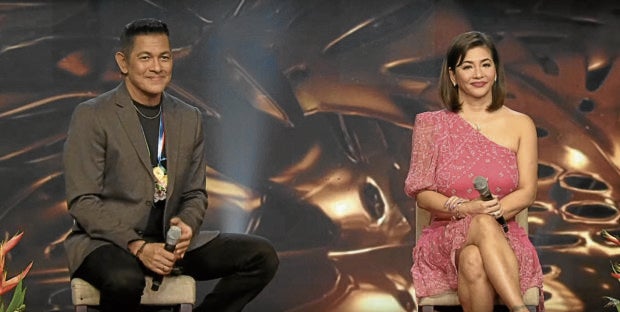 We’re meant to share our experiences. We don’t want these to die with us,” said singer-actress Regine Velasquez when asked about her views on mentoring the younger generation of local performers.

The event also coincided with the celebration of the 30th anniversary of Star Magic, ABS-CBN’s talent management arm.

“What’s the point of learning all these things if we’re not able to share with other people and enable them to learn. We were once like them. We’ve also gone through mentoring. It’s wonderful that the young ones are also willing to listen to us,” said Regine, dubbed “Asia’s Songbird.”

“These kids, they come to us because they’re interested to listen to our story, to what we’ve experienced during our time, although things back then were very different,” added Gary, who joined Regine in a virtual Q&A session after signing his contract. “We did something right in the past that explained why we’re still part of the industry up to now. This has a lot to do with the heart.”

As an example, Gary recalled how he would mentor “The Voice Philippines” alumnus Darren Espanto. “He is very popular now but he still goes to me for tips, no longer to become more popular but to prolong his career. These are the things where I know I can help,” Gary pointed out. “The younger ones, especially those who go up on the ‘ASAP Natin ’To’ stage with us, deserve so much more. They need to up their game, especially since they’re now seen everywhere and the stage is now as big as their phones. You might as well perform your best because you’re reaching more people than ever before.”

When asked to share what’s in store for her in the coming months as a Kapamilya, Regine said: “I hope to work with Gary in a concert again, or even with Lea (Salonga)—we’ve never done this live before and that would be amazing. I’ve already been receiving requests from supporters to do this, but I think only ABS-CBN can mount something like this. It’s good that we’re slowly being allowed to come out and gather. I’ll be having a concert with Mega (Sharon Cuneta) in June. It’s a dream come true for me because Sharon is one of my idols.”

She added: “I’ve only been a Kapamilya for four years. Marami pa akong ibibirit. I’m excited for that. The possibilities are endless. With the short time I’ve been here, I already go to work with a lot of people I admire like Vice Ganda, Sarah (Geronimo) and Ate Sharon.”

She is currently a guest cohost in the morning magazine show “Magandang Buhay.” “This is only until Karla (Estrada) comes back. I’m having such a wonderful time working with (cohosts) Jolina (Magdangal) and Melai (Cantiveros). We would laugh so much together that it doesn’t feel like work for me. I’m happy to have been given the opportunity to do a morning show again. I kind of missed it,” she said.

As for Gary, he said he has come to a point in his career when he is already thinking of “what I can leave behind, my legacy. Many of the things I will be doing will pertain to that.”

Gary then cited some of his advocacies. He is the ambassador of the app pray.com. “This is a good thing because Filipinos are very prayerful. There will be new content coming out very soon. I will tell the story of Joseph and his brothers. I’m playing all their voices,” he beamed. “I also have an ongoing advocacy wherein I meet students of different universities online. I share my life with them and sing some songs.”

He added: I still will be going on tour. I think my body can still take a few more years. I can still perform especially for people in the Middle East, where I’ve been getting so much support throughout the years. I will continue to go out there. Of course, I’ll be working on a major concert here in the Philippines, when we’re finally allowed to do face-to-face. You’ll know more about that in time.”

He further said: “At this point in my career, I’m now willing to do new things, like collaborating with other artists to create more songs. I came up with one last year. I’d be thrilled to do more, especially if it’s for a good cause.”

To budding songwriters, Gary said: “Not all singers are able to write songs, so I highly encourage you to just keep on writing. Your dream to come up with a song may not come to pass in a year, but it might happen later with an artist you never expected. It could be that the singer hears it in passing and finds that he likes it, and then it eventually becomes what it’s meant to be. Do not be discouraged. If you feel that you’re going nowhere, just keep writing. There’s a time, place and reason for everything that you do.”