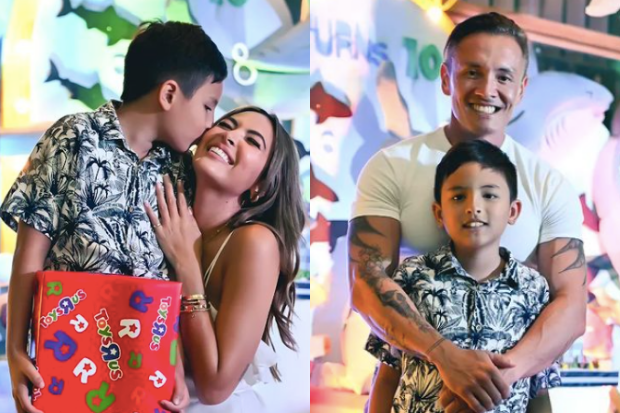 The Binibining Pilipinas World 2007 was shown attending the party on the Instagram page of Rio Jones Photography last Saturday, Feb. 26.

She can be seen receiving a kiss from Connor as they pose in front of an under the sea-themed backdrop, while a separate photo shows Consunji hugging their son in front of the same backdrop.

Wilson greeted Connor on his birthday by showing throwback photos and recent snaps of her son on her Instagram page yesterday, Feb. 28.

“I can’t believe you are now 10 years old. Where has the time gone? My pregnancy and journey to have you was not an easy one but it was all worth it,” she said.

Wilson expressed how proud she is of the “beautiful young man” that Connor has become and described him as “kind, gentle and extremely loving.”

“I cherish every hug, every kiss and all of our tender moments of lambing (affection). I love so much my Connor. Happy birthday bubba!” she added.

Wilson announced her split from Consunji in a statement in September 2021, stressing that there was “no animosity” between them.

The beauty queen later on lamented being “refused” time to spend with her son last Christmas despite a prior arrangement, though she eventually got to celebrate and open gifts with him on the day after the holiday.

Last month, the mother and son went on a safari adventure in Pampanga where they got to interact with a python, a baby tiger and various birds, among others.  /ra

Maggie Wilson frustrated over being ‘denied’ spending Christmas with son