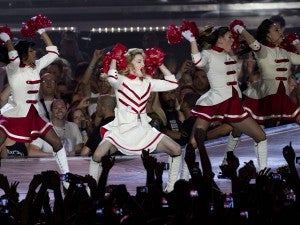 U.S pop icon Madonna performs at the Ramat Gan stadium near Tel Aviv, Israel,Thursday, May 31, 2012. Pop music star Madonna is kicking off her new world tour in front of tens of thousands of ecstatic fans in Israel. AP PHOTO/ARIEL SCHALIT

ABU DHABI – US pop icon Madonna hit the stage running at Abu Dhabi’s Yas Island stadium on Sunday in her first ever concert in the Gulf, days after launching a world tour in Israel.

An estimated 25,000 fans cheered and screamed as the Material Girl finally appeared on stage

Sunday’s concert was the first of two Abu Dhabi performances. The second, announced after tickets for Sunday’s event sold out in hours, will be on Monday.

Brandishing an assault rifle during her hit Revolver, the superstar saluted the emirate of Abu Dhabi, the second stop in her MDNA world tour.

Madonna began her much anticipated tour in Tel Aviv last week, calling from the stage for Middle East peace.

“As you know, the Middle East and all the conflict that occurs here and have been occurring for thousands of years, they have to stop,” she said. “You can’t be a fan of mine and not want peace in the world.”

“So start today – every single one of you, if there is peace here in the Middle East, there can be peace in the whole world.”

“I wish I had the freedom to go there and see her. But I can’t because I am Palestinian and there is an occupation,” said Omar who comes from Ramallah in the West Bank.

Others appeared not bothered that she had performed in Israel, considered by most Arabs to be an arch-enemy.

“We are a peaceful people,” said Lebanese Patricia Chebli, 37.

“Culture is for everybody, so I don’t mind” that she went to Tel Aviv.

The tour – Madonna’s first since her wildly successful “Sticky and Sweet” outing in 2008 and 2009 – will move on to Europe and the Americas, with concerts planned in a total of 80 countries.

It is expected to end in early 2013 in Australia.