What Maris Racal and Rico Blanco love about each other, and what keeps their relationship strong | Inquirer Entertainment

What Maris Racal and Rico Blanco love about each other, and what keeps their relationship strong 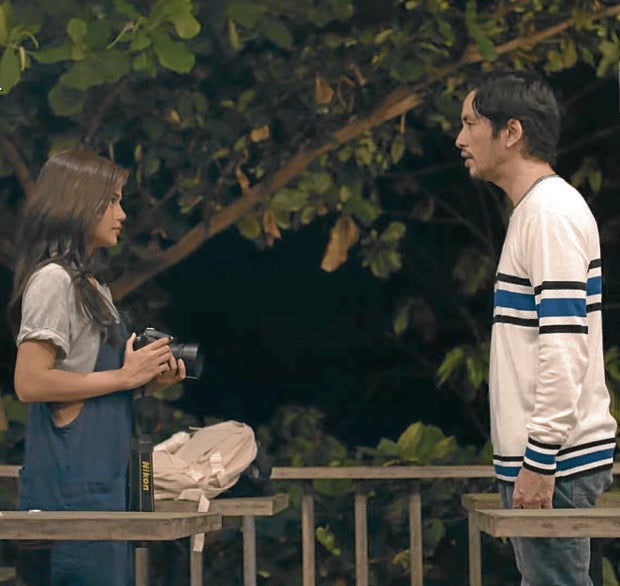 Falling in love didn’t happen right away for singer-actors Maris Racal and Rico Blanco, who first met in 2019 to collaborate on the former’s song “Abot Langit.”

On Wednesday, Maris and Rico faced show biz media—albeit only virtually—for the first time, while promoting their episode, titled “The Bitter Hopia,” on the digital series “The Goodbye Girl.”

Maris swore that the “kilig” she felt when she first met Rico at the latter’s recording studio was “because Rico is one of my OPM idols. That’s it, nothing more. I was excited to have been given the chance to collaborate with him,” she declared.

Rico agreed and added that love only blossomed when he and Maris started talking after the recording. “It happened little by little. Definitely, it happened not during the first time I met her, not when we were working on the song. I take pride in my professionalism in the studio. No matter how I think the person I’m working with is attractive, I prioritize my art and take it seriously. It began some time after we were done, when we started asking how each other was doing,” Rico told reporters.

When asked to describe the kind of girlfriend Maris is, Rico answered: “This doesn’t mean I’m putting down my past girlfriends. Each individual has good and unique traits. Maris doesn’t even realize this, but she gives out a happy vibe. This is something normal to her and her siblings. I know this because I hang out with the sisters and even Maris’ mom. It’s the same vibe when you’re hanging out with your friends. Of course, there were days when we also felt down but, generally, she gives out a vibe that’s so positive. She brings out the best in me. I would sometimes forget that I also have a playful side, that there’s a bit of childlike fun in me. She brings that out.”

As for Maris, she admits to feeling “safe and secure” when she’s with Rico. “When I’m dealing with any kind of problem or I’m overthinking again, I’d tell this to Rico and he would always come up with a logical explanation as to why I was feeling this way. I want to always have someone like him in my life,” she said.

Maris then confessed that it took them longer to publicly admit they’re a couple because she first had to “feel comfortable” with the idea. “We kept it a secret for a while because I wasn’t ready yet. When I was already comfortable, I uploaded some of our photos on Instagram, not realizing that I had to attend a series of press conferences to promote my episode for ‘Maalaala Mo Kaya.’ This was after the long pandemic break. I had already forgotten that people would force me to make a definite answer,” she recalled.

“When I was asked for the first time about the relationship, I got really nervous. As much as I wanted to keep things private, I also understood that we’re both show biz personalities,” Maris said.

Asked to share what is keeping their relationship strong, Rico said: “I realized one thing about being with Maris. All these years, I thought that in order to maintain a relationship, one had to put in a certain level of hard work. I’ve been in relationships that lasted because hard work was exerted by both sides. But for us, we’re surprised that while it does take work, it need not have to be hard. This is why I don’t know how to answer the question.”

Rico further said: “I guess it’s about being honest to your potential partner and to yourself. Before I met Maris, I already knew who I was. My previous relationships didn’t last because I still didn’t know myself then. I was willing to ignore the aspects where my partner and I didn’t match. I was willing to sweep them under the rug.

“Maris changed my beliefs in love in a lot of ways. When we were new in the relationship, I was nervous because we didn’t quarrel. I said, ‘Hala! Kailan kaya?’ Then she said, ‘Why are you expecting us to fight?’ We’re still at the start of this journey. We still have a lot of areas to improve on. We want to be able to enjoy that.”

Rico said being with Maris also changed his perspective as an artist. “Before, I wanted people to focus on my work. I didn’t want to talk about anything else. Now, I’m a little more mature. I already know how the industry works. Back then, I was just a guy in a band who couldn’t see the bigger picture. I was protective of our art, our image … all of that,” he recalled.

“With maturity also comes the fact that I’m already at peace with what I’ve achieved all these years. I’m no longer afraid to put myself out there for who I am. Maris really has this unique vibe. She engages people on social media. She’s not afraid to make fun of herself. This is kind of my language now, too … mas masungit lang ako ng kaunti.”

Working with Rico in the series allowed Maris to get to know him more. “During taping, I discovered how Rico can be so chill, while I’m so nervous and rattled. I memorized everything. I was super organized. I knew all the scenes I was supposed to shoot. If things didn’t happen the way I had planned, I easily get stressed,” she said. “Rico is so chill, even when plans change. I thought, ‘Oh my God! He’s awesome to work with.’ I look at him and I become a lot more calm.”

Years from now, Rico said he hoped his relationship with Maris would “become deeper and richer with so much more memories in relation to music and acting.” He pointed out: “It seems like we’re gonna take everyone on this journey with us. I’ve already come to terms with that. Of course, there are things that will be kept private, but I’m hoping we will be able to share with people more fun stories in the future.”

Maris agreed by saying: “I look forward to sharing many firsts with Rico. We have a lot of plans that were put on hold because of the pandemic. Also, we don’t get to travel as much. I look forward to that, too; to create new memories with him. I’m sure the future will be a lot more fun.”

Based on the book by bestselling author Noreen Capili, “The Goodbye Girl” illustrates the five types of heartbroken women. Maris plays Ria, “The Bitter Hopia.” She seems to be getting mixed signals in her relationship with band member Caio (Rico). Everything about them is casual … the sex, the friendship, the connection … but she keeps hoping for more, until she comes up with the idea that Caio isn’t just capable of giving the love she is hoping for.

Directed by Derick Cabrido, “The Goodbye Girl” streams on Feb. 14, with a new episode dropping daily on the iWantTFC app and website (iwanttfc.com). It is produced by Dreamscape Entertainment and Clever Minds Inc. INQ