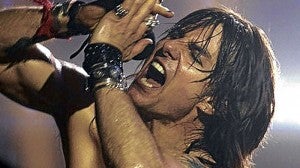 CRUISE. Out to prove his versatility.

IN the film biz, even the biggest stars are only as good as their last performance—so, they cogitate carefully and long about the movie offers they choose to accept, for fear that a wrong decision can help cause their high-flying careers to self-destruct.

This season, for instance, Tom Cruise is bent on surprising and even shocking his fans into startled and hopefully rapt attention with his unconventional rock-icon characterization and musical performance in the film version of the stage hit, “Rock of Ages.”

Cruise is at the top of his game in the action-thriller department, so he really didn’t have to go this far out to prove his versatility. But the actor isn’t getting any younger, so we understand his need to make headlines in the biz with his “psychedelic” portrayal.

In addition, the film stars inveterate scene-stealers like Russell Brand, Paul Giamatti, Catherine Zeta-Jones, Alec Baldwin and R&B queen, Mary J. Blige, so Cruise had to do something really different to avoid being upstaged by the crafty competition!

Having placed all of his golden eggs in this brassy, bitchy basket, will Cruise pass muster—or, will he end up looking like an omelet on suicide mode? All too soon this month, we’ll get the answer to that quivering question!

For his part, after the critical triumph that was his Hoover characterization in “J. Edgar,” Leonardo DiCaprio is playing another attention-calling role—Jay Gatsby, in Baz Luhrmann’s filmization of F. Scott Fitzgerald’s novel, “The Great Gatsby.”

Gatsby is a mysterious, party-giving millionaire who draws would-be writer, Nick Carraway (Tobey Maguire), into the captivating world of the super-rich in the high-flying ’20s, prompting the young writer to pen “a tale of impossible love, incorruptible dreams and high-octane tragedy—and holds a mirror up to our own modern times and struggles.” —Do tell!

Don’t hold your breath waiting for the film to play in town any time soon, however. It starts its run early next year.

Affleck has a lot riding on this movie, because his career hasn’t exactly been going great of late, so we hope that it will turn the tide for him. Making the film an even more daunting challenge for Affleck is the fact that he also directs it. Other key parts are being played by Alan Arkin and John Goodman.

John Cusack goes for broke with his new film, “The Raven,” a thriller-chiller in which he portrays no less than sinister novelist, Edgar Allan Poe.

Plot: “When a madman begins committing horrific murders inspired by Poe’s darkest works, a young detective (Luke Evans) joins forces with the author to get inside the killer’s mind, in order to stop him from making each  of Poe’s brutal stories a chilling reality.” —Brrr!

Aside from revitalizing his flagging career, Cusack hopes that “The Raven” will remind viewers of Poe’s great gift as a writer: “He invented the detective genre, he was the godfather of goth, he wrote satire, and he also did burlesque! The movie gets to show all of his sides,” Cusack says, with an appropriately sinister smile.