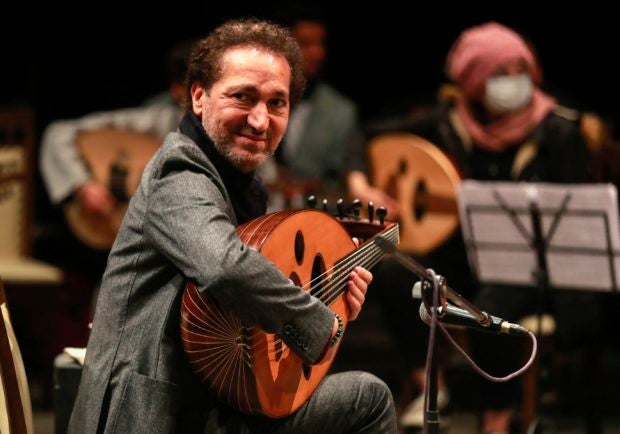 Long uprooted from his native Iraq, Naseer Shamma, an icon of the Arabic oud, has returned home to help rekindle the flame of Iraqi music, snuffed out by decades of conflict.

“When you are in your own country, you feel very high emotions with the audience,” the master string player said in an interview with AFP.

At nearly 60, the virtuoso who studied under late Iraqi oud legend Munir Bashir still appears in awe of his instrument, as well as those that accompany it.

“All those instruments are Iraqi, you have the santur for example. Each one is from 2000 BC,” he said at the national theatre orchestra packed with Iraqi instruments. “They are very historic instruments and the sound is a very special sound.”

Speaking between rehearsals, he added, “There is nostalgia here, with friends. I studied in Baghdad for six years and I always feel more comfortable when I play here.”

But such nights in Baghdad have become more of an exception than the rule for Shamma, a native of Kut, in the country’s southeast.

Exiled in 1993 under dictator Saddam Hussein, he only returned to Iraq for the first time in 2012.

In the interim, he spent time in Cairo, as well as launching schools of Arabic oud across the Middle East, before settling in Berlin, where he lives now.

Aside from his musical mission, his latest Baghdad performances come with another purpose.

As UNICEF has pointed out, “decades of conflict and under-investment in Iraq have destroyed what used to be the best education system in the region and severely curtailed Iraqi children’s access to quality learning”.

From the Iran-Iraq war of the 1980s to the subsequent international embargoes, the 2003 United States-led invasion and the later Islamic State group takeover, Iraq has struggled to emerge from bloody turmoil.

“And of course, three or four generations paid the price of this,” Shamma said.

Despite the sluggish pace of Iraq’s recovery and the political disputes that always threaten to erupt into new violence, the musician is hopeful for change.

“We hope that music… will change the soul of people,” he said.

While Iraq is still far from its cultural heyday of the 1970s and 1980s, it has recently seen a fledgling renaissance, with art galleries opening and book fairs and festivals being held.

“We need to close the bad past and start again a new life with a new memory and a new vision for the future,” Shamma said. JB