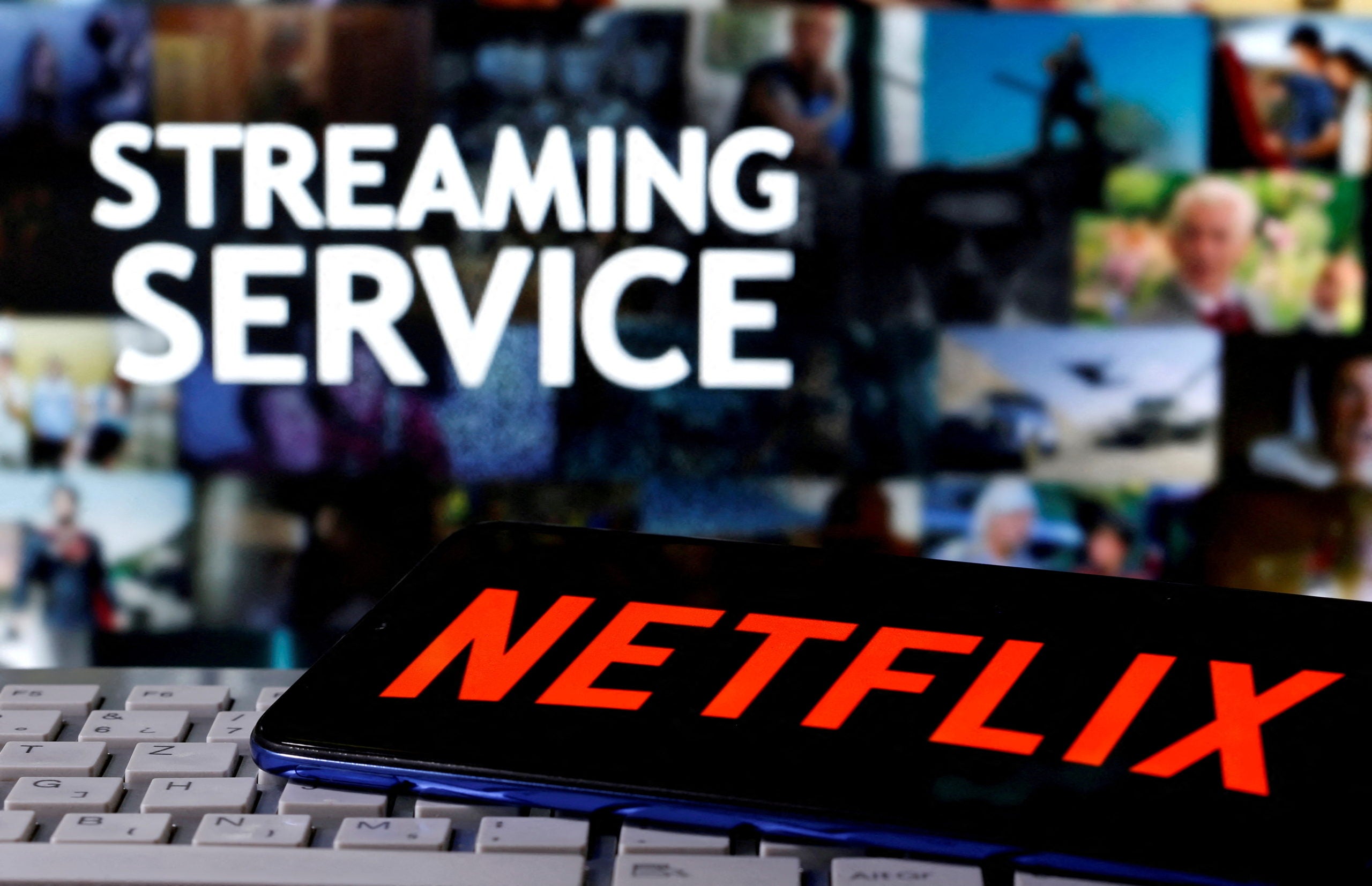 A smartphone with the Netflix logo is seen on a keyboard in front of displayed “Streaming service” words in this illustration taken March 24, 2020. (REUTERS/ File Photo)

The streaming service ended the year with 221.8 million subscribers, just below target, after booming during coronavirus lockdowns that kept people at home and on the platform.

Things are not looking better for the first quarter of 2022, with the Netflix earnings report saying the firm expected to only add some 2.5 million subscribers.

The market punishment was immediate, with shares of the California streaming giant losing some 20 percent in after-hours trading.

The last first-quarter expectation under 2.5 million subscribers came in 2010, when Netflix had a mere 13.9 million customers.

“While retention and engagement remain healthy, acquisition growth has not yet re-accelerated to pre-Covid levels,” Netflix reported.

“We think this may be due to several factors including the ongoing Covid overhang and macro-economic hardship in several parts of the world,” it added.

Most of the 8.3 million subscriptions added at the end of last year came from outside North America, according to the streaming service.

Netflix argued that it was holding its own against fierce streaming competition from the likes of HBO Max and Disney+, saying it “may be affecting our marginal growth some.”

But analysts from Parrot Analytics see a significant bite from Netflix’s business.

“Apple TV+, Disney+, and HBO Max account for virtually all of Netflix’s losses in global demand share for original content over the last two years,” they said.

“The world’s leading streamer faces more intense competition than ever heading in 2022,” they added.

Analyst Rob Enderle said the markets are already a bit jittery at the moment with concerns over inflation and geopolitical tensions with China and Russia — and competition is fierce.

“Netflix will increasingly find it hard to stand out and attract subscribers; even the major television networks have their own services now,” he noted.

“When people are having trouble affording gas and groceries, it is going to be hard for them to justify another streaming service,” Enderle added.

The platform benefited from the global success of the South Korean series “Squid Game,” which had been seen by more than 142 million subscribers (about two-thirds of users) by mid-October, one month after its release.

Netflix confirmed a second season was coming, but did not give exact timing.

Fans meanwhile will have to wait until March for large-scale releases such as season 2 of the wildly popular “Bridgerton.”

Facebook recently announced subscription price bumps in the United States, with the basic option now costing $9.99, and the most expensive going up to $19.99.

Meanwhile, Netflix’s costs continued to rise as it spends on shows and marketing to fend off competition.

“Film is incredibly important for our members, which is why our ambition has always been to work with the world’s best filmmakers and stars to create a wide variety of quality movies,” Netflix said in the letter.

The pandemic stalled production of shows for a while, but Netflix has ramped back up its output of original programming, boasting hits such as “Squid Game,” “Red Notice” and “Money Heist.”

The company reported a net income of $607 million in the fourth quarter on revenue that grew to $7.7 billion.