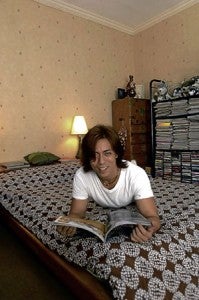 “I STARTED out as a model so I’m used to wearing anything,” says Lance, who has created an alter ego, James Wolf, for his comeback as a singer.

Lance Raymundo chants this mantra when hunting for costumes and accessories for his badass alter ego, James Wolf. “I’m not vain [but] when you’re maintaining a certain look, you have to make sacrifices,” he tells Living Stars.

“I trust the people who handle my career. My manager (Mark Shandii Bacolod) and my stylists really work for the best of their artists. We’ve successfully invented James Wolf,” says Lance. “I have a Twitter following that’s growing every day. People call me Wolf now. This means they’ve accepted him.”

Lance recently created the “Wolf sound” which, he says, means “wonders of living and freedom.” He is working on a 10-track CD scheduled for release later this year. “Fatanas,” the carrier single, caused a stir when its video was uploaded on YouTube last year.

The real Lance says he prefers the “basic stuff.” He explains: “I don’t wear feathers in real life. When I go out, I wear tees and sneakers. Boots aren’t comfortable.” However, he said, adjusting to the new look wasn’t difficult.

“I started out as a model so I’m used to wearing anything. My stylists didn’t have a hard time; I didn’t resist them. It’s part of the fun. I sometimes get cut and bruised from wearing all those accessories.”

Lance started singing at a very young age. He recalls: “That’s when I hit the high point. Then I stopped and went to school and lived a normal life. Years later … I discovered that people were still open to having me back. That was heartwarming. They’re welcoming me with open arms, with their tweets, gifts and presence in my shows.” 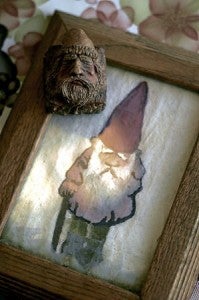 HE CONSIDERS this gnome a lucky charm.

“I have normal-looking vests that I wear everywhere, even to the mall. I also have vests that are avant garde. They have feathers, and you’ll never see me wear them again. They were designed for the ‘Fatanas’ music video,” says Lance. “In the beginning, my manager and I just wanted to make a video that’s funny and, at the same time, meaningful. ‘Fatanas’ is a combination of the words ‘fat’ and ‘Satanas.’ It’s a song against greed and corruption. We used the feathers to show we’re not greedy, that we have that angelic quality.”

“This is the first jacket that my stylist provided when I performed as James Wolf,” he says, showing a leather piece with fur collar. “I was very hesitant to use it at first. I’m a guy; I don’t wear fur. But I’m an artist and I’m projecting a certain image. I also like wearing shirts that have pictures of my idols, like David Bowie.”

SOME of the feathers he used for the “Fatanas” video

“This suit was made for me by Alcs Porras, with further styling by Anna Araneta … In front, it’s very sleek and elegant,” says Lance. “At the back, it has angel wings. It screams, ‘I’m a rock star!’”

“For formal outfits, the most important consideration is the cut,” he points out. “You can’t wear anything too loose.”

“I follow trends; I’m not afraid to wear short shorts. I actually feel comfortable in them. Some are from Topman, some were made for me by Alcs and Anna,” Lance says.

LANCE transforms into James Wolf for his stage act.

He prefers slim-cut pants to loose pants. “Surprisingly, I’m comfortable wearing them,” he says. “When I go out with friends, I like wearing this (a pair of ripped vintage denims). I wear colored and more trendy pants to dinner dates. My advice is to get a good pair of jeans—it’s a man’s uniform. You can even wear them with formal suits nowadays,” Lance says.

“Fatanas” made news when it was released on YouTube the day before the arrest of Pampanga representative and former President Gloria Macapagal-Arroyo in November 2011. Lance relates: “People referred to the song as anti-GMA; in my TV interviews, I insisted that it was not. To prove it, I performed ‘Fatanas’ in a TV appearance wearing a neck brace decorated with feathers. To me it’s a fashion accessory. If I was guilty, I wouldn’t wear anything even slightly resembling GMA’s neck brace.”

He bought troll dolls in the United States: “They were the only things left in the store—no one wanted to buy them because they’re ugly. The seller said these came all the way from Norway. I consider them my lucky charms. It may a coincidence, but all my artistic endeavors came through after I bought them in 2006.”

He’s been receiving gifts from supporters since he started performing as Wolf: “The first was a stuffed toy that turns into a blanket. It’s from this girl that I’m dating. I also got wolf ear muffs and hats.”

“This pendant is interesting. This is actually my blood,” Lance reveals. “A doctor friend who takes blood donations, helped me get this vial. My stylist made it into a pendant. I don’t think it’s sacrilegious.”

Accessories are important because it completes your look, he says. “It’s part of self-expression. You wear stuff that you think represent you. I wear them depending on how I feel. I have that surfer vibe nowadays, so I like using beads and ropes.”

“I’m a skater boy at heart. I’ve grown up, but I still like the look I had at 13. That’s why I have these pairs from Nike and Bape, a Japanese brand that’s a favorite of hip-hop people,” says Lance.

HE’S ALSO into short shorts, which are popular outfits for guys nowadays.

“I’ve learned to appreciate shoes that are more sleek, thanks to my stylists,” he adds. “I prefer them in brown, beige, dark brown. I wear loafers with my shorts, and boots with my pants.”

“I only have two pairs of shades. I can’t even find the other one right now,” Lance admits. “I don’t always wear them—only when I feel crazy. I don’t hide from the sun, I love it.”

Lance confesses to once being a manic DVD buyer: “I’ve probably seen only 15 percent of what I’ve acquired. I think I have over 3,000 original DVDs. I’m rehabilitated now.”

His favorite DVDs are those of Prince. “I like him, not because of his style but his musicality. He plays all instruments,” Lance says. “Also, I’m selling my music so I have to be aware of what other people listen to. So, aside from my Joni Mitchell and James Brown DVDs and CDs, I also have Justin Bieber and Katy Perry.”