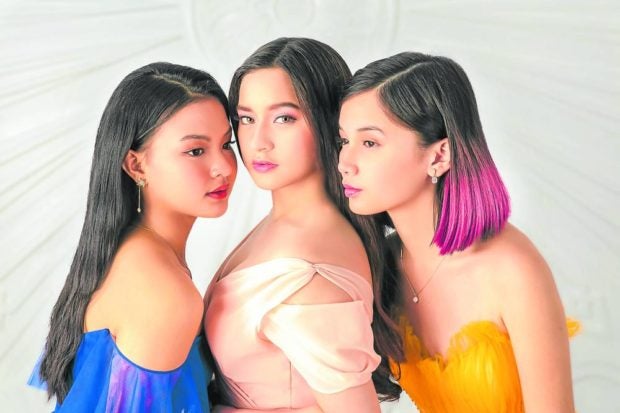 “We’re now at a stage where we’re starting to mature, so people will be expecting us to give more and improve our craft. There will be new characters and storylines in the show, so I feel a bit of pressure,” Althea, 17, told the Inquirer in a recent virtual conference for the GMA 7 soap, which is now on its third year.

“I’m still a baby in my parents’ eyes, but they can’t help but ask why I seem to be growing up so fast,” she added. “At work, we have to be alert and professional.”

Former child star Jillian Ward observed that she has grown more meticulous about her work over the years.

“For me, the growth and maturity came naturally,” said Jillian, now 16. “I became more of a perfectionist, which is a blessing and a curse. I see to it that I do my tasks well. There’s pressure now because the characters we get now have more depth. But I’m happy about that because we get a chance to show our acting skills. Now, I pay closer attention to the breakdown of scenes. Sometimes, I would be the one to point out that I’m wearing the wrong outfit for a particular scene.”

Because the Department of Labor and Employment prohibited children 15 years and below from participating in onsite shoots in 2020 because of the pandemic, Sofia Pablo, then 14, had to take a break from the show.

For a while, Sofia thought that she wouldn’t be able to come back. And then came the news that there would be another season. “I was happy when I was told there would be a Book 2, because that meant I could return,” Sofia, who’s turning 16 in April, said. “I’m happy our costars see the maturity in our work. That means we’re able to prove we’re doing the right thing. I always tell myself to do my best and prove that I deserve to be here. You won’t soar high if you don’t give your best.”

Elijah, 17, added that it’s important to absorb every constructive advice you get. “I’m happy because our costars see our efforts … They’re something we don’t really notice, so it’s nice that people point those things out. And we know our characters better now,” she said. “We’re not afraid to ask our directors (Gina Alajar and Philip Lazaro) if what we’re doing is right … if our portrayals are still true to our characters.”

Aside from new cast members like Sheryl Cruz, the second season will see the Donnas getting their respective love teams: Althea will be paired with Bruce Roeland; Sofia with Allen Ansay; Jillian will be in a love triangle with Will Ashley and Vince Crisostomo.

But what about in real life? Asked if they’re now allowed to have boyfriends, the Donnas agreed that they’re all too young to be in a romantic relationship.

“There’s a big adjustment because for a long time since ‘Trudis Liit,’ I had been doing children’s roles. Now I have a love team and it’s a love triangle,” Jillian said. “When it comes to love, my parents’ advice is to wait for the right person … What they want for me is that if I ever have a boyfriend someday, I will also end up marrying him.”

Althea isn’t ready for a relationship, but enjoys working with her partner, Bruce. “It’s fun having a love team. Bruce is kind, caring. He’s there for me if I need someone to talk to. We open up to each other,” she said. Sofia, meanwhile, said she had no trouble working with Allen because they already know each other very well. “It’s good to have a costar who’s always there for you. Allen is one of the people I’m closest to on the set. Being in a love team is tough, only if you don’t get along with your partner. But that’s not the case with us.”

Career and studies, she added, come first. “We’re too young [for romance] … There will be time for love in the future, so let’s focus on working hard and taking care of ourselves, so we can be successful,” she said.