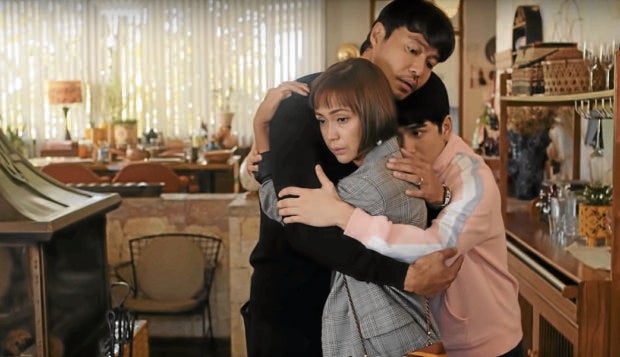 It was a hard blow, but it helped me play my character well. I’m OK. My head remains connected to my body,” quipped actress Jodi Sta. Maria, who was made to talk about one controversial scene she did with costar Sue Ramirez in the psychological thriller-drama “The Broken Marriage Vow.”

“I remember that when we were about to do the scene, we really felt nervous. I knew I could get hurt if we didn’t do it right. Also, if we make a mistake, we would have to redo the scene,” Jodi told reporters during a virtual gathering to promote the series that will start streaming on Jan. 24.

“Sue was scared. She didn’t want to hit me on the head. I said, ‘It’s OK. Just do it. Try to hit me on the top of my head, and not close to my nape because then I might lose consciousness.’ We did it in one take. It’s one of my favorite scenes in the series.”

Jodi said she also did several “iconic” scenes with Zanjoe, including one where David beat up Jill black and blue. “They should watch out for this one. The iconic scenes are those we can’t do without for the Philippine version,” explained Jodi. “You’ll see a different Z (Zanjoe’s nickname) in this project. I told him that when I look at him, I don’t see Z, but I see David.”

The story follows a married couple whose family is rocked by the husband’s romantic affair.

“[Prior to the affair], Dra. Jill had this picture-perfect life. She has a job that’s financially and emotionally rewarding. She has a kind and intelligent son, and a loving husband,” Jodi began. “Things change when she starts suspecting that her husband is cheating. Suspicion then leads to obsession. She becomes obsessed with revenge. She can no longer think logically. She does things that one can’t imagine a doctor of her stature would do.”

Jodi was then asked what lessons she wanted to share with the female audience of the series in relation to her character. To this, Jodi replied: “To be fair, I learned from this serye that our lives move in the direction of our decisions, whether we’re a man or woman. Our decisions have direct effects on our husbands, children, friends and even on the people around us. We have to be wise in making them.” 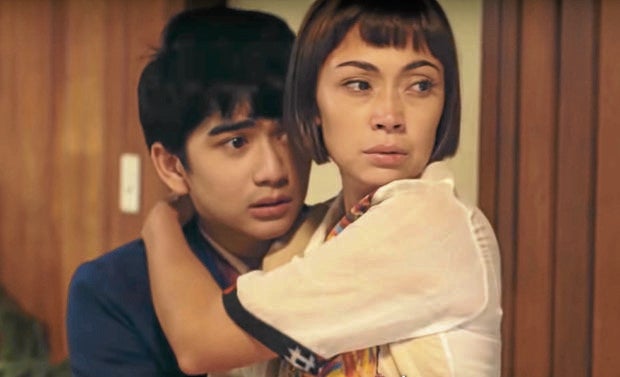 Another takeaway from playing Jill was that, “There is always life after a heartbreak. Dealing with betrayal is not easy because it is relational. You always experience betrayal from people close to you. In the end, you just have to give yourself time to heal, too.”

If ever she experiences infidelity in real life, Jodi said she would react depending on how she would see the situation. She explained: “If the infidelity was a result of a bad decision or an honest mistake, I can still give that relationship another chance. However, if I see that this is a continuing toxic pattern, that it has become deliberate, then I have to think of myself and of my child, and walk away from that relationship.”

She added: “As for being a mistress, it’s hard to judge since each person has her story. I’m also not saying that the action is justifiable. To women like Lexy, I do hope that you will eventually see your worth, that you will not allow yourself to remain a kept woman.”

Reacting to the question of “when is revenge justified,” Jodi said: “If an action results in hurting more people, then it’s not justified. If somebody betrays, hurts, lies, or does something bad to you, the antidote is always forgiveness. Others would say, ‘An eye for an eye, a tooth for a tooth.’ You have to ask yourself, ‘Will it cause more harm than good?’

“This is my personal take on the matter: You have to forgive in order to unburden yourself. It’s not an easy choice to make every single day. Forgiveness is trying to free yourself from that person’s emotional hook on you. You forgive even if the person doesn’t ask for it. You do it for yourself.” 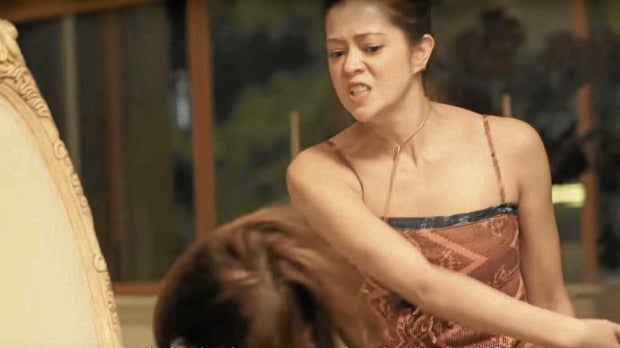 Sue Ramirez in a scene from “The Broken Marriage Vow”

Jodi said having a teenage son is one of the similarities she has with Jill. “Gio and my son Thirdy are almost of the same age. They’re both in high school and are going through the same things in life. They’re both into online gaming,” she began. “Dra. Jill and I feel the same way as a mom. We just react differently.”

“The Broken Marriage Vow” isn’t the first project that Jodi and Zaijian worked on together. Zaijian was also her son in the programs “Noah” and “Ang Sa Iyo ay Akin.”

She then admitted to feeling surprised with her reaction after seeing one particular photo of the two of them on social media. “On one side of the picture, I saw me and Zaijian when he was between 7 and 9 years old in ‘Noah,’ and then, on the other side, the two of us at present time. Bigla akong nasenti. I felt tears welling up in my eyes. I told Zaijian, ‘You were still a baby here, anak.’ I really consider him my son.”