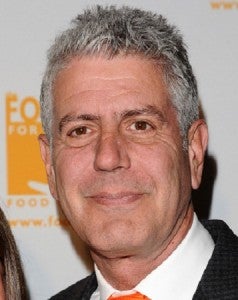 In this April 7, 2011 file photo, Anthony Bourdain attends the Food Banks Can Do Awards gala in New York. CNN announced Tuesday, May 29, 2012, that Bourdain will host a weekend show on food and travel. The series is expected to launch early next year. AP FILE PHOTO/PETER KRAMER

NEW YORK— Celebrity chef Anthony Bourdain will begin hosting a new show next year on — of all places — the news network CNN.

The weekend show on food and travel represents a departure for CNN in both content and procedure. CNN usually does its programming in-house, but in this case an outside production company tied to Bourdain will make the series.

It will air on Sunday nights in prime time and be repeated on Saturday nights.

Bourdain has done programs on both the Travel Channel and Food Network, and also appeared in the Bravo competition Top Chef. His CNN show will feature cultures around the world through the prism of dining traditions.

“We have license to love a wide variety of news, not just war and politics, but other things that reflect all aspects of our lives,” said Mark Whitaker, CNN executive vice president and managing editor.

CNN also wants to do more to distinguish its weekend programming from its weekday offerings, Whitaker said. The network is looking at other things, he said, but he would not discuss them on Tuesday.

Bourdain’s program will be made by Zero Point Zero Productions. CNN is aggressively considering proposals by outsiders, Whitaker said, something that it has rarely, if ever, done in the past.

The food show should not be considered a model for CNN programming during the week, he said. The domestic news network has suffered two of its worst ratings weeks over the past 20 years during the past month.

Whitaker said CNN continues to look at programming choices for weekdays but had no changes to announce.