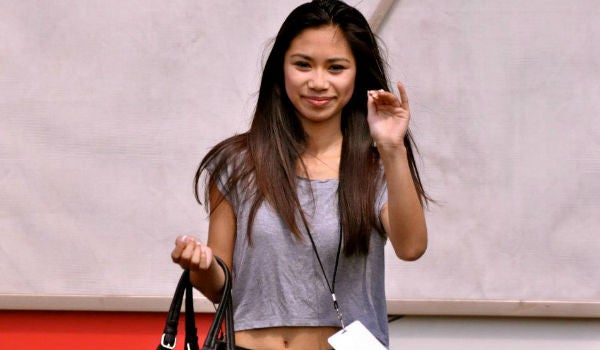 A wave and a tired smile. Photos by Elton Lugay

WASHINGTON, D.C.— “It was completely fair. Phil deserved to win.”

With those words, “American Idol” runner-up Jessica Sanchez brushed aside a protest by a Filipino-American community group. Migrant Heritage Commission, which is based here in D.C., is asking Fox TV to disclose “in the interest of transparency” how the voting was counted and how much of the 132 million votes went to the young singer.

Jessica, a close second to winner Phillip Phillips, told The FilAm: “I don’t think it’s necessary. I think Phil deserves to win, I think it was all fair. They wouldn’t ever cheat or anything like that. I think it was completely fair.”

I caught up with Jessica at a rehearsal of artists scheduled to perform at the May 27 National Memorial Day Concert to honor soldiers and veterans. With Jessica in the program are fellow Idol Chris Daughtry and Grammy-winning singer Natalie Cole.

“It means the world,” the 16-year-old was gushing. “My dad is part of the military and so is my grandfather. I’m excited, I feel like I’m really part of this and it’s an honor to be singing for everybody here today.”

Jessica’s Mexican father, Gilbert, is a Navy veteran who served in Iraq and Afghanistan. Mother Editha is Filipino. Her maternal grandfather is a retired U.S. Navy man.

“I’m excited because my grandfather is a big part of the military, and he’s here to celebrate this time with me,” she said of the PBS program dedicated to active duty soldiers, veterans and their families. “It’s like I’m singing not only to him but to everybody else here.”

Wearing tight black jeans and an airy gray top that bared her belly, Jessica arrived here in late morning and took her place at the stage directly across from the Capitol’s west lawn. She looked drained and a wee bit cross. I was looking for the toothy smiles that became her endearing Idol trademark, but they did not flash naturally across her face. Maybe the post-Idol schedules are now taking their toll on her disposition.

She listened to a briefing by the PBS production crew then proceeded to belt the “Star-Spangled Banner.” There were moments when her voice cracked, but she would pause and continue to sing as if in a whisper. Seemed to me she was saving her big voice for the big night.

From two songs, PBS decided that Jessica will be singing three — the national anthem, “The Prayer” and “America, the Beautiful,” which is the finale song. After rehearsal, she took a 30-minute break to rest, freshen up, retouch her makeup and settle down for her interview. 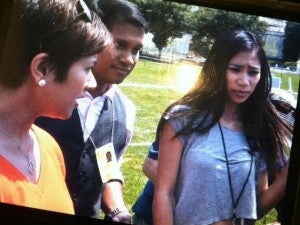 Jessica with FilAm journalists. Author is at center.

“I think Philip deserves to win,” she told me, flashing what appeared to be a forced grin. “I worked hard and it got me to the Top 2 so I’m happy about that and I’m content with it.”

She said she was eternally grateful to her Filipino-Mexican background which formed the backbone of her overwhelming support. “I had a lot of support and it doesn’t necessarily mean voting-wise, I just had support from my people, and I appreciate it so much.”

Jessica, the oldest of three children – she has two younger brothers — said she speaks only English at home, but is looking forward to learning Tagalog in the future. “I grew up with my grandma and so is my mom who are from the Philippines, they make Filipino food and dishes for us all the time.”

Jessica said she plans to pursue her music career wherever it takes her, but will definitely go to college “as a back-up.”

“Music is pretty much my number one priority, next to family. I’m going to be working on some songs pretty soon,” she said. The latest word is that Tommy Mottola has offered to produce her first album for his Casablanca-UMG label Jessica was mum about the details.

“I’m definitely working on some things right now,” she said. “I’m at this event and we all worked it out and definitely trying to keep myself busy and I’m excited for the future.