It’s official! Edu Manzano and Cherry Pie Picache are in a relationship 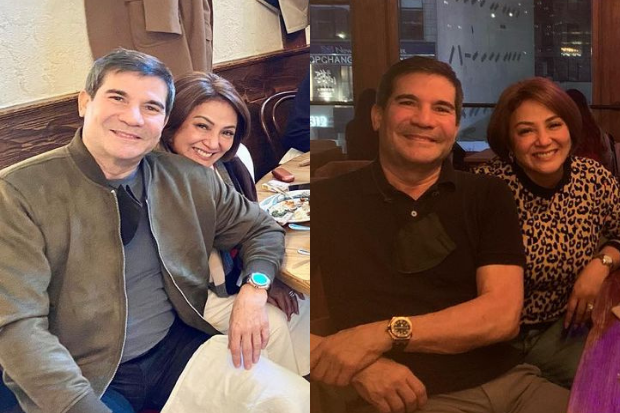 Edu Manzano confirmed that he is indeed in a relationship with actress Cherry Pie Picache, amid speculations that they are dating.

The actor revealed the real score between him and Picache in a text conversation with broadcaster Cheryl Cosim, shown exclusively on “One Balita Pilipinas” last Friday, Nov. 19.

Cosim asked Manzano to confirm if he and Picache are indeed a couple by sending him a newscast script romantically linking him and Picache, along with the question “How true?”

“You’re the funniest! Yes, my dear,” Manzano answered. The actor was asked by Cosim to confirm the relationship twice, and he answered affirmatively both times.

Fans first speculated that Picache and Manzano are in a romantic relationship after the actress was seen leaning on Manzano’s shoulder during their recent trip to New York City, as per Picache’s Instagram page last Nov. 11. They were accompanied by radio host Tim Yap as well as fellow actors Janine Gutierrez and Arci Muñoz.

Picache separated from her former partner Gary Tria in 2006. They have a son together named Nio. Meanwhile, Manzano was previously married to actresses Vilma Santos and Maricel Soriano. His last known relationship was with non-showbiz girlfriend Iryne Garcia.

Manzano and Picache star in the ongoing ABS-CBN TV series “Marry Me, Marry You.” They play an estranged couple who are also parents to Paulo Avelino’s character Andrei. Dana Cruz/JB

Read Next
Rita Daniela and Jak Roberto separate their reel life from real life
EDITORS' PICK
Comelec division junks petition to cancel Marcos COC for president
Acer starts the year off strong with the Aspire Vero National Geographic Edition
PH logs 37,070 more COVID-19 cases; over 33K others recover
‘Not yet the end’: Lawyer says Marcos Jr’s DQ cases to take lengthy process
The best of bayside and city living at SMDC’s Sail Residences
Over 3 Million worth of prizes to be won at Smart Padala’s SENDali Manalo Promo!
MOST READ
NBI foils escape attempt of Kerwin Espinosa, two others
‘Not yet the end’: Lawyer says Marcos Jr’s DQ cases to traverse lengthy process
Wendell Ramos finally gets to hold his newborn for the 1st time
Marcos camp ‘extends hand of unity’ after COC cancellation bid is thrown out
Don't miss out on the latest news and information.