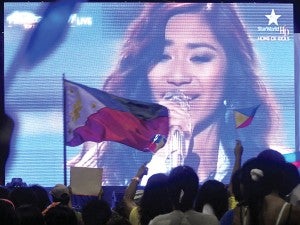 RUNNER UP Flag-waving fans from Samal, Bataan, cheer as Jessica Sanchez appears on the giant screen during Thursday’s finale of “American Idol.” Jessica lost but she remained a winner in the hearts of the Samal folk, according to their mayor. RICHARD REYES

Sanchez, who traces her roots to Bataan, got positive comments from American Idol judges Steven Tyler, Jennifer Lopez and Randy Jackson all throughout the competition and was even “saved” by the same judges when she was about to be eliminated, Golez said.

“Sanchez has caught the attention and support of millions of Filipinos here in the Philippines and abroad because of her superb voice and amazing performances in the 11th Season of American Idol,” he said.

“I am truly proud of Jessica Sanchez. I hope that her second place win would propel her to even higher heights in the entertainment industry. The entire Philippines should be proud that a future superstar that will conquer the international music scene has Filipino heritage,” Golez added.