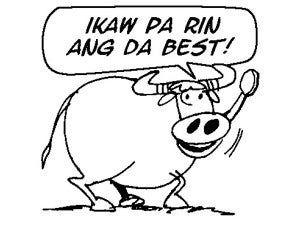 It was like losing a battle for Marine troops in Zamboanga City, who were so upset about the “American Idol” results that “nobody wanted to eat, cook, fetch water.”

Col. Orlando de Leon of the 2nd Marine Brigade in Sulu told the Philippine Daily Inquirer by phone that he and his men took time off from work to watch the popular singing competition only to learn that it was Phillip Phillips and not Philippine bet Jessica Sanchez who was named the “Idol” season 11 winner.

“They want to vent their ire on the Abu Sayyaf, but then again, they have also been rooting for Jessica,” De Leon said.

In Samal, Bataan, the downpour early Thursday could have been a prelude to the runner-up finish of Jessica Sanchez, the “American Idol” finalist whose mother hails from this town.

But there were no tears shed for the Filipino-Mexican who is widely believed here to be headed for a bright career in the American music industry.

Residents turned out to watch the “American Idol” finale in the town’s covered court at about 7 a.m., an hour before the live telecast. The night before, they were treated to a fireworks display after watching the 16-year-old Sanchez perform against eventual winner Phillips.

After the winner was announced at 10 a.m., Mayor Generosa dela Fuente went up the stage and said: “No matter what happened here, Jessica Sanchez is the winner in our hearts. For Filipinos everywhere, she was the winner.”

Sally Bugay, 50, a distant cousin of Sanchez, sat in the front row with other clan members who are relatives of the singer’s mother.

“We have been praying for her. Almost all of us, her relatives, are here now. She’s never been here and we hope to see her,” she said.

“We support her, whatever happens. We’re still happy that she won second place; that is [already a big achievement]. We’re happy for her,” she said.

Rodolfo Medina, a cousin of Sanchez’s grandfather, Eddie Bugay, said “all of the family is happy for her. She’s done better than any Filipino who ever joined that contest, even if she finished No. 2.”

Jasmine Medina, 12, who turned out to be Sanchez’s aunt (her father and Sanchez’s grandfather are cousins), watched her perform and said: “It’s fine even if she didn’t win, we’re still happy. She’s the American Idol of Samal, Bataan.”

The crowd at the town plaza on early Thursday was fewer than the more than 1,000 people who flocked to the public viewing venue on Wednesday night because of the rain. But Samaleños eventually packed the covered court as the show went on.

Some vendors from the nearby public market sold their wares to the audience. Tricycle drivers stopped plying the streets to watch the show.

Whenever Sanchez came on-screen, the people would begin to cheer and wave small Philippine flags. During her performances, and especially when she hit the high notes, applause would erupt.

The excitement peaked shortly before the winner was announced. When Phillips was declared the 11th American Idol, sighs of disappointment swept through the multitude.

Some said they had sensed Sanchez’s fate from Wednesday night’s performance when judges Randy Jackson, Jennifer Lopez and Steven Tyler gave Phillips a standing ovation and criticized Sanchez after their third round numbers.

But Mayor Dela Fuente saw a bright future for their townmate. “This is not the end, but just the beginning for Jessica. When she comes home, she’ll be welcomed [with the love of Samaleños]. It will be a great homecoming,” she said.

“Jessica is every inch the Filipino. She looks and acts like one,” said Felicito Payumo, chair of the Bases Conversion and Development Authority and former Bataan representative. Payumo and his son, Donito, joined the crowd here.

At Platinum Gym in Zamboanga City, fitness enthusiasts took a break from their regular workouts to watch “American Idol.”

Jayvee Rodis, 25, a youth council member of Barangay Guiwan, cried when he learned about the result. Sanchez “is the best singer, full of talents but all we can do right now is accept the result, I know that Jessica will reap better opportunities than Phillips,” he said.

Antonio Adraneda, a Samal resident, said Sanchez’s ancestry might have played a part in the way American viewers voted in the show.

“If Phillip had only been half-Vietnamese or something, then Jessica would win. But this is the American Idol, and Jessica is not a full-blooded American. But to us, Jessica Sanchez is the winner,” Adraneda said.

Sanchez has “music in her blood,” he said “The Bugay family is known as musicians here.” With a report from Julie Alipala, Inquirer Mindanao