From films to paintings, Richard Somes pays homage to women 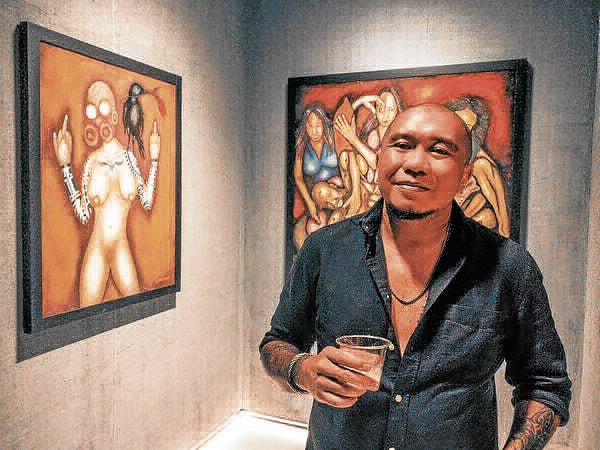 My art is my homage to women,” said film and TV director Richard Somes, who was responsible for genre films with female lead characters such as “Yanggaw” (2008), “Corazon: Ang Unang Aswang” (2012), and “We Will Not Die Tonight” (2018).

“I just find women very fascinating, and I’m very proud to say it. I guess it’s also a reflection of how I was raised,” Somes told reporters during a recent virtual chat. “If you will notice, there’s a template in the films I do. I try to show a woman’s strength in their physical and mental forms.”

The same can be seen in the images Somes painted for his first solo art exhibit, titled “Into the Mind of Richard V. Somes,” at the Secret Fresh Gallery of the Ronac Art Center going on in Greenhills.

“My paintings also reflect how I do my films—the set design, the colors, the texture, the emotion, and even the chaos. Every component is present. But while in making movies there are a lot of restraints in terms of economics, I’m free to do anything with my canvas. I can share what’s really inside my head.”

“Those who got to see my work described it as bizarre; some even said they are ‘fatalistic.’ But the women in my paintings are all resilient. They fight, they bleed, they struggle, but they always rise above any challenge that comes their way,” Somes pointed out.

Somes said it was his paintings that “saved” him when the show biz industry shut down as a result of the pandemic. He quit directing the action-drama series “A Soldier’s Heart” in order to be with his family during the first pandemic lockdown in 2020.

“In fact, three of my big canvases were already sold at a good rate. They’re not too pricey, but the deal had been a good one. I guess people saw potential in my artworks and they thought these items are worth collecting,” he beamed.

It was the pandemic lockdown that pushed Somes to return to painting as a way to “release anxiety amid all the uncertainties. I used it as a way to relax, to escape from the horror and trauma of COVID-19.”

“Later on, I began to embrace it. Besides, before I went to Manila to become a filmmaker, I had really dreamed of being a painter in Bacolod. I hung out at art exhibits there,” Somes recalled. “Prior to that, I worked as a tattoo artist … between ’95 and ’96. Surprisingly, this pandemic brought me back to something I truly love.”

Just like many, Somes said he experienced anxiety because of the lockdowns.

Somes kept himself busy by organizing a relief campaign. “We were lucky because a lot of people participated. They sent sacks of rice and bags of canned goods. Some celebrities even sent cash. We were able to send 3,000 relief packs to people in need,” he reported.

Somes said he was glad he found a way to survive the pandemic lockdowns “physically, mentally, emotionally. I’m thankful to God for giving me this talent. I chose not to be idle, to just sit down and watch TV all day. This saved me from my economic problem; and because it somehow diverted my attention, it also helped me heal from what would certainly have ended up as depression. I have since resumed making films. It’s all about attracting positivity. We just need to go on with our lives however way we can.”

Somes recently finished “Sentensyador” with JM de Guzman as lead star. He is preparing to begin principal photography for “Topakk,” also with JM, as well as Sid Lucero, Paolo Paraiso and Annicka Dolonius.

Somes said he has no intention of retiring from filmmaking anytime soon.

Read Next
Love Knots, October 29, 2021
EDITORS' PICK
Beyond the Chocolate Hills: A farm-to-table, heritage culinary adventure of Bohol
Metro Manila logged most number of new COVID-19 cases — OCTA Research
WHO says monkeypox is not yet a health emergency
A massive highway complex makes living in the South highly attractive
Guarding Sara: Why next VP is getting own security team
House energy committee chair Arroyo bats for cheap electricity
MOST READ
Leon Barretto steps up for sisters, asks dad Dennis Padilla: ‘Please stop resorting to public shaming’
LOOK: Rita Daniela pregnant with first child
Marjorie Barretto to speak up on Dennis Padilla, kids’ relationship ‘in time’
Guarding Sara: Why next VP is getting own security team
Don't miss out on the latest news and information.