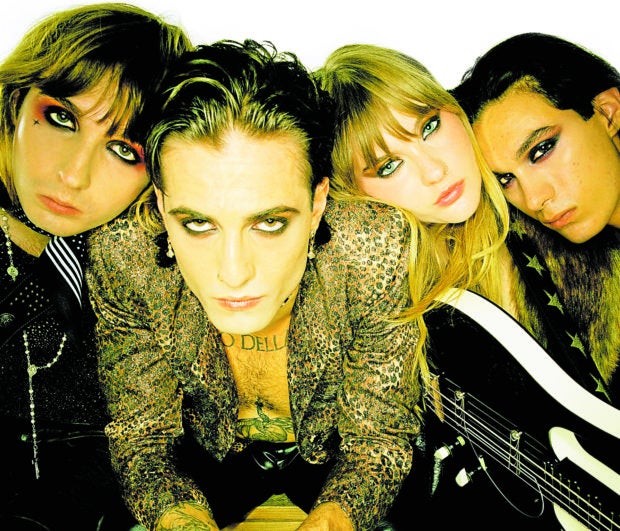 Eyes were on the quartet, who captured people’s interest, not only with their rambunctious glam and pop-rock sound, but also with their flamboyant, gender-blurring aesthetics and their unadulterated, carefree energy onstage. But with the glowing praise came criticism. But that’s par for the course in show biz, especially for acts suddenly thrust into the spotlight.

That gave them a song idea.

“After Eurovision, we had a lot of attention. There were lots of times when we felt we did something great but people criticized it. And I wanted to translate that into the lyrics,” the band’s lead vocalist, Damian, said in a press conference livestreamed from Berlin, Germany. The Inquirer was invited by Sony Music Philippines.

“Perhaps you’re doing something you feel is great, but they don’t understand it, so they make bad judgments and comments. I wanted to make fun of this situation,” he said.

The result is “Mammamia,” a tongue-in-cheek rock bop that “also brings dance and club vibes” with its “strong bass riff and a rhythmic drum.” Released this month in the Philippines, the song talks about people’s misperceptions of one’s behavior, thoughts and intentions.

But the members, all in their early 20s, are past analyzing and dwelling on what other people have to say about them. “We try to think about what makes us feel satisfied. That’s what we try to do, because it’s impossible to please everyone,” Victoria said. “So we just focus on what we like.”

The four artists, who have been friends since their junior high days, got their start on the scene, busking on the streets of Rome. In 2017, they entered the 11th season of “X Factor Italia” and finished second. Influenced by a mix of rock, funk, pop, hip-hop and reggae, the band went on to release two studio albums, “Il ballo della vita” (2018) and “Teatro d’ira: Vol. I” (2021), which both have multiple platinum certifications in Italy.

Their three previous singles, “Zitti e Buoni” (for which they won Eurovision), “I Wanna Be Your Slave” and “Beggin” have so far been streamed more than 234 million, 427 million and 684 million times, respectively, on Spotify. They also impressed punk icon Iggy Pop, who recorded vocals with the band for a new version of “I Wanna Be Your Slave.”

Most recently, Måneskin, which means “moonlight” in Danish, became the first Italian band to score nominations in the Best Rock and Best Group categories of the MTV Europe Music Awards, which will take place on Nov. 14.

Over the past 10 years, rock music has fallen out of fashion in the mainstream scene, which is currently dominated by hip-hop.

Do they think rock is starting to regain popularity?

“Maybe it is, slowly. I think the fact that this kind of music is now doing great again is good for people in bands who want to do it, but get told by the labels that it’s impossible. It will give them more hope to be free and do whatever they like… I see many of our fans messaging us, saying they’re starting to buy instruments, starting up bands and stuff like that. It’s insane and very cool,” Victoria said.

Excerpts from the press conference:

Damiano (D): We wrote this song immediately after Eurovision. We had only a few days in the studio, but fortunately, the song came out just a few hours after. That’s why we thought it was going to work; that it was going to be a banger for us.

Sometimes it takes months and months to write a song. But sometimes you’re just very very inspired and you like what you’re doing.

Victoria (V): We try to have fun doing it. It’s not serious because it’s a very silly and carefree song. It was during a moment when we were experiencing a lot of things… The song came together naturally… We had fun and enjoyed ourselves, and we’re very happy about the results.

The phrase “mamma mia” can both have positive or negative connotations.

D: It’s a mix. It’s just an exclamation of surprise, about how people react to what you’re doing. We also wanted to make fun of that stereotype, because we’re from the Italian stereotype.

You keep the songwriting among yourselves?

Thomas (T): No outside songwriters… It depends on the situation. Sometimes we start with a guitar riff or sometimes with a bass riff. Sometimes, with drum beats. But we try to mix each other’s influences.

V: We feel very free doing it with just the four of us. We think that’s important because we want to express how we feel. And if we do something good or bad, we want to write that ourselves and not to have other people writing stuff. We have been writing our own music since we started and we never worked with other authors or anything else. I think this works fine for us. We’re still young, so there are still a lot of things to talk about, express and experiment on.

D: And I’m kind of a diva to be honest, and would never let anyone write music for us! (laughs)

You always make it a point to present yourself as a four-piece band.

D: We always refuse to split up when we’re asked to do interviews or other things. We just want to push ourselves as a band. Of course, we have our own individualities, but we want to stick together and build something great together.

Why do you think fans are going crazy over you?

D: We’re good at what we do, we’re beautiful—we’re humble!—and we’re Italian!

But we don’t know the reason. Maybe it’s because of our authenticity. We always try to be natural in what we do. We never do something that doesn’t make us feel comfortable. Our distinctiveness shines through and people see that we’re having fun when we’re performing or just doing interviews.

We also have a good balance among us. People also can see our friendship and how natural everything we’re doing. I feel like they’re really close to us because we’re normal guys in our 20s who do something big. And that gives hope to the young ones and teenagers to do something great and work for something they love in the future.

Do you feel pressure to act like role models because of that?

D: We don’t see ourselves as role models or teach anyone anything. We just try to be the best version of ourselves. And if people see us as such, then it’s a good thing. But we don’t feel we have that kind of responsibility. Of course, we don’t want to do dumb things in public, but that’s more for our sake than others.’

When we get off the stage, we stop being rock stars… We hang out with friends and lead normal lives. We separate our jobs from our private lives, that helps us to stay grounded.

How do you stay grounded? Do you think these things can get into your head?

V: We don’t think we’re important just because of our job… I think we can help each other manage the pressure and all the things this job can bring. I think we can face it together as a team. Everyone’s kind and gives us a chance to be ourselves, but at the same time, keeps us grounded. when we’re doing something wrong.

You also have this androgynous fashion and look.

V: It’s not a thing we choose to do on purpose—it’s just the way we are. Especially in Italia, a conservative country, many people think [of you differently] if you’re not dressed normally. We experienced this a lot when we were teenagers.

It’s something you grow up with, unfortunately; it’s like that for everyone. But of course, we think it’s wrong or stupid to have these prejudices that stop people from being themselves. So with many people looking at us, we feel that we can help spread a positive message and tell them that it’s OK to be who you are… Talking about important topics like self-esteem and confidence is a good thing, it can help a lot. Fans are telling us about that.

The United States is starting to catch up.

Any new music coming up?

V: We’re already working on that. We have few songs in our pockets. But like everything we do, we want to do it properly and make sure we’re 100 percent satisfied with it. No rush. We will take our time and enjoy “MAMMAMIA.”