For Bataan town mates, Jessica Sanchez is the winner 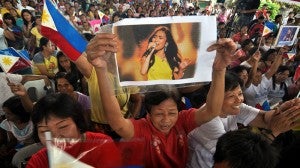 Relatives and Samalians cheer for Jessica Sanchez as they watch the live broadcast of American Idol Finale at Samal Coevred Court in Samal, Bataan.PHOTO BY RICHARD A. REYES

SAMAL, Bataan -The downpour that drenched Bataan early Thursday could have been a prelude to the runner-up finish of Jessica Sanchez, the American Idol finalist whose mother hails from this town.

But there were no tears shed for the Filipino-Mexican who is widely believed here to be headed for a bright career in the American music industry.

Residents turned out to watch the American Idol finale in the town’s covered court at about 7 a.m., an hour before the live telecast. The night before, they were treated to a fireworks display after watching the 16-year-old Sanchez perform against eventual winner Phillip Phillips.

After the winner was announced at 10 a.m., Mayor Generosa de la Fuente went up the stage and said: “No matter what happened here, Jessica Sanchez is the winner in our hearts. For Filipinos everywhere, she was the winner.”

Sally Bugay, 50, a distant cousin of Sanchez, sat in the front row with other clan members who are relatives of the singer’s mother. “We have been praying for her. Almost all of us, her relatives, are here now. She’s never been here and we hope to see her,” she said.

“We support her, whatever happens. We’re still happy that she won second place; that is [already a big achievement]. We’re happy for her,” she said.

Rodolfo Medina, a cousin of Sanchez’s grandfather, Eddie Bugay, said “all of the family is happy for her. She’s done better than any Filipino who ever joined that contest, even if she finished No. 2.”

Jasmine Medina, 12, who turned out to be Sanchez’s aunt (her father and Sanchez’s grandfather are cousins), watched her perform and said: “It’s fine even if she didn’t win, we’re still happy. She’s the American Idol of Samal, Bataan.”

Because of the rain, the crowd at the town plaza early Thursday was fewer than the more than 1,000 people who flocked the public viewing venue on Wednesday night. But Samaleños eventually packed the covered court as the show went on.

Some vendors from the nearby public market sold their wares to the audience. Tricycle drivers stopped plying the streets to watch the show.

Whenever Sanchez came on screen, the people would begin to cheer and wave small Philippine flags. During her performances, and especially when she hit the high notes, applause would erupt.

The excitement peaked shortly before the winner was announced. When Phillips was declared the 11th American Idol, sighs of disappointment swept through the multitude.

Some said they had sensed the result from Wednesday night’s performance when judges Randy Jackson, Jennifer Lopez and Steven Tyler gave Phillips a standing ovation and critiqued Sanchez after their third round numbers.

But Mayor Dela Fuente saw a bright future for their town mate. “This is not the end, but just the beginning for Jessica. When she comes home, she’ll be welcomed [with the love of Samaleños]. It will be a great homecoming,” she said.

“Jessica is every inch the Filipino. She looks and acts like one,” said Felicito Payumo, chair of the Bases Conversion and Development Authority and former Bataan representative. Payumo and his son, Donito, joined the crowd here.

Read Next
NBI nabs con artist who gypped actress Helen Gamboa, other victims
EDITORS' PICK
EuroMillions Superdraw: A lottery draw unlike any other is coming to the Philippines
‘Justice will be done,’ Duterte assures as he vowed probe on Jolo incident to bare ‘truth’
Water remains our saving grace right now
Smart releases Hyun Bin’s second TVC
Current dominant strain of COVID-19 more infectious than original—study
DOLE: Return of OFWs’ remains from Saudi to be ‘delayed,’ deadline moved to ‘early next week’
MOST READ
BREAKING: Duterte signs anti-terror bill into law
Locsin warns of ‘severest response’ if China’s army drills in SCS ‘spill over’ to PH domain
Duterte tells military: No other president looked at you the way I did
‘Very timely, historic’: Senators laud passage of anti-terror bill despite ‘pressures’
Don't miss out on the latest news and information.