Elon Musk says he and musician girlfriend Grimes are ‘semi-separated’ 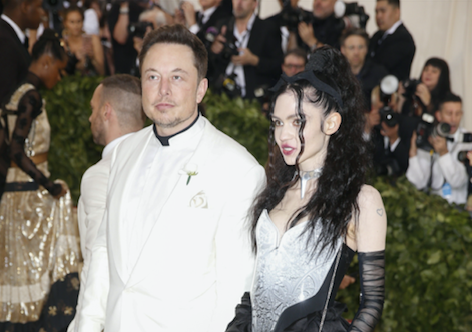 Elon Musk and Grimes arrive at the Metropolitan Museum of Art Costume Institute Gala (Met Gala) to celebrate the opening of “Heavenly Bodies: Fashion and the Catholic Imagination” in the Manhattan borough of New York, U.S., May 7, 2018. Image: Reuters/Carlo Allegri

LOS ANGELES — Elon Musk and his girlfriend, Canadian singer Grimes, are “semi-separated” after three years together, the billionaire chief executive of Tesla and SpaceX told Page Six in a story published on Friday.

The publication quoted Musk as saying the pair, who began dating in May 2018, remain on good terms and are co-parenting their one-year old son, named X Æ A-Xii Musk.

“We are semi-separated but still love each other, see each other frequently and are on great terms,” Musk said.

“It’s mostly that my work at SpaceX and Tesla requires me to be primarily in Texas or traveling overseas and her work is primarily in LA,” he added. “She’s staying with me now and Baby X is in the adjacent room.”

Spokespeople for Musk and Grimes did not immediately respond to requests for comment. JB