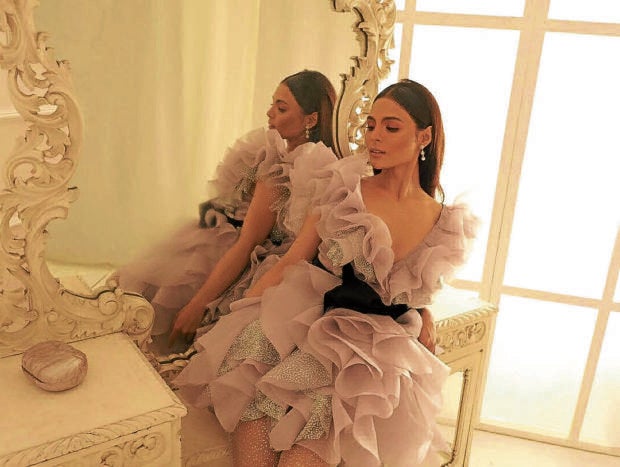 Now that she has officially signed up to be part of Kapamilya’s roster of talents, actress Lovi Poe said she dreams of collaborating with the network in a project where she could play the first woman Panday, a comics iconic character that her late father, Fernando Poe Jr., popularized in the ‘80s.

“I would love to do Panday as a woman,” she told reporters during a virtual conference on Thursday afternoon. “It would also be interesting to work with Coco Martin because he played the role recently. It would be nice to have us together in one project—Jericho Rosales, too, because he portrayed Panday on TV. There’s just a lot of people I see who could be in this kind of show.”

What is definite for Lovi as a Kapamilya artist is the local adaptation of the South Korean series “Flower of Evil,” with Piolo Pascual as her leading man.

This was why when she first stepped into the Kapamliya grounds on Thursday morning, it was Piolo who first greeted her and handed her flowers. “I had butterflies in my stomach. The feeling was different when I first stepped in here. I’ve been here before as a guest, but to come here as a Kapamilya was something amazing. I’m grateful for the warm welcome. People really made me feel at home,” she told Robi Domingo, who hosted Lovi’s meetup with the media.

“It hasn’t sunk in yet. It all felt like a dream. When Piolo walked in and brought me flowers, it was like I’m in an actual dream with him. I’m happy to have been entrusted this project with Piolo,” the actress declared.

There have been rumors as early as 2009 of Lovi’s plan to transfer from GMA 7, but the actress said: “I don’t remember if there was any formal offer before. We haven’t had any formal conversation then. What matters is now. You know how they say about timing being everything,” she pointed out.

While Lovi admitted that it was not an easy decision to make, she added that there wasn’t really any “major factor” that led to her actual transfer from GMA 7, her home network for the last 15 years, to the Kapamilya network.

“I’m going to be completely honest. It was one of the toughest things I’ve ever had to do. GMA 7 took care of me, too. They’ve been good to me. I have nothing but good words and respect for the people I’ve worked with there. It was tough, but I’m here to celebrate my new home and family. I’m just blessed that I have a lot of people who believe in me. In this room, I have amazing people who welcomed me with open arms.”

She further said: “We don’t burn bridges. I’m going to miss everything in GMA 7—my routine, the people I’ve worked with there, and my friends. I will always be grateful to them. I will not be where I am now without them. I’d like to believe that they’re also happy for me. I’m looking forward to experiencing new things, to starting different relationships, and making new friends. I’m very blessed to have worked with the best of the best in GMA 7, not just the actors but also the members of the creatives there. I feel like it’s time to work with the best of the best in ABS-CBN. You not only have amazing actors here, but also amazing directors. More importantly, I want to make new friends here.”

Lovi’s career is being managed by Leo Dominguez. A lot of her friends under Leo’s talent management team have also joined the ABS-CBN family. “At least I already have friends here, like Paulo (Avelino), Janine (Gutierrez) and Kuya Ogie (Alcasid). Paulo and I, we go way back. He is one of the actors I want to be able to work with here,” said Lovi. “I have so much to look forward to now that I’m here—movies, music, and even as simple as going to ‘Asap’ and performing there.”

She said she would also like to work with Kapamilya heartthrobs such as Gerald Anderson, JM de Guzman, as well as Zanjoe Marudo and Carlo Aquino, whom Lovi said she has already worked with before. “They are too many to mention, and not just men, but even the heartthrob women of ABS-CN.”

Lovi also made mention of her acting gig in the Hollywood project “Chelsea Cowboy,” which has Alex Pettyfer and Poppy Delevigne in the lead. It is based on the life of American actor and bodyguard John Bindon.

Hollywood gigLovi plays Dana Gillespie, a singer who hired Bindon as her personal security. “I’m nervous, but this is something that I’ve always been wanting to do. It’s finally going to happen,” said Lovi, who is scheduled to fly to the United States in October for the shooting. “I’ll be working with a dialogue coach because I will have a different accent. Right now, I’m just trying to make sure I get there prepared.”

She said she hoped to contribute to bridging the gap between the Philippines and the world in relation to filmmaking. “I would want to be able to do a Star Cinema movie that would be released abroad or something that’s a collaboration with people, hopefully, from Hollywood. That would be such a dream,” said Lovi.

Music collabs are also among Lovi’s goals. “There are a lot of Filipino singers who are making it abroad. I’m just really happy for everyone who is taking the risk to get out of their comfort zones and to try it out in this different playing field. It’s something that I’ve been doing as well. It’s going to be great, I just know it. It’s about time that we expose Filipino talent to the world.” INQ