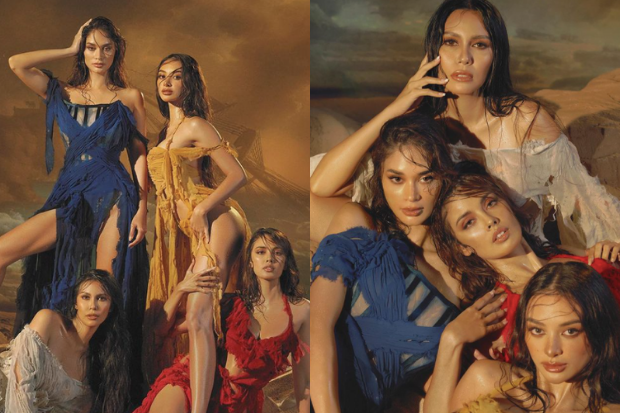 “Did someone say, Queens? From the powerhouse of Asia, Team Philippines. Me and my girls for Harpers [Bazaar] Vietnam 10th Anniversary issue,” she said, accompanied by photos of the magazine cover.

Wurtzbach showed similar photos through her Instagram page also today. She then made a reference to the 2011 film “Temptation Island,” which is about four beauty pageant contestants who found themselves deserted on an island. It is a remake of the 1980 comedy classic by Joey Gosiengfiao.

“Walang tubig. Walang pagkain… ‘Di magsayaw na lang tayo! (There’s no water. No food… Then let’s just dance!)” she said, quoting the films. “Me and my girls on the cover of @bazaarvietnam. Timewarp to Temptation Island version 2021.”

For her part, Young also lifted a quote from the film while displaying the magazine cover and other photos from the issue on her Instagram page on the same day.

As part of being cover girls, the four women discussed their respective pageant journeys and the activities they did after their reign. Appearing on the magazine cover together was a “meaningful” experience for them, they told Harper’s Bazaar in an exclusive interview today.

Fellow celebrities Alex Gonzaga, Iggy Azalea and GOT7’s Youngjae were also previously featured for Harper Bazaar‘s 10th anniversary. This is not the first time Wurtzbach, Young and Verzosa appeared on the cover of the Vietnam-based fashion magazine, as they were featured as its cover girls in January 2018. JB