The missing ‘paper’ in LJ and Paolo’s lives 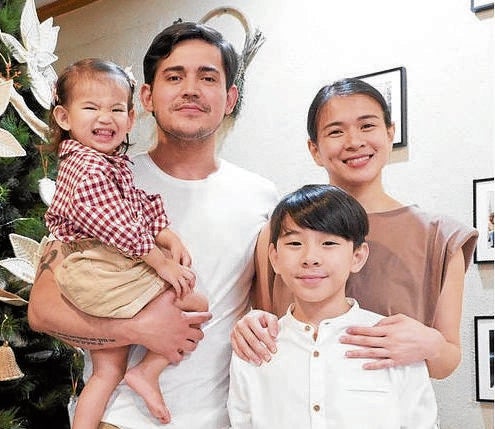 LJ with Paolo Contis and kids Summer and Aki

They’re still missing “the paper,” but LJ Reyes and Paolo Contis might as well be a married couple.

“’Yung paper, ’yun lang siguro ang wala. But the relationship and the foundation are there … We never really think of ourselves as not [being a couple]. Now, we’re living our lives with the goal of raising our family and spending our lifetime together,” LJ said in a recent virtual conference.

If they could have it their way, LJ said that, of course, she and Paolo would love to eventually tie the knot. “But some things are out of our control,” said the actress, who didn’t go into detail as to what those are.

“Gulatan na lang!” jested LJ, who has a 2-year-old daughter, Summer, with Paolo. She also has a 10 year-old son, Aki, from her previous relationship with Paulo Avelino.

LJ and Paolo have been together for six years now, but they still continue to discover new things about each other. For one, LJ never knew that Paolo can be even more reliable and protective than he already is until the COVID-19 pandemic hit.

“Maaasahan si Paolo. He shields us from any harm—kahit lamok lang ’yan! We feel his protection all the while,” the Kapuso star said. “And in turn, I want to support him the best I can.”

In fact, at the onset of the lockdowns, Paolo volunteered to do most of the work so LJ can stay at home with the children. “We decided that he will be the one to go out, especially in the beginning. But now we’re starting to get into rhythm and learn more about the virus and how we can protect ourselves,” she said.

And all the challenges of late, LJ said, have turned them into a stronger team. “You always have to have plans and discuss all the things that need to be addressed. It doesn’t necessarily mean that you always have to meet eye to eye—you need to learn how to compromise. If he has a better plan, then we go with that,” she said.

Now that they’re getting the hang of their new work and family dynamics, LJ has started working, doing guest appearances on shows like “Tadhana” and “Magpakailanman.”

“Staying with the kids is still the bigger priority for me at the moment but that doesn’t mean I can’t work. Paolo and I just need to sort out our schedules, because we can’t be out at the same time,” the 33-year-old actress said.

LJ, who was last seen in the 2018 thriller series, “The Cure,” has also been raring to return to the regular teleserye grind. “I miss everyone at work. On the set, you’re surrounded with many people—the opposite of what’s happening now at home,” she said. “But at the same time, I’m thankful I got to spend the past year or so with my children every day, which is something you can’t do when you’re busy.”

But she will feel more secure, she said, if she can head into a taping bubble fully vaccinated. “I’m still waiting for the right timing for a television series. Vaccinations are ongoing and I hope our situation continues to get better,” she said. “But regardless, you have to double up with prayers.”

LJ, who has been with GMA 7 for the past 17 years, recently renewed her contract with the network. And throughout her stay, the “StarStruck” season 2 runner-up has never felt the need to transfer to other networks.

“My dream is to work with different actors and directors. But thankfully there’s now a chance to do so through other venues like indie films,” said LJ, whose performance in the Jun Lana drama “Anino sa Likod ng Buwan” earned her the best actress trophy at the 2016 Gawad Urian Awards.

“Despite everything that has happened in my career and personal life, GMA 7 continued to support me and give me projects. I didn’t have a reason to leave,” she added. “I have grown a lot both as an actress and as a person. They were understanding of my life decisions. If you want to focus on being a mom first, they will say, ‘Do it, we’re just here.’”