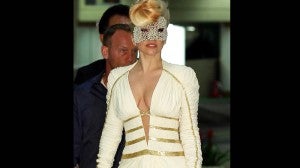 MANILA, Philippines—Religious groups on Friday urged that the Manila concert of American pop singer Lady Gaga be banned to prevent her from influencing young Filipinos.

Catholic leaders called on followers of the Church to boycott Lady Gaga’s concert, which, they said, would promote godlessness.

“Her attitude seems to promote godlessness, offensive to any religion,” Sorsogon Bishop Arturo Bastes, a member of the Permanent Council of the Catholic Bishops’ Conference of the Philippines, told reporters.

Bastes said some of Lady Gaga’s songs were blasphemous. “People have the duty to discern the quality of entertainment,” he said. “Christians must exercise self-censorship to avoid shows that are harmful to their faith.”

Manila Auxiliary Bishop Broderick Pabillo called on the government to follow the leads of South Korea and Indonesia and ban Lady Gaga’s concert.

“We should protest that,” Pabillo said in an interview on Church-run Radio Veritas. “Indonesia and South Korea did not allow that concert because their governments saw that she is not a good influence, so I hope it will be the same here.”

Henrietta de Villa, chair of Parish Pastoral Council for Responsible Voting (PPCRV), agreed with Pabillo. “We are a Catholic country but look at the way she insults our faith and the way she tramples on our Lord,” she said. “We should stand up [for our faith]. We should not allow her to have a concert here.”

Malacañang won’t do anything to stop the concert. Deputy presidential spokesperson Abigail Valte said teenagers should seek advice from their parents before going to the concert. “We will not comment anymore,” Valte said.

Christian groups opposed the holding of Lady Gaga’s concert here. Speaking at a news conference in Mandaluyong City, angry leaders of various organizations under the United Christian Groups called Lady Gaga names and accused her of “symbolizing everything that is corrupt and demonic.”

Behind the row of a dozen pastors and bishops stood around 20 teenagers wearing white T-shirts that bore a crossed-out image of Lady Gaga, with a text that read “#stopladygagaconcert.”

“We believe that this concert is grossly blasphemous, immoral, lewd, obscene and carries demonic and occultic undertones that are insults to our God and are direct attacks against our Christian faith,” Fred Magbanua, one of the Christian leaders, said.

The Christian leaders cited Lady Gaga’s songs “Born This Way,” which they said encouraged homosexuality, and “Judas,” which they claimed to be making a “mockery” of their “religious beliefs and moral fiber.”

In “Judas,” Lady Gaga describes herself as “a fame hooker and a prostitute.”

Lady Gaga’s “Born This Way Ball” concert will be held at SM Mall of Asia Arena in Pasay City on May 21 and 22.

Mall of Asia Arena released a statement yesterday saying that as responsible venue provider “we have requested the production company to make the presentation entertaining, fun and stir away from controversial songs.”

This time, however, she has become too controversial.

“This concert has to be banned,” said Manila Rep. Benny Abante, who is also a religious leader. “We will pray against it and do everything we can to oppose it on all fronts,” he said.

Abante warned the organizers and sponsors of the concert–Smart Telecom, SM and Ovation Productions Inc.–that the religious groups would go to court if the concert pushed through.

The concert, Abante said, would violate Article 201 of the Revised Penal Code, which says that any person who publicly exhibits or cause the exhibition of any indecent or immoral show that “offends race or religion” will be imprisoned for six months to six years.

“I am reminding Lady Gaga that unlike the Panamanian diplomat accused of rape, she does not have any diplomatic immunity … unless she wants to stay here for six years,” Abante said, referring to Erick Bairnals Shcks, a technical officer at the Panama Embassy, who fled Manila last week to avoid prosecution for rape.

Abante said his group had sent a letter to Pasay Mayor Tony Calixto asking him to stop the concert.

Macalintal and Atienza reminded Calixto that Lady Gaga is known for her “controversial persona, racy getups and satanic lyrics [of her songs] that threaten to destroy children’s sense of morality.”

Macalintal and Atienza said “king with no crown” referred to Jesus.

Calixto issued a statement, saying he had formed a group that would monitor the concert.

He urged the concert organizer, Ovation Productions, to stay within the terms of the permit issued for the concert. The terms include provisions against nudity, obscenity and immorality.

Pointing out that Lady Gaga’s concert has been banned in Korea, Indonesia, Singapore and Malaysia, the religious leaders said she should likewise be stopped from holding a concert here, as the Philippines is a “Christian country.”

The leaders of the groups also appealed to parents to forbid their children to watch the concert. With reports from Nathaniel R. Melican and Norman Bordadora