'Jackass 4' is headed our way, so watch out | Inquirer Entertainment
Close
menu
search

‘Jackass 4’ is headed our way, so watch out 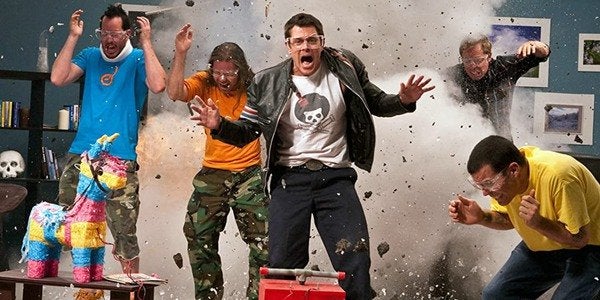 In a time when everyone seems so serious on being politically correct, socially conscious, and so uptight about everything, even in what goes on in movies, it sure feels like everyone is “walking on eggshells,” and because of this forced mentality of trying to please everyone and not offend anyone, it has made certain movie genres since 2015 stale, dull and boring.

I can’t believe that in my early 30s now, I have lived to see all these changes in movies. I mean, what happened? Why have people become so darn sensitive to everything? Why are we losing the ability to truly enjoy a movie without thinking of so many unnecessary things? Movies are supposed to be a getaway from reality or at the very least a break from it. Not meant to be a “public service” reminder each time, man.

Now, this is where “Jackass 4” from Paramount Pictures comes in, and it is about time, if you ask me. Seriously, maybe this is the proverbial “kick in the b****!” that would perhaps finally wake up Hollywood into making movies again that everyone can enjoy for a few hours without being reminded over and over again of what society has become and what we can do or can’t do. I mean “good luck” trying to tell the Jackass crew what they can do and cannot do.

I find it to be a relief that the original, well, almost the entire original cast of Jackass has gotten back together to make the long-awaited fourth movie in their hit movie franchise.

It has been 11 years since Jackass 3D was released into theaters worldwide and as expected, it became a monster hit in the box office. The original Jackass cast members who have returned for “Jackass 4” are: Johnny Knoxville, Steve-O, Chris Pontius a.k.a. “Party Boy,” Preston Lacy, Wee Man, Dave England and Ehren McGhehey a.k.a. “Danger Ehren” are all confirmed to return, with other celebrity guests.

But sadly, Ryan Dunn won’t be there since he has passed away, and neither will his best friend Bam Margera be there too due to his continuing battle with substance abuse. So, you lose two integral, popular and irreplaceable original cast members there right off the bat, but it has been confirmed that there are three new cast members that have been added to help fill the void.

I remember watching “Jackass 3D” eleven years ago, enjoying their insane stunts, laughing out loud at their obscene yet shamelessly hilarious actions, things they did that I can’t even discuss here, and their constant outdoing of each other on who can make the most memorable stunt in that movie.

The one other observation I had while watching Jackass 3D was these guys are already getting old and yet they still have that fearless spirit, childish imagination and youthful enthusiasm that carried them throughout the television series and movies.

All of the original Jackass cast members are well into their 40s, if not 50s, and those bones get brittle and recovery time will get longer and longer for all of them. Especially with Johnny Knoxville and Steve-O who have broken many bones, lost brain cells due to concussions, and have spent time in hospitals for doing the MTV series and the movies.

The two original Jackass cast members have suffered long-term health issues, especially Johnny Knoxville who broke an unmentionable doing a motorcycle stunt gone wrong but still managed to have kids with his partner, and Steve-O who we all know has taken the most shots down south ended up getting a vasectomy due to the popular belief he may have lost the ability to have kids because of getting hit down there always. Luckily, Steve-O has been vocal in his desire to have no kids, so I don’t think it is much of a loss for him. Humorous to some, but a shocking reality at the price they have paid in doing their awesome, insane and mind-blowing stunts. They are certainly brave. And stupid.

After all of that life-changing effects on their bodies, both Johnny Knoxville and Steve-O are still more than willing to do another Jackass movie for everyone.

For the past 21 years on and off, the Jackass crew literally sacrificed their bodies to be able to do the wildest, weirdest and stupidest stunts, that even the best professional stuntmen in Hollywood refuse to do. These guys take pride in doing things that would make people shudder at the mere thought. There is a sense of intrepidity there among the Jackass crew because to me, they are truly people who live without fear, which is why they are beloved by so many to this day. And I believe that is one reason the Jackass franchise has survived even during years of inactivity in between movies after the MTV series ended.

So I find it interesting as to what kind of stunts they will still be able to do at their current physical state and age, of course. This is in no way a knock on them but rather a safety concern issue that I think everyone in my age group who watched these guys in their teens does feel for them because they are only human, after all.

As a fan of these guys, I would not want any of them to get seriously hurt or die in completing this movie because we already lost Ryan Dunn due to drunk driving many years ago and Bam Margera is battling his demons, and I highly doubt that we will ever see him again appear in a Jackass movie unless he cleans up his act.

Whether the fourth movie entitled  “Jackass 4” will be a “swan song” and a final chapter to the Jackass franchise remains to be seen. I hope not, of course, because in many ways they are the last of their kind and no one has come close to what these guys have done and have survived just to entertain all of us.

They have done things that would surely land the average person in the hospital or in the morgue, which convinces me that the original Jackass crew was built for this and that no one else should do or attempt anything they have done in the MTV series and movies, and what they will do in “Jackass 4.”

Either way, upon reflecting, I believe the original Jackass crew can be a reminder to everyone to not take ourselves too seriously and not to take life too seriously. Enjoy, smile and have fun.

As they themselves have said it best, “Leave it to the professional idiots.”