‘Avengers’ actor is a brand-new dad 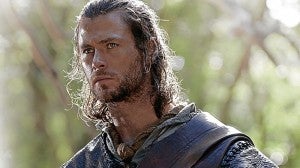 LOS ANGELES—Chris Hemsworth had just become a first-time dad recently, but here he was at Arundel Castle in West Sussex, England, promoting his latest film, “Snow White and the Huntsman.”

It was a crazy weekend for the muscular Australian actor who arrived dressed all in black, his hair tied into a ponytail. He looked focused and composed, although his wife, Spanish actress Elsa Pataky, had just given birth to a girl, India Rose; his latest movie, “The Avengers,” was setting huge box-office numbers, and now, he had to sit down for an interview on “Snow White and the Huntsman.”

“It’s all wonderful,” he said with a smile, referring to this confluence of major events happening on this recent weekend. “None of it was really planned—the family, ‘The Avengers,’ or this film coming together at the same time. They have all collided and that’s incredibly exciting. It’s a mixture of many things happening simultaneously.”

The brand-new dad said he and Elsa both like the name India. “I always liked India or Indiana,” said Chris, who is rugged, down-to-earth, and friendly, qualities often associated with folks from Down Under.

“A kid of a friend of mine—his name was Indian—had scruffy blonde hair and ran around on a skateboard. I love that kid. I have a fond memory of that name and that personality.”

“It was amazing,” he described his feeling when he held India for the first time. “My older brother (Luke), who has three little kids, said to me, ‘You realize straight away that life’s not about you anymore.’ What a great thing it is. I instantly felt that. It’s tough being away from her now.” Luke and a younger brother, Liam, are also actors.

On falling in love with the Madrid-born Elsa, whom he married in Indonesia in 2010, the hammer-wielding Avenger said, “You can’t plan any of that. It just happens together and happens naturally. For me, I knew pretty quick and for a number of reasons.

“She’s an incredibly kind and wonderful person. She enjoys life and has a great sense of humor. We have fun together. That’s what it’s about.”  Laughing, he described what their version of having “fun together” was: “At the moment, raising a kid!”

“I haven’t yet,” he answered when asked if he had swapped baby stories with his co-star Charlize Theron, who plays the Evil Queen. The actress recently adopted a baby boy. “We keep passing each other in the hallway. We haven’t had a good chat yet but we will.”

Chris said he hoped to be a good parent like his mom and dad, a teacher and a social services counselor, respectively. “My parents had myself and my brothers when they were pretty young,” he pointed out. “That’s exciting—to be able to do as well. The good thing was that we were able to travel around with my parents. Whatever they were doing and wherever they were going, we went along.”

“I’m sure there will be times when I’ll be strict, but I don’t know,” he said of the kind of dad he might be to India. “I have no great thoughts on it at the moment. Right now, it’s about how we feed and sleep, where she’s going to sleep, assembling strollers, changing tables and things.” He added with a chuckle, “Changing diapers—that’s my focus at the moment.”

He described his upbringing: “It was respect for people. When you have a great family, appreciating where you come from and understanding that not everyone has it that way, you’re able to have a greater understanding of the world and different people’s positions. That was partly because we lived in an Aboriginal community in the Outback. We saw a completely different way of life from what it was like in Melbourne and other parts of Australia.”

In “Snow White and the Huntsman,” a kiss plays a crucial part toward the end. He said he too had a memorable kiss in his life—his first buss. “It was like a Grade 5 birthday party and it might have been a peck on the cheek,” he recalled with a big smile. “Her name was Jade White. She lived up the road from my grandma’s place. My grandma used to look after us after school.”

In the movie, Chris gets to plant a kiss on Kristen Stewart, who is Snow White to his Huntsman. “She’s fantastic,” he said of the “Twilight” actress. “She had a really strong opinion of where she wanted to take the character and who the character was. She was very enthusiastic. She set the tone and led the charge. It was great. We had a lot of fun.”

He said the big success of the “Twilight” movies had not affected Kristen at all. “Kristen was introduced on such a big scale and in a franchise setting,” he commented. “Often, that overshadows everything else. She worked incredibly hard to show that acting is what she loves. With this film, she’s able to showcase that. The first thing I noticed was how headstrong and focused she was about what she wanted to achieve. There was no wavering in her commitment.”

Playing a huntsman out in the woods, Chris was determined to look convincing in the part—dirty fingernails, matted hair, and all. “You get paid to get dirty,” he quipped with a laugh. “Strange job.”

He shared his “dirty regimen”: “It took a good hour every day and through the day, constantly being splattered with dirt and bits and pieces. It was very much different from Thor who was obviously ethereal, clean, and blonde. This was the other side. We had to get on a set that was quite wet and muddy. They said, ‘Look, to match the continuity of yesterday, just roll in the mud.’ So I’d be literally rolling in the mud.”

As the interview wound down, Chris returned to the topic of parenthood: “This is certainly going to be an exciting journey that I can’t wait to get going with.”