In the witching hour with Ashley Nicole Williams 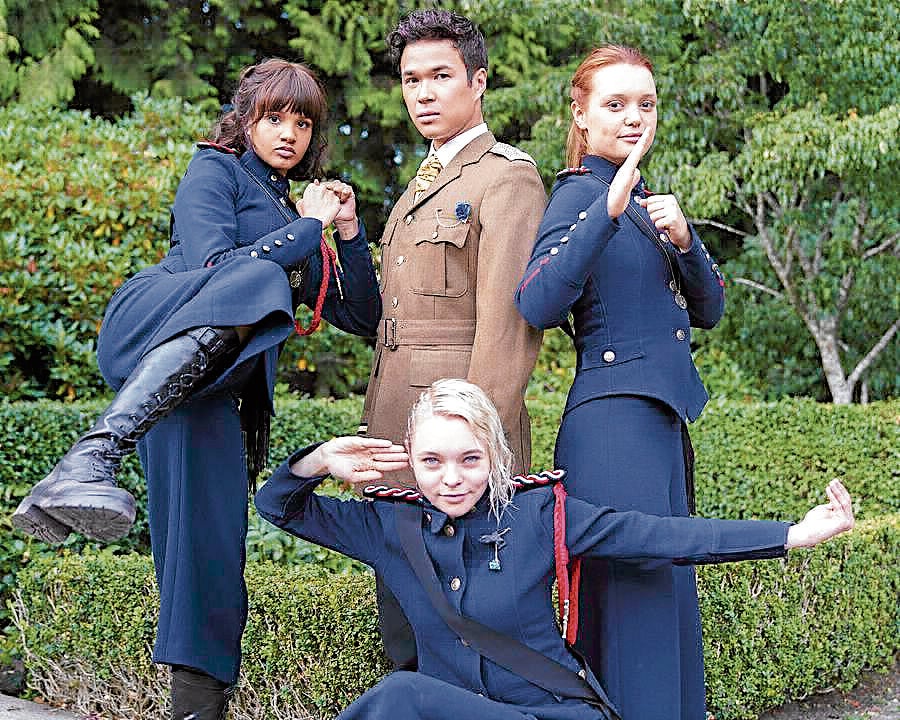 For fans of the supernatural genre, Freeform’s “Motherland: Fort Salem” has a story whose concept is simply too tantalizing to resist.

The series, whose 10-episode Season 2 launches (at 10 p.m. ET/PT) today, follows three young witches—the headstrong Raelle Collar (Taylor Hickson), the sensitive Tally Craven (Jessica Sutton) and the independent-minded Abigail Bellweather (Ashley Nicole Williams)—who are trained in both combat and magic using sound and spells before they’re deployed to a world where traditional roles of gender and power are flipped.

Three hundred years ago, the world has ended the persecution of witches during the Salem witch trials after an accord was forged.

In this parallel reality, women are the ones calling the shots. They’re either in positions of authority—like the US presidency and the military—or are thrust into the front lines of the government’s war against a terrorist organization called the Spree, run by witches who are fighting against the military conscription of their kind.

In a humdinger of a season-ender last year, General Alder (Lyne Renee) takes Raelle, Abigail and Tally on a mission to rescue the Talim witches in hiding. But when they’re attacked by the witch community’s deadly ancient enemy, the Camarilla, an organization of witch hunters that suddenly resurfaces after supposedly having been eliminated by Alder’s troops two centuries ago, the hunters use the witches’ powers against them!

While Abigail and Raele, who’s been stabbed, are left behind as Alder’s small squad flies off to safety, Tally uses her power to keep Alder from harm by taking the place of one of Alder’s biddies.

To viewers unfamiliar with this spellbinding world, biddies are witches who sacrifice their lives for Alder. They use Native American powers to “absorb” some of Alder’s years—which explains why the general is still alive and kicking and conspiring after 327 years.

This season, Raelle and Abigail’s magic training will also be intensified when they’re promoted to attend War College, where their magic, relationships and beliefs will be pushed to the limit. Meanwhile, Tally continues to cope with her “new normal” after giving up her youth to serve as one of Alder’s biddies.

We’ve recently spoken to Ashley and Jessica in separate one-on-one chats on Zoom ahead of “Motherland’s” sophomore-season premiere on Freeform (visit freeform.com) today. In the Philippines, the show’s second season debuts on Thursday at 9:45 p.m. on Blue Ant Entertainment (channels 53/196 on SkyCable; channel 120 on Cignal).

For this two-parter, we’ll focus on Ashley first.

“The stakes are very high this season because we’re dealing with a threat,” said Ashley when asked about Abigail’s challenges this season. “We haven’t really seen what the Camarilla is capable of yet. So I feel they’re a little more dangerous than the Spree.

“As for Abigail, I’d say that her theme this season is vengeance. She wants to avenge the death of her cousin Charvel (Bernadette Beck). Also, I feel like she’s discovering who she is at this point, and how she can add value to the military. It’s a big journey for her.”

We told Ashley how intrigued we were by the idea of women lording it over men in this unique world. Does she think the world would be a better place if it were indeed being run by women?

“Just like what Beyonce told you, we run the world—girls!” the 22-year-old actress quipped, laughing. “This is a hard question and I’m just quoting all these songs right now. I feel like [while] it’s a man’s world, it would be worth nothing without women or girls around.”

Incidentally, we had our chat with Ashley between 2 a.m. and 3 a.m., often regarded by the Western Christian tradition to be the “witching hour”—how appropriate!

Here are excerpts from our Q&A with Ashley, who we think has one of Tinseltown’s loveliest faces:

“Motherland: Fort Salem” tells the story of three witches trying to harness their power for the greater good. In your view, what is the series about and what does it say about gender politics?

In the show, we use our voices as our superpower. But a major thing about it is letting every woman know that she can use her voice [in the world she lives in]. It’s also telling all the men in the world that they can’t shut us up! That was the main thing that I wanted women to know from Season 1—that you’re powerful and strong. Don’t let anyone tell you otherwise.

Self-discovery is a big thing this season. The three girls are discovering who they are, but for Abigail, personally, [more of] her sexual side has come out—it’s important for her to branch off and be whoever she wants to be.

Because while it seems like men can get on with as many girls as they want, [if it’s the women doing that], they’ll go, like, “Yeah, high five! Oh, she’s a little promiscuous.” I just want women to be themselves. I want them to be able to explore as much as men do.

If you could have any po­wer you want, what superpower would you like to have?

I’d love to teleport, so I could be anywhere I want to be—like, if I want to go to LA right now! No. 2, I want to be able to read minds, so I don’t have to keep guessing what’s going on in a person’s head.

One of the things that continue to draw me to the show is your character’s budding relationship with Adil (Tony Giroux), a member of the nomadic Tarim witches—even if it’s a romance frowned upon by his sister Khalida (Kylee Bown). If you could give Abigail any love advice, what would you tell her?

I’d tell Abigail, “It’s OK to let your guard down and be vulnerable,” because I feel like she tries to show that hard exterior with everyone. There’s a whole other side to her that she doesn’t want everyone else to see—except when she’s with Adil.

It’s a big deal that Adil allows her to open up. He really grounds her and brings her back to reality. He makes her more human and lets her know that it’s OK to feel things.

Season 1 debuted in March last year at about the time the pandemic and the lockdowns started. How difficult was it filming Season 2?

We had PPE (personal protective equipment) and everybody was all masked up and shielded up—you couldn’t step on set without them! We had longer shooting weeks per episode. Like, for the first season, we had eight days and, for this season, we had 12 … because we couldn’t be on set longer than 10 hours because of COVID.

We were the only production in Vancouver that did not get shut down because of the pandemic, so props to our health team! Yeah, we really took all the necessary precautions.

But we could not hug or touch each other—[and that’s a bummer because] if you want to shake my hand, I’m a big hugger. So, for me, it was a little challenging to not be able to hug my girls, other than in a scene. We did what we needed to do in order to get this show done—and I’m really happy we did it the way we did.

I read somewhere that you started acting when you were 5 years old. What are your earliest recollections of working as a child actress?

My mom always tells this story: We had an open house at school and at kindergarten, where I wrote in my autobiography that I wanted to be a movie star (laughs)! So, from the age of 5, I knew what I wanted to do—I just always loved acting.

Coincidentally, I was in an after-school program that had acting classes, and it was with the No. 1 Disney Channel acting coach, so everything just fell into place. I’ve been working very, very hard since that age. So now, everything’s starting to pay off.

So, yeah, that little 5-year-old girl lit a fire under my butt (laughs)—and it’s been there ever since! INQ