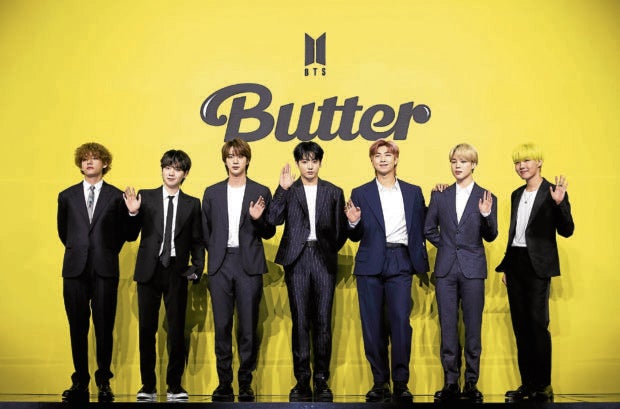 The artists: BTS. The concert: “Sowoozoo” (the Korean word for “microcosmos,” which also happens to be the title of one of the many hit songs they performed at the show). The venue: Seoul Olympic Stadium.

“Sowoozoo” is the title of the group’s muster, the culminating event for Festa 2021, the celebration of BTS’ eighth anniversary (the group celebrates its birthday every June 13).

Their previous muster (one dictionary definition reads, “a formal gathering of troops, especially for inspection, display or exercise,” which sounds about right, given the fandom’s name, ARMY) was held in 2019.

They didn’t do one in 2020 due to the pandemic and the strict government regulations that governed live events. Instead, they did a livestreamed studio show called “Bang Bang Con: The Live.”

Their next livestreamed event was “Map of the Soul ON:E,” which was a concert of a larger scale. Each experience seemed to serve to inform the group and its crew of the possibilities and limitations of livestreamed performances.

Here’s a brief disclaimer: this is my first Festa, and I’m a little overwhelmed in only the best of ways.

Festa 2021 didn’t start and end with the muster. It began at midnight on June 2 with the band dropping group (or family) photographs, then continued over the days leading up to the muster with even more content.

In no particular order, hints to the set list were dropped, behind-the-scenes video of one fun photo session with the members all dressed in soft pastels with the ideas for poses coming from the boys themselves, a YouTube drop of the last time they performed “Mikrokosmos” in concert, and finally, a conversation with all the members reflecting on the past, the present and their future.

But one thing remains consistent: their strong partnership with ARMY. This is the one thing that stood out throughout every Festa drop. I don’t think I’ve ever seen anything quite like it, and the devotion appears to go both ways.

Which leads us to “Sowoozoo.” The performances showcased many of BTS’ existing repertoire (including their two English smash hits, “Dynamite” and “Butter”), intricate and demanding choreography and amazing set and lighting design. 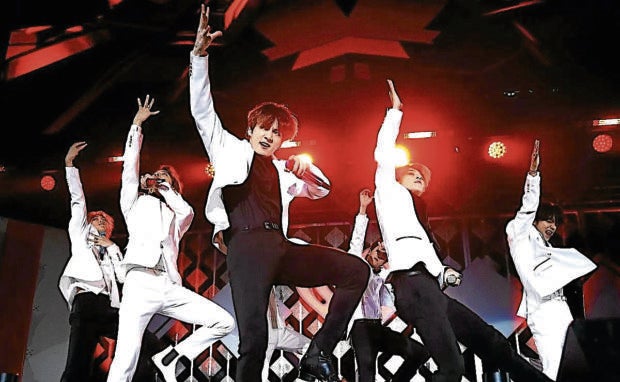 The boys in a show-stopping performance

Given the breadth of material selected from their eight-year-old discography, this show afforded everyone the opportunity to take a brief look back to see and show how far they’ve all come.

From start to finish, both performances were superb, but here are the moments that I just can’t forget:

All the interstitial films in between chunks of numbers, which seemed to tell the story of seven friends traveling through rough terrain toward a colorful and peaceful destination. For me, it may as well be an analogy for the hardships BTS has had to endure, and the beautiful place they and ARMY are in now.

They arrived onstage driven in an RV. They began singing “Life Goes On” while still aboard, all dressed for the summer in white and yellow. Once they alit, they launched right into “Butter,” then finally into the tropical mix of Dynamite.

On Day 1, towards the end of “Moving On,” RM delivered a speech in English which included the phrase “pandemic s***.” Clearly this was an indication of the group’s frustration, but he also expressed hope that they would be able to do concerts as normal again. Live events are starting to open up in certain parts of the world, so it seems they could start there in 2022.

“Daechwita,” performed on Day 1. All seven members participated, wearing costumes similar to those in the music video, including Suga, the song’s writer and producer, dressed as his alter ego Agust D. The performance was at once irreverent and hilarious, and everyone looked like they were having the time of their lives.

“Chicken Noodle Soup,” performed on Day 2. J-Hope collaborated with Becky G for this single, and it was brought to life onstage with cars, a huge dance crew and all seven members rapping not only in Korean, but in English and Spanish. VIP honors belong to Jungkook for hitting Becky G’s high notes and to RM and Jimin for deftly handling the Spanish. Becky G herself tweeted about it, totally thrilled with how it all turned out.

Water fights! On Day 1, while they were singing “So What,” it seemed as though mischief had taken over. Some of the members started dousing one another with water as the song was being performed, ending with a water battle between V and Jungkook and a mad chase all over the huge stage. The funniest part for me? Watching Suga and Jimin get out of the way, and hearing Jin’s windshield wiper laughter.

ARMY was there! On the field where the audience would normally sit or stand, there were numerous LED monitors set up showing the faces of fans waving their ARMY bombs and cheering the boys on. On Day 2, there were a lot of Pinoy ARMY that were shown onscreen! I couldn’t help but wave my own bomb and cheer when I saw them. Mabuhay kayo!

A soft place to land. To end the night, the group sang three of their more laid-back songs as encores: “Wishing on a Star,” “You Never Walk Alone” and “Mikrokosmos.” For the final song, V asked for the fans watching at home to go to a window, turn on their smartphone’s flashlight and point it to the sky. After the song ended, they boarded the RV and drove off while fireworks illuminated the night.

Following that final curtain call, I chatted with a couple of ARMY friends to gush about the muster. From its high production value and the outfits to the repertoire and performances, we were all abuzz, thanks to the glorious nights we all just shared.

Sure, we were all separated from one another, but for a few hours over the last two days, we held hands, sang along, danced, laughed, cried and cheered. We all hope that there will come a time when we’ll actually be able to attend a BTS concert in person, and cheer the boys and one another with ARMY bombs in hand and smiles on our faces.

Happy Eighth Anniversary and thank you for the fantastic Festa! Borahae!

Hidilyn Diaz: What I know is West Philippine Sea is ours