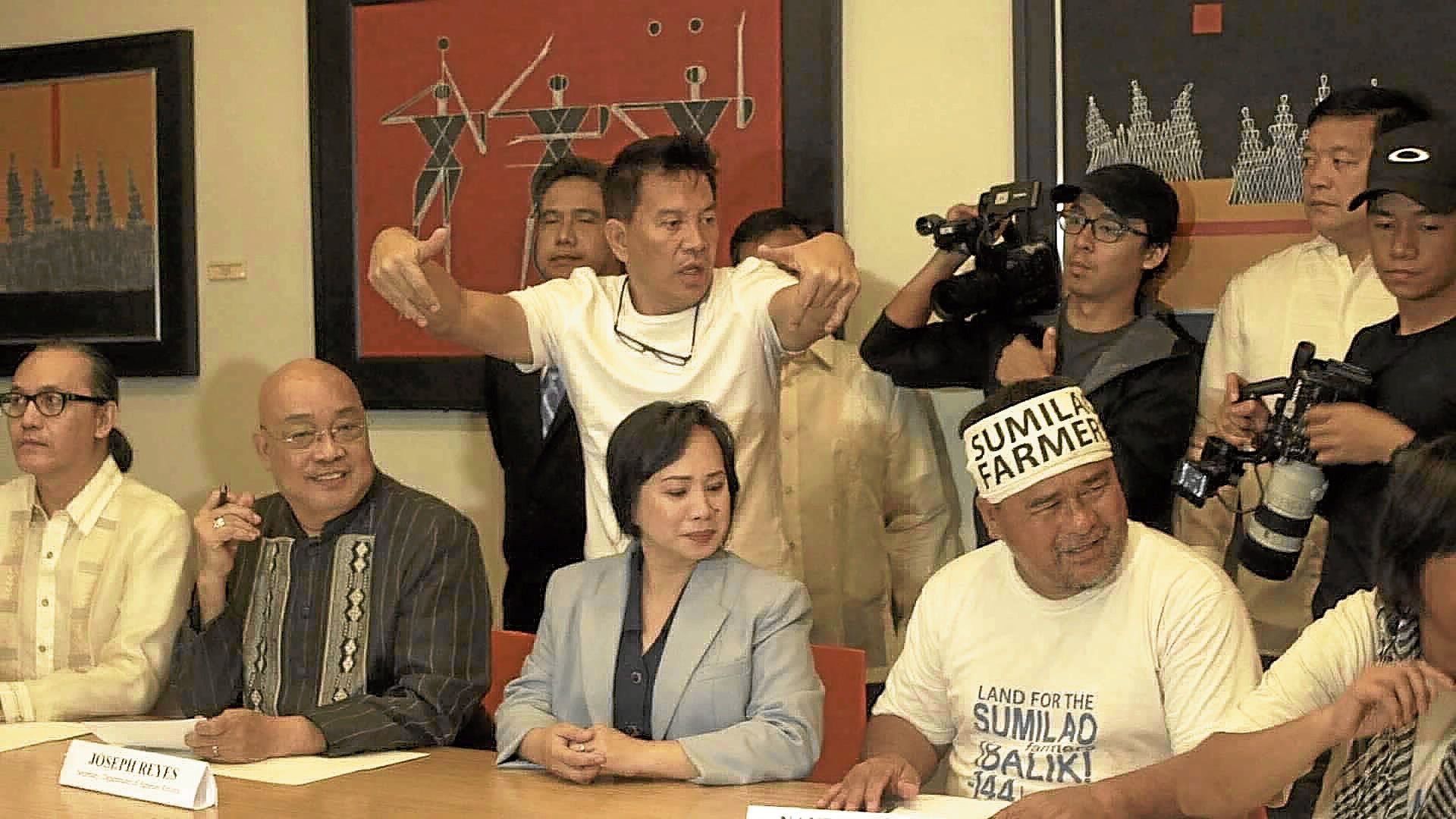 The author (standing, center) on the set of one of his films

Every June, we celebrate our nation’s independence, paid for by the sacrifices and blood of our people. There may be disputes regarding the correct dates and who deserves the label “hero,” but many did serve in different ways so that we may be able to rise and exercise our freedoms. Today, we still need to free ourselves from the effects of the present crisis, and the issues that continually hold us captive.

In our history, there is Jose Rizal—called a propagandist for his writings like “Noli Me Tangere” and “El Filibusterismo”—two novels that seem to have different messages. In the former, he appeared to favor patience; while the latter seemed to advocate an explosion. In the wars that came after, his name was used by contending powers for their cause.

Propaganda comes from all sides—for or against, spread by groups and individuals. It can be intentionally circulating various types of information—manipulated or twisted, truths or falsehoods—through photographs, newspapers, television, social media and gossip, with the purpose of directing people to think a certain way about an issue or a personality. Film is one of the most favored mediums by any side.

The word propaganda was said to be used first by clerics and later gained a political connotation, but we cannot pinpoint the moment when people decided to disseminate information that benefited them or their beliefs, for when you think of it, we often want to project an image of ourselves as better and more righteous than we really are, for we have egos to satisfy, and prestige to acquire. But first, we must influence to be believed.

Film as a weapon

Propaganda materials like films are used and abused by people to campaign and promote—they appeal to our desires and ideals; we like to rally around personalities who seem to represent us, though we don’t know them and they don’t know us. As I speak, politician-related films are being made, because the elections are near. Many in the industry are involved in it, free or paid. Films were made for or against characters in the past administrations or religions. Films were made not against the state itself, but against politicos, especially during martial law; and some were banned locally and had to be shown abroad. Were the filmmakers behind them propagandists or not?

A film, like talent, can be a weapon for good or evil. Factions lambast films that don’t adhere to their beliefs; they themselves rarely accept criticism of their own that pushes their agenda.

Not that it always works, but kingdoms have risen and fallen over propaganda. In our country alone, our people have been repeatedly conned into voting for unfaithful leaders, who keep them trapped in the cycle of hardship through the use of propaganda and well-funded machines.

It does not follow that these groups actually live by what they profess—may mga taong iba ang ipinaglalaban kaysa sa isinasabuhay. I myself have had my share of disappointments, realizing that some people I respected actually lived differently from what they claimed to fight for. Or there’s a disconnect between their thinking and what is happening. We can’t properly fight for people we don’t understand or have no genuine sympathy for. Propaganda is, in a way, a form of disconnect—to compel people to believe what would not make sense to functioning minds.

In many countries films are usually supported by the state, regardless of who an artist is affiliated with. It is not questioned.

Here, we have few film funding institutions, but we may beg and borrow from public and private entities. At times, we receive fund from government institutions like FDCP (Film Development Council of the Philippines), though I currently seem to hold the title of “state propagandist filmmaker.”

It makes me smile, for oddly, I was never bestowed that tag before, even though I also worked with past administrations. In any case, being labeled wrongly by the uninformed is common, and those who deserve our respect won’t judge without facts.

Now, we must look at the content and purpose of a film before labeling it propaganda. Support by the government or other groups does not automatically make a film such. Creating a film paid by other people does not mean one automatically advocates the message or creed of those behind it, but in my opinion—pro or anti—we must draw the line between receiving support and these supporters influencing us to change our narrative in favor of their ideology.

A creator should be responsible for his own work, though working with various groups is part of a filmmaker’s life. My films “Serbis” and “Taklub” were aided by past administrations. Before “Thy Womb,” I was about to do another film until someone from that administration invited me to look for stories in Tawi-Tawi—which is something I don’t regret. “Ma’ Rosa,” which was not FDCP-funded, was produced before this administration; “Amo” was made for television; the state had no say in it. “Mindanao,” reviled by certain government aid recipients as my most prominent state propaganda film, was assisted by the PCOO (Presidential Communications Operations Office), DOH (Department of Health), DND (Department of National Defense) and AFP (Armed Forces of the Philippines)—for we asked for it. After all, we can play with time and distance, but we can’t ask the audience to just imagine helicopters onscreen. These three films were called propaganda by those who refuse to notice their real messages. It’s rare to have an artist who does not need anybody’s help.

While setting boundaries, I work with what is there, to show people my issues, with the idea that we don’t have to work against each other to serve society. When my films are viewed by the police, they either think “I am guilty” or “I obey the law.”

My art can be too forthright as warnings to government institutions and persons about what not to be—yet, they are viewed as state propaganda. But it’s satisfying when your message is placed directly before the right people, for that’s how you spark change.

If a creator cannot resist pressure from others, or permits his art to be misused, that’s on him. There’s a difference between showing truth, and forcing a belief on others. People jump on bandwagons—but if you’re a filmmaker who harasses your actors and you suddenly begin to cry about injustice when you take money from groups with vested interest to make a film, then your work is propaganda. Many rail against society’s ills, yet spit on the poor in private.

Artists are expected to go against the tide as it is expected of the youth to be idealistic. An embarrassing confession on my youthful idealism: I ran to Edsa in 1986; the mood was hopeful, but for all my fire, I was sent home to bathe in vinegar by a higad who decided to crawl inside my clothes—and I scratched all the way to Pampanga.

Did I love my country any less? No, though I was not mature enough. But it made me realize that many of us cannot always be trusted to prioritize nonpersonal needs, and will often relieve physical distress before fighting for pure principles.

I’ve learned from that and trained myself to endure discomfort better; even my art stirs unease, although it’s necessary. Maybe the need to escape to comfort is the reason we remained colonized for centuries; we often have to be forced out of our comfort zones before we decide to tackle our troubles.

Whichever side we belong to, let us examine ourselves. We express our beliefs differently—and fight differently. We must never belittle the efforts of those who act for what is right; but our methods toward a goal vary. What matters is that we are effective in serving good causes. As filmmakers, let us be of use, but avoid allowing ourselves to be controlled by the unscrupulous. We must try to be truthful in telling our story regardless of who is in power, and who our connections are.

We are in the same battle—and as in the past, some are better at using the pen, while others use art. Some provide food, others heal the wounded. There is evil everywhere, but while we may be flawed, and our paths and means may be different, many of us aspire and work for the same things—stability, justice and equality.