WATCH: 10-year-old Filipino boy wows in 'America's Got Talent' with 'All by Myself' | Inquirer Entertainment

WATCH: 10-year-old Filipino boy wows in ‘America’s Got Talent’ with ‘All by Myself’ 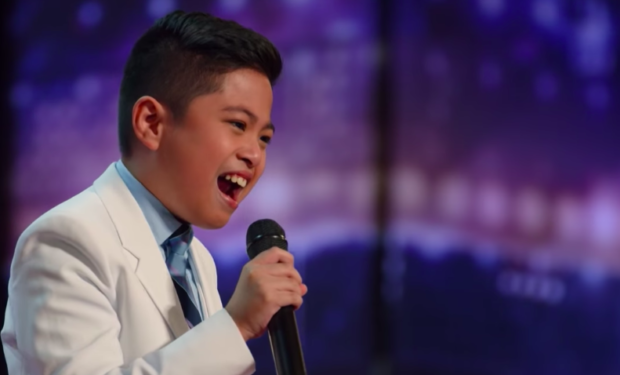 Peter Rosalita performs “All by Myself” in “America’s Got Talent.” Image: screengrab from Facebook/@AGTVegasLive

A 10-year-old Filipino boy born in Dubai dominated in the 16th season premiere of “America’s Got Talent” (AGT) after delivering a powerful performance of “All by Myself.”

Peter Rosalita’s rendition of the classic hit garnered a standing ovation and praises from all four judges in the talent competition, as seen in the clip shared on the official Facebook page of America’s Got Talent Live yesterday, June 2.

“No chance Peter Rosalita will be by himself after that performance!” the page said.

Aside from his talent, however, the judges seemed to have liked Rosalita even before he started singing due to his joyful and confident personality.

When asked what he will do with the $1 million if he wins, Rosalita answered that he would buy a Nintendo Switch console and a laptop for his online schooling.

No chance Peter Rosalita will be by himself after that performance! #AGT

Posted by America’s Got Talent Live on Tuesday, June 1, 2021

Similar to Celine Dion’s cover of the Eric Carmen song, the white suit-clad Rosalita flawlessly nailed the high notes, leaving the judges in a visible yet pleasant shock as the audience cheered him on.

Despite his wonderful performance, Rosalita admitted that he was nervous, to which panelist Sofia Vergara replied: “We were so nervous too, but we loved you!”

“You’re so cute, even when you talk to us,” Mandel continued. Rosalita then cheekily replied, “Everyone says that I’m cute.”

Heidi Klum, meanwhile, noted,  “Mariah [Carey] better watch out!” as the young boy had hit the high notes without fail.

“That was an incredible audition,” Simon Cowell, for his part, noted, adding that there were times in the performance that gave him goosebumps.

“You have an amazing voice, an amazing personality, an amazing energy. Everyone is gonna fall in love with you after this performance,” Cowell emphasized.

Noting that his vocals partnered with a likable personality, Cowell commented that not only the United States would love Rosalita but also the world.

Rosalita unsurprisingly gained a yes from all four judges and is set to advance further in the competition. AGT airs on NBC in the US every Tuesday night (Wednesday in the Philippines).  /ra