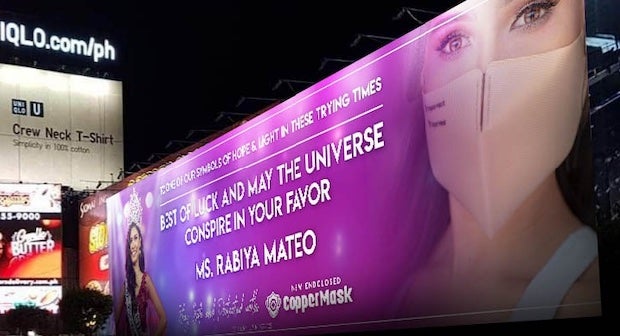 “A symbol of courage and strength of an independent woman” — that was how her costume was described during the competition.

Filipino fans enthusiastically showed their support for Rabiya Mateo on Monday, May 17, during the 69th Miss Universe 2020 coronation.

CopperMask Philippines was among the millions of supporters who showed their love for Rabiya, showing its support with the launching of its newest billboard at Edsa Orense.

The billboard bears this message:

“To one of our symbols of hope & light in these trying times.

Best of luck and may the universe conspire in your favor, Ms. Rabiya Mateo.”

CopperMask Philippines has given its full support for the Ilongga beauty queen since the start of her Miss Universe journey. 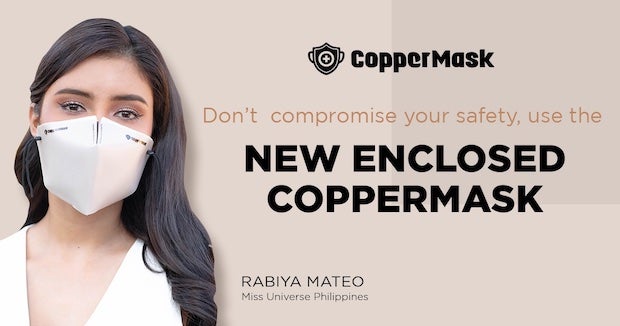 Wearing a mask is the ultimate expression of bayanihan and malasakit during this pandemic.

CopperMask Philippines is the first and 100% guaranteed original CopperMask in the market. It is made from infused copper strands and it provides a blocking defense that helps keep respiratory droplets from spreading.

CopperMask is reusable and washable for up to 30 days. The redesigned CopperMask includes no-hole “enclosed” protection filter, which is washable and can be used up to three times. This new filter helps protect the user by blocking most infectious droplets. It also has a validation card to ensure customers purchase the original mask.

Rabiya Mateo, though very positive and aiming to bring home the fifth Miss Universe crown for the country, managed to get only into the top 21 o Monday.

But as she said in one of her interviews: “I may or may not win the crown. But one thing is for sure: I’m going to make Filipinos proud.” 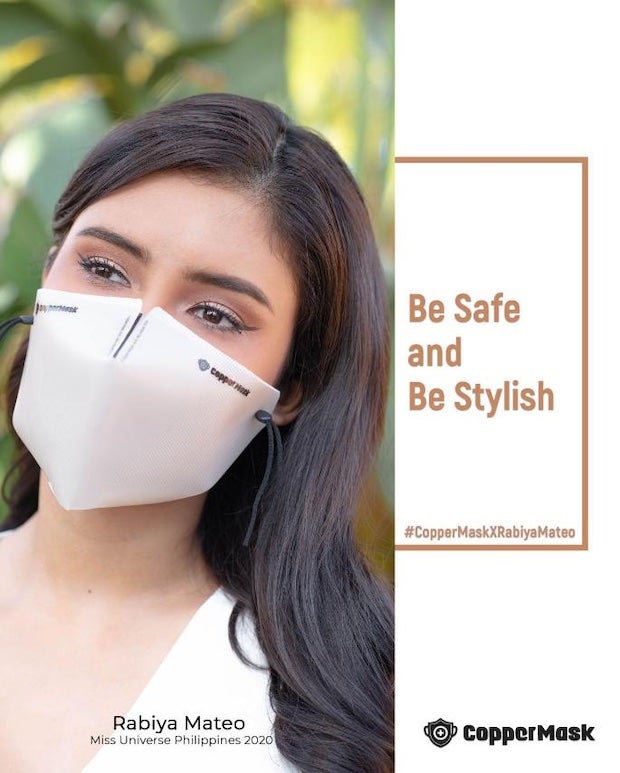 Be safe and stylish just like beuaty queen Rabiya Mateo.

Read Next
LOOK: Dawn Zulueta gorgeous in new cut and gray hair, ‘coz there’s ‘no better colorist than Mother Nature’
EDITORS' PICK
Behind Terance Mann’s 39, Clippers oust Jazz in Game 6
Smart celebrates all kinds of ‘#SimplyLove’ for Pride Month
Smart brings KCON:TACT especially 4U to subscribers from June 19 to 27
WATCH: INQside Look with Fil-Am actress Aina Dumlao
SWS: Over 12M Filipinos still jobless as of May 2021
Gilas out to prove Korea win not a fluke; Tab fires back at ‘lucky shot’ remark
MOST READ
Underdog Dasmariñas vows to fight to the death vs Inoue
Dizon: 40 of 119 ‘Build’ projects done by 2022
South Korea rips Thailand ahead of Gilas rematch
Rajko Toroman praises, warns Gilas Pilipinas
Don't miss out on the latest news and information.