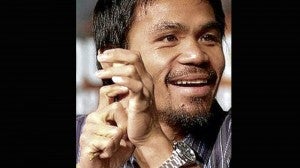 Pacquiao was ahead of Floyd Mayweather Jr. who landed at No. 52.

“The Celebrity 100” is an annual list compiled and published by Forbes magazine of the year’s 100 most powerful celebrities based on entertainment-related earnings, media visibility and social media popularity. It covers film and television actors, television personalities, models, athletes, authors, musicians and comedians, Forbes said.

Lopez, who rose through the entertainment world ranks from her humble birthplace of the Bronx, New York, surprisingly jumped from 50th place on last year’s list.

Forbes estimated Lopez’ earnings in the past 12 months at $52 million, and her top ranking is powered by her lucrative gig as a judge on the popular television show “American Idol,” a new clothing line at Kohl’s, a top-selling fragrance and millions of Twitter and Facebook followers. She also just announced her first upcoming world tour, joined by Enrique Iglesias.

Winfrey, who has admitted struggling with her OWN TV network after ending “The Oprah Winfrey Show” syndicated TV chat show last year after 25 years, kept her No. 2 slot from last year, earning an estimated $165 million.

Pop star Rihanna landed on the list for the first time with estimated earnings of $53 million due to hits in the past year such as “We Found Love,” and “Talk That Talk,” while also landing lucrative endorsement deals with the likes of Nivea and Vita Coco, Forbes said.

Dropping four places from last year, Lady Gaga was ranked No. 5, earning $52 million, while new “The X Factor” judge Britney Spears returned to the list after a one-year hiatus landing at No. 6, earning an estimated $58 million helped by a successful tour.

Kim Kardashian was also a notable newcomer at No. 7. She earned $18 million—the lowest amount in the top 10—but attracted ample media attention for her splashy wedding and divorce. Pop singer Katy Perry landed at No. 8.

Rounding off the top 10 was Tom Cruise at No. 9 with the comeback success of his “Mission: Impossible—Ghost Protocol” movie that earned nearly $700 million at the global box office, and Steven Spielberg’s various ventures in TV and movies earned him an estimated $130 million to place him at No. 10.

Sheen out, Kutcher in

British singer Adele entered the list at No. 24 after a record-equaling six Grammy haul and returning to live performing after surgery on her vocal chords. Among big names to drop off the list was Charlie Sheen after his “Two and a Half Men” exit. His replacement on the show, Ashton Kutcher debuted on the list at No. 51.

The full list can be viewed at www.forbes.com/celebs. Source: Forbes Magazine, with reports from Ana Roa, Inquirer Research, Reuters and Matikas Santos