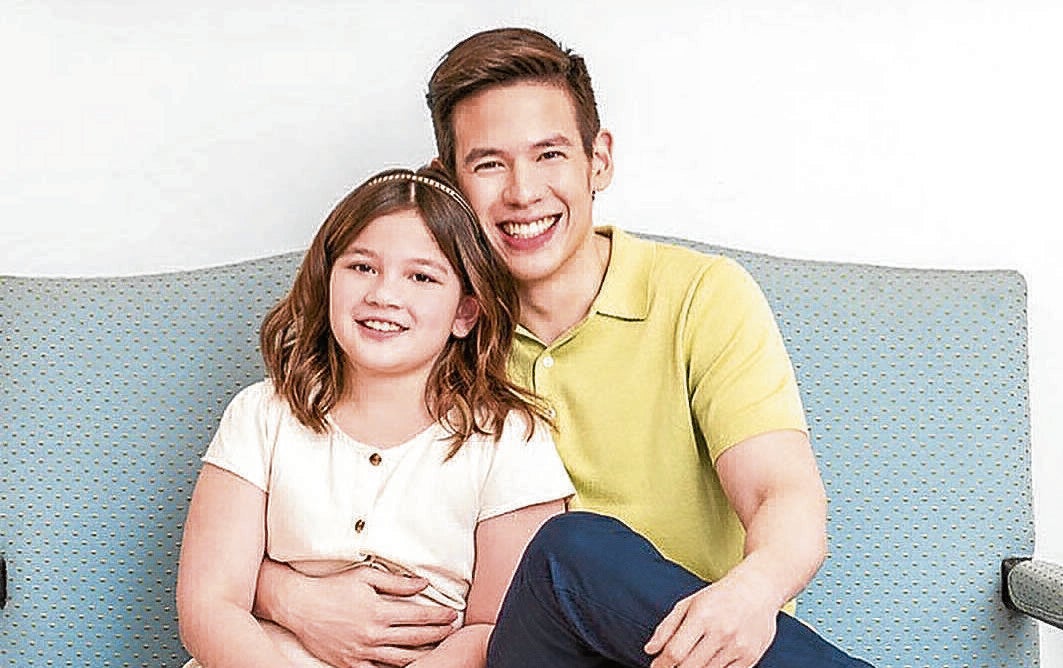 We’re in a really exciting phase in our relationship,” declared actor Jake Ejercito, who wasn’t talking about an existing romantic connection with a woman, but about his relationship with 9-year-old daughter Adrianna Gabrielle, or Ellie.

“She’s no longer a baby, but she’s not yet a teenager. She is slowly starting to be her own person, to have her own mind. She already knows what she wants. You can’t just dictate to her what to do anymore,” said the proud father during a recent virtual media conference to announce his being the newest talent of ABS-CBN.

Ellie is Jake’s daughter with actress Andi Eigenmann, who is currently based in Siargao province with her partner Philmar Alipayo and their two kids.

“I became a dad at age 21. It really changed my life. It’s been a 180-degree turn for me,” said Jake. “It’s been a fulfilling journey so far.”When it came to joining show biz and the possibility of being paired with different actresses, Jake said he is confident that he wouldn’t have a problem making Ellie understand his work. “She’s old enough to understand now. Her mom is also in the same industry. It’s just funny when I did a variety show last year. Ellie would see me sing and dance, and she would laugh at her dad,” said Jake, who was one of the hosts of the now-defunct “Sunday Noontime Live” on TV5.

As to whether Ellie is already signifying interest in joining show business like her parents, Jake replied: “Ellie has long been exposed to the industry because of Andi. They’ve had a lot of magazine shoots already. I say she’s comfortable being in front of the camera. If ever she decides to go into show biz, I’ll be rooting for her 110 percent,” Jake said.

Will Jake be willing to work with ex-girlfriend Andi in the future? “When the opportunity arises, why not? That will most likely be a heavy drama since Andi was tagged as the heiress of drama when she did ‘Agua Bendita,’ right? It would also be a huge honor to work with Ma’am Jaclyn (Jose, Andi’s mom), Cannes best actress, the one and only.”

Jake will be part of the upcoming teleserye “Marry Me, Marry You,” which also features Paulo Avelino and Janine Gutierrez as lead stars.

Growing up with parents who are public figures, Jake said, he has learned to deal with bashers. His dad is former President Joseph Estrada, while his mom is former actress Laarni Enriquez.

“With regard to bashing, I was born … [when] our dad was a senator. While growing up, he was the vice president, until he became president. With what happened to his political career, my siblings and I already got used to bashings. It’s been a part of our lives. In fact, I got bullied in school. We went through all these things so there isn’t anything that we can’t handle,” Jake recalled. “Just like what that famous quote said, ‘Learn the art of ‘deadma.’”

Jake was referring to that time in 2017 when he was romantically linked to GMA 7 artist Maine Mendoza, who was then part of the phenomenally popular onscreen partnership with Alden Richards called “AlDub.”

The other “episode” was in 2019 when he was linked to actress Bea Alonzo. “I just attended her birthday party as a plus one. That’s also the first time I’ve met her, even though I’ve always been a super fan of ‘One More Chance’ (Bea’s movie with John Lloyd Cruz). I posted something about that meeting on my IG story. That’s just it,” he explained.

As to whether he is dating anyone at the moment, Jake said he has been single for the past five years. “I chose to focus on parenting,” he declared. “Dating during the pandemic is difficult. There’s no chance to go out and meet new people.”

It was also because of the pandemic that it took Jake over a year to finally ink the deal with ABS-CBN to become a Kapamilya talent. “It had been a long process. I actually met with the bosses just a few days before the first lockdown in March 2020. I had a meeting with Tita Cory (Vidanes, chief operating officer) and Sir Deo (Endrinal, Dreamscape business unit head) with the understanding that I would already be signing as a Kapamilya,” said Jake. “Because of what happened last year with the pandemic and the network shutdown, negotiations got stalled. Everyone just waited for everything to settle down.”

When he got the offer to do “Marry Me, Marry You,” and he saw the cast members he would be working with, Jake said, “the feeling had been overwhelming and nerve-wracking at the same time.”Jake, who took up business administration and international management in London, added: “I’ve done a bit of acting before. I was very reluctant then. The opportunities then were also few and far between because I was away for three to four years. This time, I’ll be working as an actor full-time, with my fingers crossed. Last year, when I did the movie ‘Coming Home,’ I realized that I wanted to give acting a try. Doing that film helped me decide.”

In “Marry Me, Marry You,” Jake plays Cedric, who is the childhood best friend of Paulo’s character, and the vice president of the latter’s company. “Cedric is Paulo’s right-hand man. Paulo often talks to Cedric about both his personal problems and professional life. Sadly, that’s all I can share with you about my role for now,” declared Jake.

Lock-in taping for the program will start in two weeks’ time, so Jake is currently preparing for it. “I already told Ellie that I’ll be away for three weeks. It’s actually exciting for me because from among the cast, I only know Adrian Lindayag. It will be my first time meeting everyone else,” the actor said.

Being Erap’s son, Jake said he knew that he has some big shoes to fill. “Before he became a public servant, my father was an actor so being compared to him is inevitable. When you come to think of it, he was the very first Famas hall of fame awardee. My mom also made an impact on television before. Both my parents told me to leave this at the door. ‘Don’t think about it too much,’ they said, ‘Just do you,’” Jake shared with reporters.