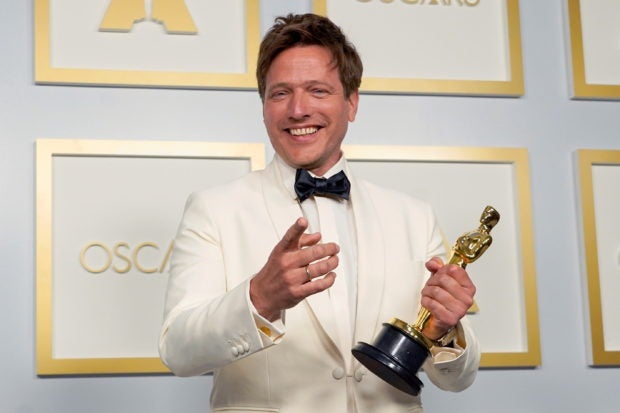 Thomas Vinterberg from Denmark poses with the award for best international feature film for “Another Round” in the press room at the Oscars in Los Angeles, California, U.S., April 25, 2021. Image: Reuters/Chris Pizzello/pool

Danish Oscar-winning comedy-drama “Another Round” has found a global audience because it celebrates life at a time when the pandemic has threatened our existence, according to director Thomas Vinterberg.

“I find that alcohol in the movie is a symbol for something larger than just drinking,” Vinterberg, 51, told Reuters in an interview.

“Our existence has been threatened by the pandemic, but there’s an element of rejoicing in this movie, with people sharing bottles, hugging and celebrating life. I think there’s been an enormous desire towards the uncontrollable,” he said.

“I guess it’s about putting yourself at risk… getting out of your safety zone a little bit,” Vinterberg added.

Mikkelsen, whose character finds a brief boost and enlightenment from drinking, performs an extended drunken dance at the end of the film and is frozen in time in the final scene as he throws himself off a wharf in Copenhagen.

“Some people think he’s flying in the end scene, and others perceive that he’s falling,” Vinterberg said.

“To me, the ending carries an element of ecstasy, the element of weightlessness, but it also carries the grief of the character having lost his best friend.”

In his acceptance speech on Sunday, Vinterberg dedicated the Academy Award to his late daughter Ida, 19, who was to have had a role in the film but was killed in an automobile accident.

“When my daughter died four days into shooting this film, a free fall began towards insanity,” he said in the interview.

“Continuing with this movie was filled with a little bit of purpose, if we made the movie for her, a purpose of honoring her memory,” he said.

“What happened yesterday (on Sunday) was the ultimate way of raising a monument for my daughter. It was filled with a lot of emotion because I miss her, but it was also filled with satisfaction.” JB

Denmark’s ‘Another Round’ wins Oscar for best international feature film