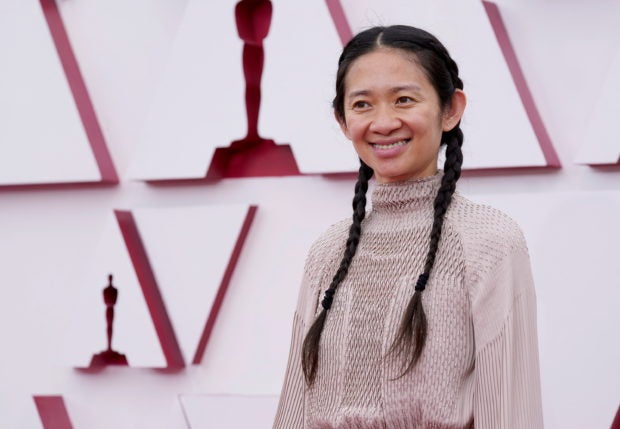 It was the first Oscar for Zhao, 39, who featured real-life nomads alongside actress Frances McDormand to show the lives of older Americans who travel from job to job to try and scrape together a living.

Zhao was born in China and lived in Beijing until age 14, when she went to boarding school in London and later finished high school in Los Angeles.

After attending film school in New York, Zhao won acclaim for independent movies “Songs My Brothers Taught Me,” about the bond between a Native American brother and sister, and “The Rider,” the story of a young cowboy recovering from a serious head injury.

Just two women have won best director in the 93-year history of the Academy Awards. Kathryn Bigelow took the prize in 2010 for war thriller “The Hurt Locker.”

Zhao competed this year against “Promising Young Woman” director Emerald Fennell, marking the first time two women were nominated in the category at the same time.

She went into the Oscars ceremony as the front-runner after picking up trophies from the Directors Guild of America, the Golden Globes, BAFTA and multiple film critics groups.

Other contenders, in addition to Fennell, were David Fincher for “Mank,” Lee Isaac Chung for “Minari,” and Thomas Vinterberg for “Another Round.”