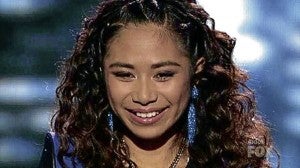 In a radio interview in Malacañang, Aquino said he was “very happy” to know that Jessica Sanchez has survived elimination and was now in the Top Three of the hit TV show. The talent show airs the finale next week.

“Of course, you’d be happy that she’s one of the top three. And the support that she’s getting from the communities that are eagerly watching her, wish her well,” Mr. Aquino said.

“Hopefully, she really reaches the top,” he added.

Malacañang over the weekend expressed confidence that Sanchez would be the next American Idol, because of the momentum she has gained and the overwhelming support of her fans.

“We’re in the final three and we really are hoping for the best. We are wishing her the best of luck in this final stretch and we hope that the next American Idol would be Jessica Sanchez,” Valte said.

Sanchez was born and raised in Chula Vista, California. Her mother, Editha, is a Filipina who traces her roots to Bataan. Her father, Gilbert, on the other hand is a Mexican-American who serves in the US Navy.