Vilma: Nora and I are too old for intrigues 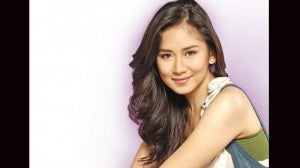 It was such a delight to chat with topnotch actress and Batangas governor Vilma Santos in her office. She’s ever so warm and accommodating. Had she seen Nora Aunor since Ate Guy’s homecoming? “Unfortunately not,” Ate Vi said.

“But if a good offer came along, I’d be more than willing to work with her,” she added.

Was she wary that her movie, “The Healing,” might be pitted against Nora’s “Thy Womb”?

“The competition will always be there,” Ate Vi quipped. “It’s good for both of us. Pero please, ’wag n’yo na kami intrigahin ni Guy. We’re too old for that.”

Amid her frenzied schedule, Ate Vi makes time for motherhood. “Even if [my son] Luis and I are both busy, we check up on each other daily,” she said. “Kahit si Jennylyn (Luis’ girlfriend) open ang communication namin. I like her for Luis, but of course it’s up to him to decide if she’s the one. [My other son] Ryan is also showing interest in show biz, but I’m discouraging him until he finishes his studies. He looks up to his kuya.

Ate Vi also revealed that her two sons have an inclination to join politics, just like she did. “But I told them that right timing is important.”

Was she more fulfilled as an actress or as a public servant? “More than half of my life, I have been in show biz. I’m sure nung una, binoto ako dahil ako si Vilma Santos,” she pointed out. Pero hindi pwedeng puro pangalan. Sa show biz, big screen yan. I get to entertain my audience. As a public servant, realidad yan. Walang take two.”

The Star For All Seasons will celebrate her golden year in show biz this November. At the rate she’s going, Ate Vi still has so much to give and share. The fab old-timer keeps a certain newness burning in her craft.

Not on a date

Since Vicki Belo and Hayden Kho were spotted having dinner at The Fort recently, does that mean they have reconciled?

“They were not on a date,” my source clarifies. “They were with 10 other people for a meeting about the opening party of the Belo branch on High Street. “Hayden is resuming his show biz career and his cologne line, which is selling well and has partnered with Ever Bilena. Vicki attended the US premiere of ‘The Road’ alone.”

Vicki and Hayden may not be back in each other’s arms, but they will never be out of each other’s lives; the memories linger and the friendship stays.

A word from Sally Quizon

I bumped into Sally Quizon at Foamy Brews in Home Depot one Saturday. She said she sees her dad Dolphy (who fondly calls her Salud) daily.

Tito Dolphy is still in high spirits, so there’s no way he would turn into a spirit anytime soon.

Sarah Geronimo is gearing up for her birthday show, dubbed “24/SG,” on July 7 at the Smart Araneta Coliseum. She wants to show her fans something they’ve never seen her do. She has filled up the Big Dome and is raring to outdo herself when she turns a year Bolder!