Tom and Carla plan ‘small, intimate’ wedding at end of the year 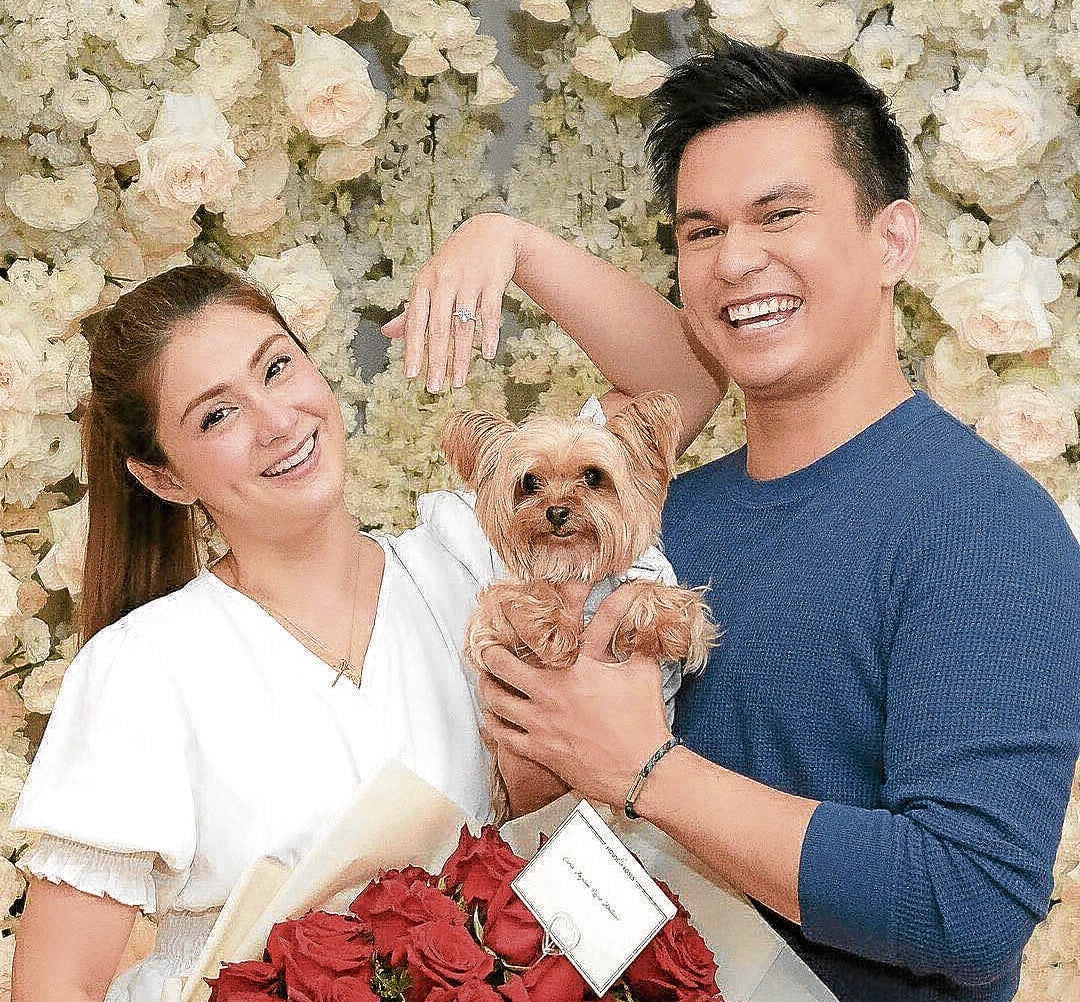 Tom Rodriguez has long known that Carla Abellana is the right one for him—the person he would like to spend the rest of his life with. And he knew in his heart that she would say yes when he finally asks her hand for marriage.

But still he got nervous on the day he popped the question.

“My knees were shaking and my legs felt like jelly. I was 100 percent sure that she was going to say ‘yes’. But I was nervous. What if Carla catches on my plan? There was still that uncertainty … what if she says no all of a sudden?’” Tom told the Inquirer in a recent online conference.

The proposal happened at the home of Carla’s mother, which was decked out in a “dreamy” arrangement of white flowers and candles.

“Someone welcomed us on the door to help us with our things. That was when they secretly gave me the ring. I then led her to the house. I was shocked myself because I had only seen that setup in photos. But I tried to stay calm, like it was a normal day,” he related.

‘Why all the flowers?’

An unsuspecting Carla, at that moment, thought that there was a party. “There was a photographer, a videographer, my family, some unfamiliar faces,” she related. “Why all the flowers? I wasn’t sure what was happening.”

And then it hit her. “It was a mix of emotions when I realized that Tom was proposing. And for a while, I just found myself staring at the flowers and candles. I kind of spaced out. I couldn’t actually make out what Tom was saying in his speech,” Carla recalled. “But when it finally sank in, I started crying.”

Tom was also lost for words. “I didn’t even hear her answer. I told her, ‘you haven’t even said yes yet.’ And she said, ‘Nag-yes na ako!” he said, laughing. “I was also just staring at her. It was a surreal moment.”

The surprise took two weeks to prepare; the relationship, six years. And while Tom had thought about proposing to her earlier, his worries, he admitted, always got the best of him.

“The fears and anxiety would get in the way—and this was prior to the COVID-19 pandemic. And now those anxieties are at an all-time high,” Tom said. “It (proposal) was one of the most lucid moments of my life. My fears and anxiety were lifted.”

One of his realizations is that “you can’t always wait for what you think is the right time” when it comes to marriage. “As soon as you feel it, act on it, especially if you have been together for many years,” he pointed out.

It all took place last October. However, the show biz couple decided to make it public only last March 21 with matching posts on Instagram.

Asked why they had to wait five months before making their engagement public, Carla said she and Tom wanted to cherish the moment first, before sharing it with everyone else.

“We wanted to enjoy it ourselves first with our family and close friends. We made the most of our time,” Carla said, adding that she and Tom had a difficult time keeping the news to themselves. “Tita Coney (Reyes, Carla’s costar in the recently concluded soap ‘Love of My Life’) was one of the few ones who knew about it.”

The couple was also wary about sharing the good news, because they thought it could come across as insensitive.

“We wanted to be sensitive and wait when everything is OK. But then it all goes back to that lesson about waiting for the right time that may not come. We decided to share it with people because they might find out eventually, and we don’t want them to feel like we’re keeping it from them. We also owe that respect to the people who support us,” Tom said.

The wedding, if all goes well, will be at the end of the year. But it will be a challenge, the couple admitted.

“It’s hard to plan because the protocols are changing every time,” Carla said. “It will likely be small and intimate because gatherings should be kept small.”

The COVID-19 pandemic tested their relationship. But there were also a lot of discoveries while living together.

“She does the laundry, she manages everything [at home],” Tom told the YouTube talk show GTalk TV. “She’s so organized and I’m in awe of that, because I’m the opposite!”

Tom has also learned to find beauty in the most mundane things that people tend to overlook or take for granted, say watching television while cuddling, or simply Carla’s loving look.

“There was this look that she gave me that made my heart swell. It’s just seeing her with our dogs and her family, and it just felt so overwhelming, and I couldn’t even understand why it was happening since we have been together for over six years,” he said, as he recalled the last time Carla made him cry.