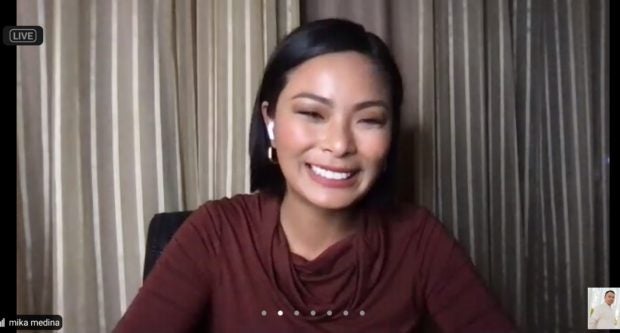 MAKATI CITY — Maxine Medina first came to national consciousness as the country’s representative to the 2016 Miss Universe pageant, as the host delegate to the global beauty contest’s 65th edition staged in the Philippines in January 2017. Since then, she has embarked on a show biz career like many other beauty queens before her have done.

In her latest TV offering, Medina is joined by fellow beauty queen Pilar Pilapil, who also represented the country in the Miss Universe pageant. The young thespian shared her experience working as a rookie “kontrabida” taking tips from the acclaimed veteran actress.

“I was terrified of her, but she told me to just relax. She guides me,” said Medina, who is portraying her first role as an antagonist in the GMA primetime series “First Yaya,” top-billed by Gabby Concepcion and Sanya Lopez.

The Binibining Pilipinas winners, crowned almost five decades apart, are teaming up in the series to make life miserable for the show’s main characters.

“We’re comrades here. But there are scenes where we also argue with each other,” Medina shared.

Not only is this her first “kontrabida” role, but this is also Medina’s first project with the Kapuso network and her first time to shoot in a production “bubble” due to the COVID-19 pandemic.

For the bubble, the cast and crew film episodes for three straight days, then take a day off before resuming another three-day filming marathon.

All cast and crew members are taken to their isolation hotel during their one-day break, to shield them all from possible infection from people not associated with the production or facilities they are using and staying in.

“Don’t they do the same in Hollywood, lock-in tapings? It also fosters a deeper bond with my fellow actors, we get to know each other more,” Medina shared

As for working in GMA, the beauty queen-turned-actress is all praises for the network’s staff. “They’re all nice, it’s so easy to work with them,” she said.

“They’re very creative. We read every scene, and gosh, they’re all well thought out! I’m proud of my directors, the entire production crew, and my co-actors,” Medina added.

Another beauty queen is in the show’s cast, 2018 Miss Eco International Thia Thomalla, who plays the role of a Presidential Security Guard staff member.

Medina said her experience as a beauty queen “toughened” her up for show biz.

“I learned how to deal with people from different walks of life. I also developed a shield for myself so I wouldn’t get hurt,” she explained.

“It also helps that I have somehow earned respect for myself,” Medina added.