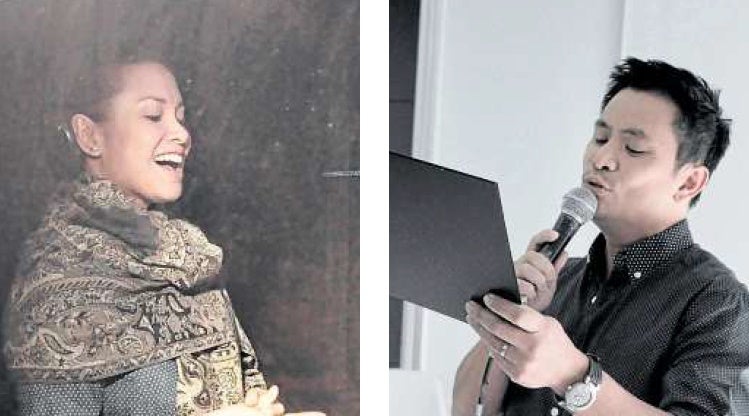 Lea Salonga (left) and Ogie Alcasid while recording the English and Filipino versions, respectively, of adoption anthem “I Love You Anak”

There are many children who deserve to be loved, cared for, and be given a chance to have a victorious and fulfilling life in spite of their circumstances.”

Singer-songwriter Ogie Alcasid said this as he took note of the sad plight of the growing number of orphaned, abandoned or neglected Filipino children in need of permanent homes, and reiterated his support for the adoption advocacy campaign of the government and child-caring agencies.

“I would encourage every parent to do their share in not only being adoptive parents, but in spreading the word that we need to see adoptive children as they really are. Like anybody else, they are God’s children,” he declared.

Ogie and multiawarded singer Lea Salonga (who is an Inquirer Entertainment columnist) sang the Filipino and English versions, respectively, of the song “I Love You Anak,” which “has become an anthem for adoption advocacy in the Philippines,” according to Inter-Country Adoption Board (ICAB) executive director Bernadette Abejo.

Whenever the Department of Social Welfare and Development and child-caring agencies like Norfil Foundation and Kaisahang Buhay Foundation (KBF) undertake an adoption program, Ogie’s version of “I Love You Anak” is sure to be played. The song was composed by McCann Worldgroup Philippines for ICAB’s adoption advocacy campaign.

“More than the words the campaign says, what it really aims to evoke is a feeling. The feeling is the message. And nothing makes us feel quite like the way music does,” said Raul Castro, McCann CEO and chair. “I have personally witnessed how adoption has added so much love and joy to the lives of both the adopted children and the adoptive parents.”

Ogie told Inquirer that he was really touched by the gesture and honored when McCann approached him to sing the Filipino version of “I Love You Anak,” saying, “The advocacy is very dear to me as I have family and friends who are adoptive parents.”

Abejo recalled that it was a teary eyed moment when she first heard the song being presented to her. “They were singing the bare version of the song with all smiles and gusto holding the presentation materials in their arms. I knew we were on to something great.”

The English version by Lea Salonga has been played in international conferences on child welfare. “To this day, I am still in awe of the fact that our national treasure Lea Salonga and Ogie Alcasid donated their time and talent for the song. I will always be grateful to Lea, Ogie and McCann for making this happen,” Abejo said.

Precious Bolla, social worker at KBF, observed that every time the song was played during activities of the recent Adoption Consciousness Celebration, people sang and danced. “‘I Love You Anak’ portrays that giving an unconditional love to a child is possible even if he or she is not related by blood.”

Teresa Nuqui, executive director of Norfil Foundation, added: “The song explains that every child is unique regardless of whether he/she is a biological or adopted child. Despite these differences, a parent will always be a parent and no matter what happens a parent will always love his/ her child.”

Ogie said that music soothes and heals. “The chorus itself says it all and really resonates with me as a parent. ‘I love you anak, I love you.’ Napakahirap maging magulang, but when you are reminded that being a parent is all about loving your child unconditionally, it makes it all worth it,” he pointed out.

Adoptive parent Monina Tan-Santiago said her favorite lines from the song are: “At kahit ‘di ko gets ang jokes mo, generation gap ang say mo. I love you, anak. I love you.”

“Adoption for me is completing a family that was once perceived as incomplete, a childless couple and a parentless child. This union is bonded by unconditional love and faith. Our daughter, Reise, is heaven sent,” she said.

At 56, Monina admitted to having a generation gap between her and Reise, who is now 11. “Our love has given both of us the patience to try to understand and learn from each other.” Reise was 6 months old when Monina and husband Chut welcomed her to their home.

As for Janet Villa, who with husband Jojo adopted Anna when she was just 10 months old, her favorite lines are: “‘Di laging magkapareho, minsan ‘di magkasundo. But I love you, anak.”

“In my case, I celebrate our daughter’s differences [with us], for these make her, her. She is not our mini-me; she is better, being her own unique and full expression as an image bearer of God,” Janet said. “Truly, love covers a multitude of differences. Adoption builds a family much like giving birth does.”

To know more about how the song has inspired many families to adopt, you can visit www.iloveyouanak.com