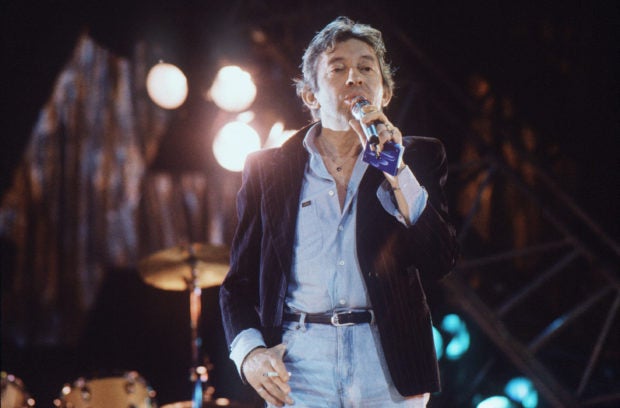 Strands of Gainsbourg’s music proved as popular in 1990s United States hip-hop — cropping up in songs by Nas, the Wu Tang Clan and Busta Rhymes — as they have with his more obvious, singer-songwriter successors of recent years.

The ball was already rolling just before his death on March 2, 1991, when De La Soul used two samples from his oeuvre for their album “De La Soul is Dead” of that year.

Gainsbourg’s wounded ennui and Gallic swoon soon cast a spell over everything from trip-hop (Massive Attack and Portishead were explicit about his influence) to later dream pop bands such as Beach House and Tame Impala.

Pop stars, too, have been known to inject a little European class into their set lists: Kylie Minogue reworked his duet with Brigitte Bardot, “Bonnie And Clyde,” for her 2007 single “Sensitized.”

For many of Gainsbourg’s indie heirs, the key touchstone is his seminal 1971 album “Histoire de Melody Nelson.”

“Abroad, he’s often reduced to ‘Je t’aime… moi non plus’, but for connoisseurs of music, it’s all about ‘Melody Nelson,'” his daughter Charlotte Gainsbourg told AFP.

U.S. indie star Beck sampled heavily from that album for his own low-key masterpiece “Sea Change” in 2002.

“There’s an ambition, a conceptual depth to Melody Nelson that’s incredibly hard to pull off but which Gainsbourg does completely… It’s one of the greatest marriages of rock band and orchestra that I’ve ever heard,” Beck wrote in the liner notes for a reissue by U.S. label Light in the Attic.

For others, Gainsbourg helped define their entire approach to music.

“When you’re young and you start a pop band, you think that it all works around guitar-bass-drums. And then you come across ‘Melody Nelson’ and you’re plunged into a film,” said Jinte Deprez, of Belgian group Balthazar.

“Listening to that album, we started to arrange our music differently. We were always influenced by Air but we didn’t know where their sound came from until we realised it was Gainsbourg under its skin,” he added.

In a 2016 article on his influence, U.S. magazine Pitchfork noted the striking way in which different musicians drew different inspirations from his work.

“Some acts are attracted to the sheer sound, others to the roiling undercurrent of sleaze, others find inspiration in the arch appreciation of pop art or perhaps Gainsbourg’s underpinnings in poetry and jazz as signifiers of sophistication,” it said.

It’s a reference that keeps cropping up.

“He has a great honesty, his way of showing respect and understanding to the language and to music,” said Parks.

It was also the try-everything, louche-to-the-point-of-anarchic that made him popular among punks long before he was rediscovered by the indie cognoscenti in the 1990s.

“When you write pop songs, at some point you have no choice but to look at this iconic guy, who said ‘fuck you’ to everything,” laughs Deprez.

For the great man’s daughter, these are moving tributes.

“He would have been so proud,” she told AFP. “There’s all this admiration around him that my father never knew in his lifetime. Success came very late for him so he never took it for granted. He would have been very touched.” JB