BTS most tweeted about musician in US in 2020 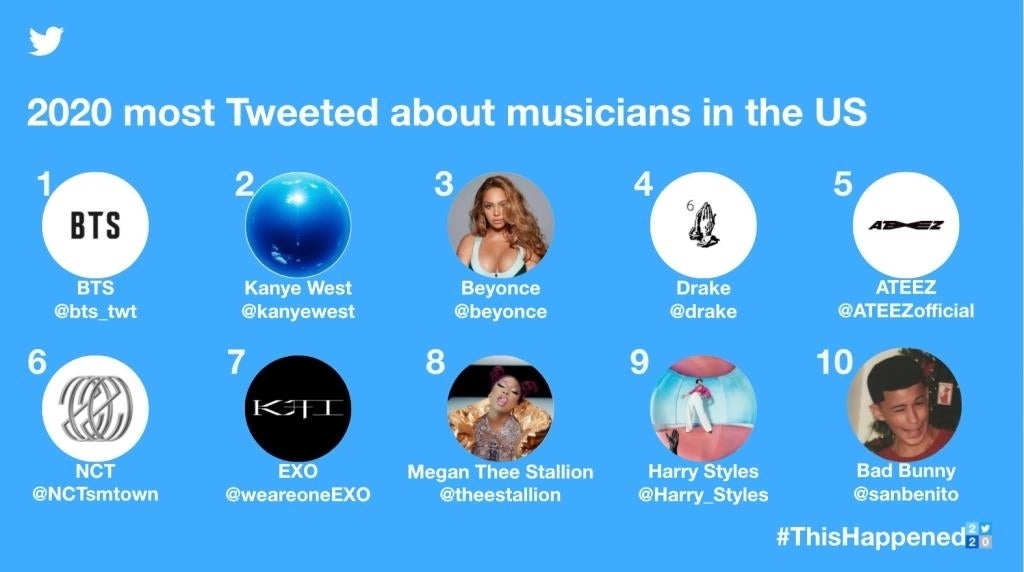 The 2020 most tweeted about musicians in the US are shown in this image provided by Twitter Inc. Twitter Inc. via The Korea Herald/Asia News Network

SEOUL — K-pop sensation BTS was the most tweeted about musician in the United States last year, the band’s agency said Monday.

In a recent survey by Twitter, BTS topped the list of 2020 most tweeted about musicians in the US, followed by Kanye West, Beyonce and Drake, according to Big Hit Entertainment.

Other South Korean bands, ATEEZ, NCT and EXO, also made the top 10, along with Megan Thee Stallion, Harry Styles and Bad Bunny.

BTS made a splash in the US music scene last year as its first English-language song “Dynamite” debuted at No. 1 on Billboard’s Hot 100, becoming the first song by any Korean artist to top the US weekly singles chart.

It was nominated for Best Pop Duo/Group Performance in the Grammy awards in the first nod for an all-Korean pop music act. Yonhap

Read Next
LOOK: Andrea Brillantes is goddess-like in shoot inspired by ‘Birth of Venus’
EDITORS' PICK
Nestlé Philippines’ ‘NESCAFÉ Plan’ bags Grand Anvil at PRSP 56th Anvil Awards
PLDT Home Prepaid WiFi customers now under the care of Smart
WHO: Arrival of vaccines in PH ‘a powerful step’ towards economic recovery, normalcy
Every Filipino home can now be a smart home with realme TechLife
‘Pilgrim of peace’ Pope Francis heads to war-scarred Iraq
QC solon pushes for early voting for senior citizens, PWDs in 2022 elections
MOST READ
Kris Aquino dispels rumors on son Josh getting married, thanks Ogie Diaz for defending him
LTO’s P500-M deal for screws draws scrutiny
Ginebra trades Slaughter to NorthPort for Standhardinger
Royal row with Harry and Meghan heats up before Oprah interview
Don't miss out on the latest news and information.